If your basic assumption – one backed by years of evidence – is that the United Nations is stacked against you, then does it really matter who the ambassador is? 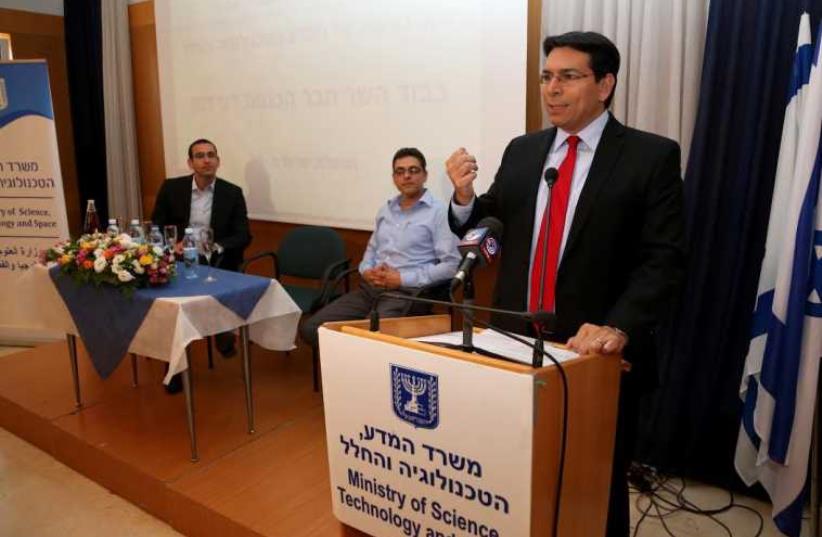 Science, Technology and Space Minister Danny Danon
(photo credit: Courtesy)
Advertisement
Celebrated left-wing author Amos Oz could be named Israel’s next ambassador to the United Nations, and it would not make a whit of difference regarding how that organization treats or views Israel.That, it seems, is what Prime Minister Benjamin Netanyahu was thinking when he decided on Friday to name hard right-wing minister and Likud political rival Danny Danon – the anti- Amos Oz – to that post. To those critics who say that this move was the equivalent of thumbing the nose at the international community, something that will further isolate Israel at the UN, Netanyahu could give a one-word question for an answer: Really? Will the Muslim and non-aligned blocs change their voting patterns against Israel because of the personality of the Israeli ambassador? How many more anti-Israel resolutions can there really be? Is the French decision on whether to bring a particular resolution that Israel objects to strenuously to the Security Council really dependent on who is Jerusalem’s ambassador?If your basic assumption – one backed by years of evidence – is that the United Nations is stacked against you, then does it really matter who the ambassador is? Israel received no better treatment at the UN after then-foreign minister Tzipi Livni appointed Gabriela Shalev, no wild-eyed right winger by any stretch of the imagination, to that post in 2008, than the days when Dore Gold, or Yehuda Lancry, or Netanyahu himself held that position.Netanyahu, who served in the UN from 1984 to 1988, knows the UN well, its prejudices, anti-Israeli patterns and predilections. He is also aware of Israel’s standing both in that organization and the world, and seems to believe that placing Danon there will not really make that much of a difference, because the situation facing Israel at the UN can’t really get that much worse. The appointment – as much as anything else – reflects Netanyahu’s disdain for that organization.It also reflects his cold political calculations: the appointment gives him the opportunity to shunt aside for a number of years a political rival and all-around thorn-in-the-side.But why would Danon want the job? True, he is minister of the relatively minor Science, Technology and Space Ministry, but he is still a minister. He still sits around the cabinet table, and has a vote on the country’s burning issues. What does this job in New York offer him? First of all, it sets him apart from those in his “class” in the Likud who will be jockeying for power in the post-Netanyahu days. It sets him apart from the Ze’ev Elkins and Miri Regevs and Yair Levins, and even the Gideon Sa’ars.It will also give him diplomatic experience.He will rub shoulders with various world leaders who come through town, will make statements on high diplomatic matters, will get a high-profile media platform, and will gain valuable experience in America. All that will serve him well if and when (more likely when, than if) he challenges for the top Likud job down the line.The ambassadorship to the UN did wonders for Netanyahu’s political career in 1984; Danon has to be thinking that it could do the same for him as well.Danon’s appointment was the latest in a spate of ambassadorial appointments that Netanyahu, as foreign minister, made in recent days, sending former Council of Jewish Communities of Judea and Samaria head Dani Dayan to Brazil, former Italian parliamentarian Fiamma Nirenstein to Italy, and – it now seems – his English spokesman Mark Regev to Britain.The common denominator in those three appointments is that all three are very media savvy, and – at least in the case of Regev and Nirenstein – are fluent and articulate in the languages of the countries where they will be posted.Regev is a native Australian, Nirenstein was born in Florence and worked for years as an Italian journalist and then as a member of the Italian parliament.Dayan is Argentinian born, and though Portuguese is not his mother tongue, it is a sister language to his native Spanish, he is very well acquainted with the South American mindset and culture.Their appointments to these three significant countries sends a message that Netanyahu wants as ambassadors those he thinks will not only faithfully present his message – he trusts and knows all three very well – but also people able to present that message in an articulate and forceful manner to the local audience.The ambassadorship to Russia is the next major diplomatic post that needs to be filled. “Ah,” Netanyahu could be forgiven for thinking, “if only I could interest Avigdor Liberman in that job.”