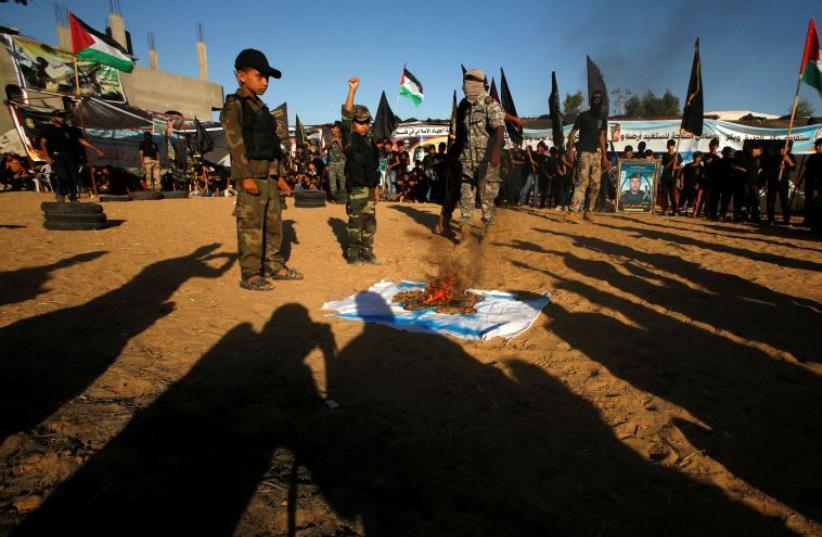 Palestinians burn an Israeli flag during a military-style graduation ceremony at a summer camp organized by the Islamic Jihad Movement in Khan Younis in the southern Gaza Strip
(photo credit: SUHAIB SALEM / REUTERS)
Advertisement
A law allowing terrorists under the age of 14 to be put in prison passed a final vote late Tuesday night.
The law, a temporary amendment for three years, states that anyone convicted of manslaughter, murder or attempted murder may receive a prison sentence, even if he or she is under 14 years old. Previously, the law stated that minors under age 14 may not receive a prison sentence.
Before the convicted killer turns 14, he or she will be kept in a closed institution, and after, he or she will be moved to prison, unless the court decides he should remain in the institution.
Justice Minister Ayelet Shaked said that "unfortunately in this year's wave of terror, young age was not a barrier to committing serious crimes.
"Many became victims of terrorists who were a third of their age," Shaked continued. "The amendment to the law gives the necessary protection of minors against the harm of a prison sentence, while at the same time giving an appropriate response to any terrorist who thinks the courts won't reach him."
MK Anat Berko (Likud) said the law was born of a necessity.
"A society has a right to defend itself from someone whom riders with a knife to the heart, and it doesn't matter if that person is 12 or 15 years old," she stated. "There were many cases of 11-year-old suicide bombers."
Berko expressed hope that the bill will discourage terrorist organizations from using children to kill.