In one of her many previous roles before she became governor-general, Reddy was chairman of the New Zealand Film Commission, which early in 2016 signed a co-production agreement with Israel.

By GREER FAY CASHMAN
NOVEMBER 2, 2017 09:01
President Reuven Rivlin with governor-general of New Zealand, October 30, 2017.Dame Patsy Reddy
(photo credit: MARC NEYMAN/GPO)
Advertisement
Despite a few diplomatic hiccups in the relationship, New Zealand has been consistently supportive of Israel, Dame Patsy Reddy, the governor-general of New Zealand and the highest-ranking New Zealand official to visit Israel, told The Jerusalem Post on Wednesday.Despite having attended 13 New Zealand-related events the previous day on the 100th anniversary of the Battle of Beersheba, in which New Zealand soldiers could claim credit for part of the victory in the Palestine campaign against Ottoman rule, she looked remarkably fresh with no signs of fatigue, when interviewed in her suite at the Waldorf Astoria hotel in Jerusalem.While it is common knowledge that Australia was the first of 33 countries that voted in favor of the UN resolution on the partition of Palestine in November 1947, it is not generally known that New Zealand was one of the three South Pacific countries among the 33. The third was the Philippines, which had given shelter to German Jews fleeing the Nazis.
President Reuven Rivllin meets with New Zealand"s Governor-General Patricia Reddy, October 20, 2017. (GPO:Avi Kanar:Ori Buzaglo)
New Zealand officially recognized Israel in January 1949, but has never had a resident ambassador or even a consulate in Israel, though Israel maintains an embassy in Wellington.The honorary consul of New Zealand in Israel is Gad Propper, who was appointed in June 1998 and who very recently became dean of Israel’s honorary consuls.“We’re very proud of him, he’s done very good work,” said outgoing, Ankara-based New Zealand Ambassador Jonathan Curr, who is due to complete his tenure next month before taking up his new posting as New Zealand high commissioner in Fiji.Prior to the governor-general’s visit, which was actually determined by the results of the recent New Zealand elections, former prime minister Bill English had been scheduled to come for the commemoration of the Battle of Beersheba. Had things worked out that way, he would have been the first New Zealand prime minister to set foot in Israel.Before Reddy’s arrival, the highest-ranking Kiwi official to visit was the foreign minister. Throughout the long period of diplomatic relations between the two countries, only three or four foreign ministers have come to Israel.In terms of high-level exchanges, relations have been marginal, especially in comparison to Australia, which geographically is even further away. Three Australian prime ministers – Bob Hawke, John Howard and Malcolm Turnbull – have visited Israel, along with nearly every foreign minister and numerous parliamentarians from both sides of the House.English was very disappointed to miss out on being in Israel, said Reddy, who admitted that she was thrilled to have the opportunity to come at this time.This was Reddy’s second visit. The first was as a backpacker in 1980, when she visited Tel Aviv and Jerusalem.Asked to compare her two visits, she said that the two cities were now “unrecognizable, except for the great sites of the Old City of Jerusalem.”This time, she said, she had expert guides, and was therefore able to appreciate and understand more.Prime Minister Benjamin Netanyahu with governor-general of New Zealand Dame Patsy Reddy, October 30, 2017. (AMOS BEN-GERSHOM/GPO)Asked if she and her husband, Sir David Gascoigne, would come back on a private visit, the answer was enthusiastically in the affirmative.Because her position is ceremonial, Reddy could not make any political pronouncements, and therefore had to be careful when asked whether she could envisage the day when New Zealand would have an ambassador stationed in Israel.She did permit herself to say that Curr’s was “a strong accreditation to Israel” and that he had contributed “a great deal of time on the ground” in Israel. She did explain that New Zealand is a small nation with a small population and a limited economy, which affects the number of representatives it has abroad.In one of her many previous roles before she became governor-general, Reddy was chairman of the New Zealand Film Commission, which early in 2016 signed a co-production agreement with Israel. The agreement was signed in Wellington.The agreement, which covers film, television, animation and digital productions, is in the mutual interest of supporting domestic film industries, said Reddy. The Israeli model is one that New Zealand wants to emulate, she said.When asked about legal cooperation, Reddy – an eminent and most distinguished lawyer before her appointment as governor-general – said that New Zealand would welcome legal exchanges on an academic level.She is a woman of broad experience in a diverse assortment of executive and nonexecutive roles in both the private and public sectors in the fields of entertainment, communications, petroleum, transport, education, markets, charitable organizations, the arts and more. 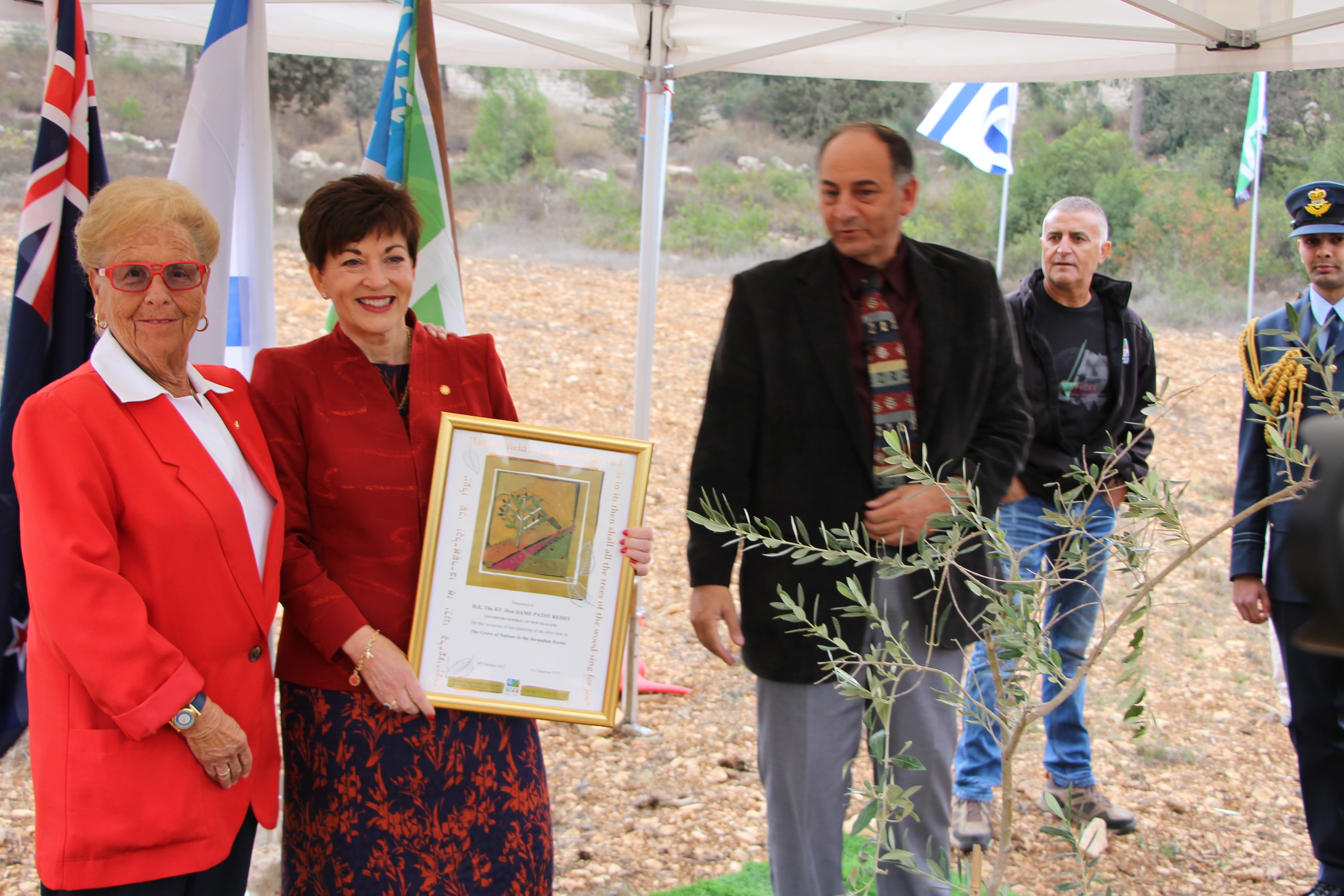 KKL-JNF executives present New Zealand Governor General Dame Patricia Lee Reddy with a commemorative gift, November 1, 2017. (KKL-JNF)During her stay in Israel, Reddy was present at the signing of a $10 million agreement between New Zealand’s Vector Ltd. and Israel’s mPrest, which developed the software behind the Iron Dome missile defense system, and will adapt the technology for civilian use in helping to prevent power outages and to reduce carbon emissions.She believes that there is a lot more potential for hi-tech cooperation and collaboration between the two countries. A lot of connections have already been made through trade missions, she said.In Beersheba, Prime Minister Benjamin Netanyahu and other ministers in attendance were fascinated by the fact that she began each of her addresses in Maori.She was pleased by the reaction of Israelis in the crowd to a taste of Maori culture by way of the haka dancers.A treaty signed by the representative of the British Crown and Maori leaders some 170 years ago provided for New Zealand to become a nationstate with the cultural underpinnings of its indigenous population.“We recognize and embrace Maori culture,” said Reddy, adding that a real effort is being made to encourage the teaching of the Maori language in schools so that all citizens of New Zealand will be able to speak Maori with the right accent, she said.It’s not mandatory for representatives of New Zealand to begin their addresses in Maori, but it’s a practice that has become a tradition both Reddy and Curr embrace.