Wellington's foreign minister clarifies that a letter his country sent Tuesday to Jerusalem was not an apology. 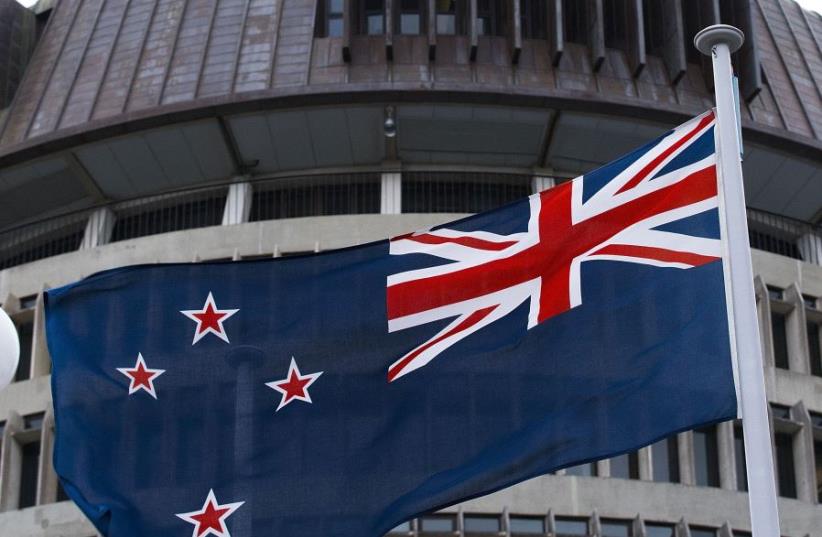 The current New Zealand flag flies on Parliament buildings in Wellington's Central Cusiness District on March 24, 2016.
(photo credit: AFP PHOTO)
Advertisement
New Zealand’s Foreign Minister Gerry Brownlee on Wednesday characterized a letter his country sent to Israel stemming from Wellington’s sponsorship of an anti-settlement UN resolution as a “clarification,” not an “apology.”Grilled on Radio New Zealand about the issue by an interviewer who at one point asked whether the letter did not amount to “pandering” to Israel, Brownlee said it “indicated that New Zealand wanted to resume diplomatic relations with Israel and regretted that there had been fall-out from the co-sponsorship of the resolution.”Israel announced on Tuesday it was sending its ambassador back to New Zealand, ending the crisis between the two countries following New Zealand’s sponsorship – along with Senegal, Malaysia and Venezuela – of the harshly critical UN Security Council Resolution 2334 in December.
UN Security Council passes resolution demanding an end to Israeli settlement building
That resolution, which passed the UN Security Council because US President Barack Obama refused to veto it, essentially delegitimizes any Israeli presence beyond the Green Line, including in Jerusalem, and holds that any Israeli presence beyond the pre-1967 lines lacks legal validity and must be noted and actively opposed by the international community.Israel agreed to normalize ties with New Zealand following a phone conversation between Prime Minister Benjamin Netanyahu and his New Zealand colleague Bill English, and following a letter English wrote regretting “the damage done to Israel-New Zealand relations as a result of New Zealand proposing Resolution 2334 at the Security Council.”Asked in the radio interview whether New Zealand regrets the UN resolution it co-sponsored, Brownlee said the resolution has been passed, but that “what’s important is that the relationship between New Zealand and Israel is [now] on a good footing.” He said that the renewal of ties between two nations that have been friendly for many years will enable a level of discussions on issues affecting both of them “that you can’t have if you are at loggerheads.”Brownlee disputed the claim this was “pandering,” saying it was instead “a mark of respect for a country that is a unique democracy in the Mideast.”Last month Brownlee, who was not foreign minister when the resolution passed, said the resolution was “premature,” a comment that caused some ire in New Zealand’s government, and which English stepped back.On Wednesday the foreign minister – diverting from the spirit of UN resolution – said the settlement issue “is one that the parties that are in dispute need to sort out among themselves, and we’ll do what we can to assist in that process. In the end it is for them to determine.”Jerusalem was stunned by New Zealand’s sponsorship of the resolution because the country’s foreign minister at the time, Murray McCully, was in Israel just weeks before the vote, met with Netanyahu for 90 minutes, and did not mention the likelihood of any such an initiative.Jerusalem believed that McCully was the driving force behind the move, and it was widely expected that relations with Wellington would improve once he left office.Brownlee took over from him on May 2.