According to NGO Monitor, European-funded groups use the “facade of human rights and international law” to blur the lines between “peaceful” or “nonviolent” campaigns and violent “resistance." 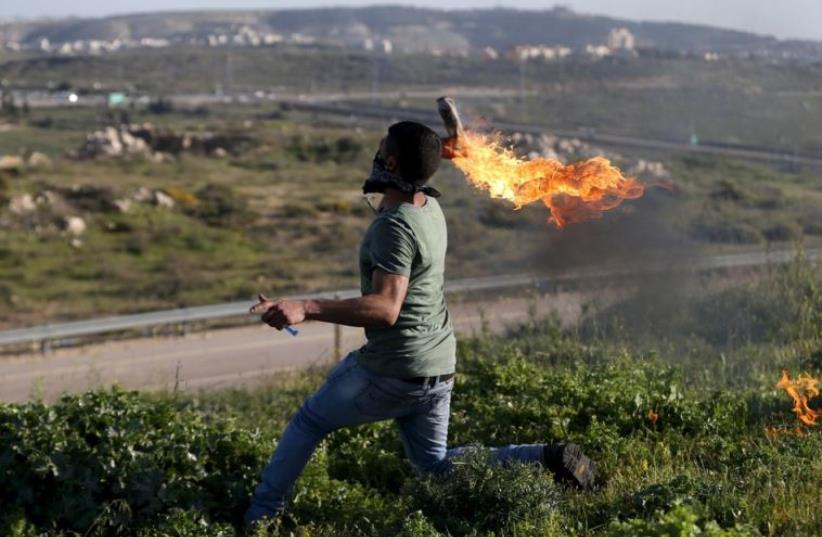 A Palestinian protester hurls a Molotov cocktail towards Israeli troops during clashes near Israel's Ofer Prison near Ramallah
(photo credit: REUTERS)
Advertisement
European governments have been funding NGOs involved in the Arab-Israeli conflict that blur the lines between violence and nonviolence and legitimize attacks against Israeli civilians, according to a report released Thursday by watchdog organization NGO Monitor.According to the report, several European- funded NGOs use the “facade of human rights and international law” to blur the lines between “peaceful” or “nonviolent” campaigns and violent “resistance” – “a term used by Palestinians to refer to armed groups that carry out attacks on Israel.”One example provided in the report named the Spanish NGO Novact – which in 2015 received some €1.3 million in funding from Spain, the UN and the EU for activities related to the Palestinian-Israeli conflict – as one such organization that “whitewashes resistance.”In February 2017, the NGO invited Palestinians Munther Amira and Manal Tamimi of the Popular Struggle Coordination Committee to a conference funded by the Spanish regional government of Catalonia and the EU on “preventing violent extremism.”According to the report, both Tamimi and Amira have incited violence and glorified terrorism numerous times.In August 2015, Tamimi wrote on Twitter: “I do hate Israel ,i [sic] wish a thrid Intefada [sic] coming soon and people rais [sic] up and kills all these zionist settlers everywhere.”Amira has described a violent demonstration organized by him as part of a “struggle against the Nazi occupation.”Both Amira and Tamimi were arrested upon their arrival in Barcelona for suspected terrorist activities.Additionally, the report stated that a number of European-funded organizations also have ties to the Popular Front for the Liberation of Palestine – designated a terrorist organization by the EU, US, Canada and Israel.The report cited the Palestinian Center for Human Rights, which consistently labels terrorist attacks against Israelis as part of the “legitimate right to resist the occupation,” among the NGOs whitewashing resistance and maintaining ties to the PFLP.In April 2016, founder and director of PCHR Raji Sourani, who has served multiple jail sentences, including for his alleged illegal membership ties to the PFLP, declared that “I think resistance is our right and our obligation.”The Addameer association – a leader of campaigns in support of Palestinian prisoners convicted of security offenses, referring to them as “political prisoners” rather than as terrorists – is another organization named in the report.It is very active in Boycott, Divestment and Sanctions campaigns, and several of the NGO’s employees have been convicted on terrorism charges by Israeli courts.The NGO’s chairman and cofounder, Abdul-latif Ghaith, was banned by Israel from traveling internationally, due to his alleged membership in the PFLP, and Khalida Jarrar, Addameer’s vice chairwoman, is a senior PFLP official.In 2015, Jarrar was indicted for various offenses, including active membership in a terrorist organization (the PFLP) and inciting violence through a call to kidnap Israeli soldiers.Another example provided in the report includes funding to Al-Haq, a self-described Palestinian human rights organization, which is a leader in anti-Israel lawfare, lobbying the International Criminal Court for the prosecution of Israelis, and in BDS activities.Al-Haq’s director-general Shawan Jabarin has alleged ties to the PFLP terrorist organization, the report stated, and, as such, has been denied exit visas by Israel and Jordan.“The examples presented in this report are symptomatic of an overall lack of accountability and scrutiny in government funding to NGOs that are politically active in the Palestinian-Israeli conflict,” the report stated. “This results in financial backing for groups that legitimize violence, in sharp contradistinction to the government funders that are otherwise committed to facilitating a negotiated ‘two-state’ vision.”In light of the serious allegations presented, the report also issued a list of recommendations to combat funding to such NGOs.Among its recommendations, NGO Monitor called for the establishment of “working groups with members of the Knesset and European parliamentarians in order to enhance oversight and arrive at mutually agreed upon funding guidelines.”Additionally, the report called for increased coordination and information sharing among Israeli government branches and increased coordination on NGO funding between Israeli security apparatuses and their European counterparts.According to Olga Deutsch, director of the Europe Desk at NGO Monitor, “Following the distribution of NGO Monitor’s report to over 3,000 members of the European, German, Spanish, Swedish, and Swiss parliaments, we hope that decision-makers will bring this troubling phenomenon to the forefront of the public debate.“European and Israeli leaders have a shared interest in carefully choosing which organizations they entrust to help bring about a peaceful agreement,” she added.