'No breakthroughs likely on Israeli-Palestinian front during Biden visit'

Vice president's trip will include visits to the United Arab Emirates, Israel, West Bank and Jordan. 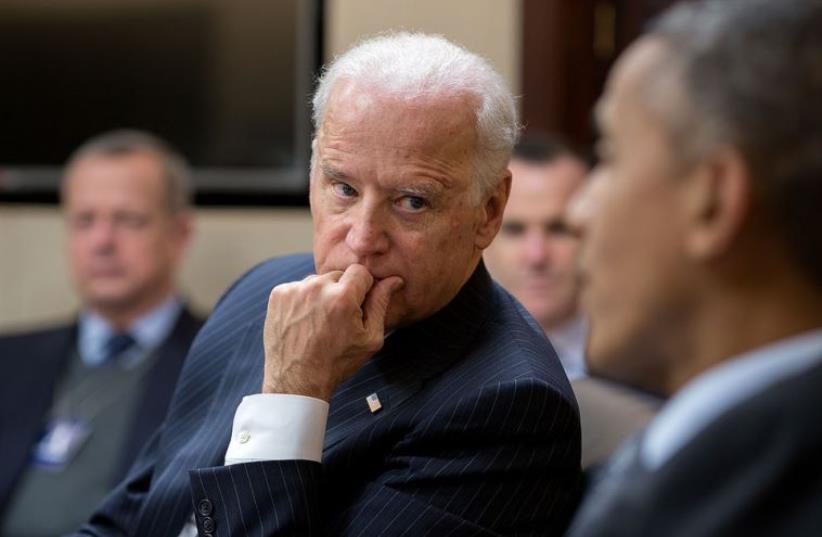 Vice President Joe Biden listens to President Barack Obama in the White House
(photo credit: OFFICIAL WHITE HOUSE PHOTO / PETE SOUZA)
Advertisement
US Vice President Joe Biden leaves on a five-day trip to the Middle East late Saturday, but no major breakthroughs on the Israeli-Palestinian conflict are expected during his visit, a White House official said on Friday.A senior White House official told reporters Friday that Biden would not make any major recommendations on the Israeli-Palestinian issue but would focus on increasing cooperation on a number of issues, including the fight against the Islamic State and the Syrian conflict.Biden's trip will include visits to the United Arab Emirates, Israel, West Bank and Jordan.During the trip, Biden will meet with Prime Minister Benjamin Netanyahu in Jerusalem and Palestinian President Mahmoud Abbas in Ramallah, the White House said. Biden will also meet with Jordan's King Abdullah in Amman, the White House said earlier.Biden will arrive on Tuesday for a two-day visit, the Government Press Office announced on Wednesday.Biden will arrive at 5:20 p.m., but there will be neither a welcoming ceremony nor any speeches at the airport, according to the announcement.He is expected to meet separately with President Reuven Rivlin and Prime Minister Benjamin Netanyahu the next day, where there are expected to be short statements to the media, but not a press conference. No other public events, such as a speech or press conference, have been announced.The current visit comes against the backdrop of the US presidential race, and an interest by the administration to underline its strong security support for Israel.Biden is considered among Israel’s strongest advocates inside the Obama administration.During a speech in Washington in December 2014 at the annual Saban Forum, as US-Israeli tension over a possible nuclear deal with Iran was on a sharp incline, Biden said, “If there weren’t an Israel we would have to invent one.”In a fiercely pro-Israel address, he said: “We always talk about Israel from this perspective, as if we’re doing [them] some favor. We are meeting a moral obligation. But it is so much more than a moral obligation. It is overwhelmingly in the self-interest of the United States of America to have a secure and democratic friend, a strategic partner like Israel. It is no favor. It is an obligation, but also a strategic necessity.”The vice president noted then that he and Netanyahu have been friends for more than 30 years, kidding that he “loves” the prime minister, even though he has disagreed with him intensively on many issues.Among the issues expected to be discussed during the upcoming visit is the Memorandum of Understanding, the agreement spelling out Washington’s security aid to Israel over the next decade that is currently being negotiated.The current MoU, which expires in 2018, provided some $30 billion worth of military aid, and the final figure for the new MoU is expected to be considerably higher.Biden has shown an interest in using the off-shore natural gas finds as a way to leverage stability in the eastern Mediterranean, and in pushing forward Turkish-Israeli reconciliation. He discussed both those issues when he last met with Netanyahu in Davos on January 21, on the sidelines of the World Economic Forum. From there he went to Istanbul and had talks with Turkish President Recep Tayyip Erdogan.Israeli officials said that they did not know of any plans to announce completion of the long-discussed Israeli-Turkish reconciliation deal while Biden was in the country. US President Barack Obama brokered a telephone conversation between Netanyahu and Erdogan on the last day of his sole visit here as president in 2013.Biden was last in Israel in 2014, when he attended the funeral of late prime minister Ariel Sharon. During that trip, he also held a meeting with Netanyahu. Prior to that, he was here in 2010 for a visit that turned out to be a diplomatic disaster after the Interior Ministry announced plans to build 1,600 housing units in the northern Jerusalem neighborhood of Ramat Shlomo, beyond the Green Line. This incident strained ties with Washington for months.Herb Keinon contributed to this report.