No love lost for Bibi in Australia

Netanyahu to encounter protests during official visit down under. 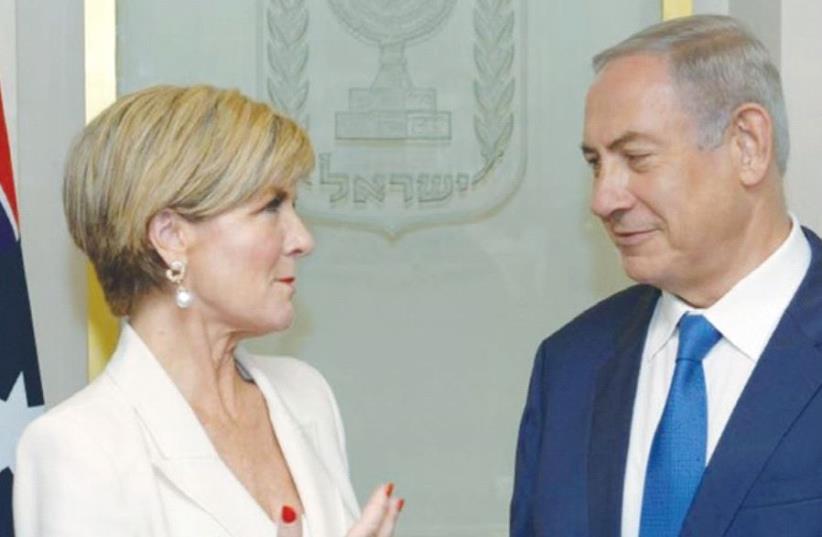 PRIME MINISTER Benjamin Netanyahu meets with Australian Foreign Minister Julie Bishop at the Prime Minister’s Office in Jerusalem last September
(photo credit: AMOS BEN-GERSHOM/GPO)
Advertisement
Prime Minister Benjamin Netanyahu’s visit to Australia this week was supposed to be a positive, official trip to further cement Australia’s bipartisan support for Israel.Moreover, it is historic in that Netanyahu is the first sitting prime minister of Israel to make a down under visit.  He has been to Australia before – but not as prime minister.Another important aspect of the visit is that this year is the 100th anniversary year of the Battle of Beersheba in which the Australian and New Zealand light horse regiment triumphed over Turkish troops, paving the way for a British victory that meant the end of Ottoman rule, and more importantly from a Jewish and Israeli standpoint, enabling  approval and transmission of what has become known as the Balfour declaration.Netanyahu had been scheduled to visit Australia in July, 2014, but cancelled out in June due to the kidnapping of three Israeli yeshiva students Eyal Yifrah, Gil-Ad Shaer and Naftali Fraenkel who were subsequently murdered.President Reuven Rivlin was scheduled to visit Australia in March of last year, but cancelled in February and went to Russia instead to meet with President Vladimir Putin.
Australian FM Julie Bishop in Israel
The Australians were far from pleased, and Rivlin subsequently apologized personally to Australian Foreign Minister Julie Bishop when she was in Israel last September.Despite the bipartisan support for Israel in parliament, Netanyahu will discover that he’s not exactly a welcome guest.Australian and British media reports indicate that protest demonstrations against Netanyahu’s visit  have been planned for Sydney, Melbourne and Canberra, in addition to which 60 prominent Australian business and religious leaders, jurists, academics, entertainers and former politicians have issued a statement in which they express opposition to Netanyahu’s  visit on the grounds that his policies “provoke, intimidate and oppress” the Palestinian people and are distancing  the Middle East from peace to an even greater extent than before.  Among the signatories to the statement are former Federal Court judge Murray Wilcox, former Solicitor General Gavan Griffiths, and several Queen’s Counsels.The statement which calls for Prime Minister Malcolm Turnbull to rethink his support for Israel, emphasizes that Netanyahu’s policies “are inconsistent with Australian values and beliefs and we should not welcome him here.”Melbourne Jewry, which is the strongest and most ardently Zionist Jewish community in Australia, is peeved because Netanyahu  has reportedly cancelled the Melbourne leg of his visit on the excuse that his visit to the US last week to meet with President Donald Trump,  took up the time that he had intended to give to Melbourne.The Australian Jewish News under the headline ‘Melbourne: Bibi not coming’ reported that Sharene Hambur, the president of Zionism Victoria said that it was disappointing but understandable given the limitations placed on him by his reduced time in Australia.Yet according to a report by Herb Keinon in Sunday’s Jerusalem Post, Netanyahu will spend five days in Sydney including Shabbat. But given the fact that it is summer now in Australia and Shabbat candle lighting in Melbourne is at 7.49 p.m., Netanyahu could just as easily have taken a one hour 1 p.m. flight from Sydney to Melbourne, addressed the Jewish community at 3, p.m. and either stayed in Melbourne over Shabbat or taken a 4.30 or 5 p.m. flight back to Sydney.|There are Melbourne Jews who divide their time between Melbourne and Israel, who before it was known that Netanyahu would not be going to Melbourne after all, flew home in time to be amongst his meeters greeters.  Some of them will in all probability fly to Sydney to listen to his address there, but there are many who generously  support various Israeli causes, who regard Netanyahu’s by-passing of their city – which incidentally is located in a state that has a Jewish Governor – as a slap in the face.