“A man who did so many great things for Israel should be pardoned,” Olmert’s brother says. 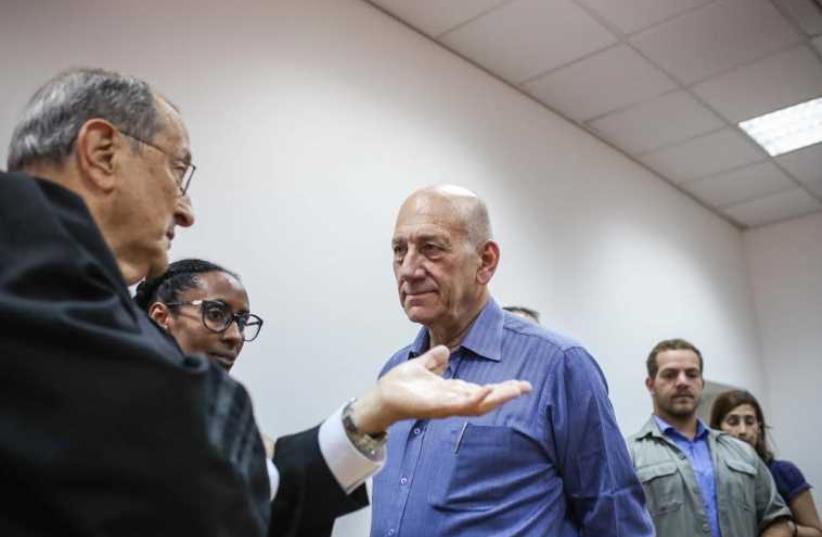 Ehud Olmert speaking with his lawyers, May 25, 2015
(photo credit: NOAM MOSKOVICH)
Advertisement
Members of former prime minister Ehud Olmert’s family expressed satisfaction with the reduction of his prison sentence from six years to a year-and-a half Tuesday but, nonetheless, said they intended to seek a pardon from President Reuven Rivlin.“A man who did so many great things for Israel should be pardoned,” Olmert’s brother Amram told Channel 1. “After his sentence was reduced significantly, it is going in that direction.”The family outrage at Tel Aviv District Court judge David Rozen who had ordered the six-year sentence.Rivlin and Olmert were bitter enemies in Jerusalem politics and then national Likud politics for decades. Channel 2 reported that Rivlin has said in the past that a leader falling from grace and expressing regret are criteria for him issuing pardons.Zionist Union MK Shelly Yacimpovich blasted Olmert’s statement to the press following the ruling, saying the joy he expressed over the Supreme Court’s decision proved he did not regret his crime.“Olmert’s shameful reaction and the delusional and arrogant show he put on outside the court is disconnected from reality and shows that he has not repented,” she said. “Maybe in February when he enters jail and puts on a prison uniform reality will set in. He is not acting like a prime minister who has been convicted, will soon enter prison and still has cases hanging over him. It looked like he was even going to announce that he is running for prime minister from jail. Thankfully, the public understands the extent of his corruption and the horrible damage it has caused the state.”Public Security Minister Gilad Erdan (Likud) called it a “sad day for Israel” because a former prime minister was being sent to prison, but Yacimovich disagreed.“This is not a sad day for the state. The sad days for the state were when he was taking bribes. This is an optimistic day of defeating corruption, a day on which everyone knows that all are equal before the law, whether they are rich, poor, weak or strong,” she said.Opposition leader Isaac Herzog said the judges had sent a message that “everyone must learn lessons not to use their power for their own personal benefit,” adding that the Court had “built a dam to stop the corruption in Israel.”