The summit in Liberia is expected to last for only five hours, with Netanyahu scheduled to fly there late Saturday night. 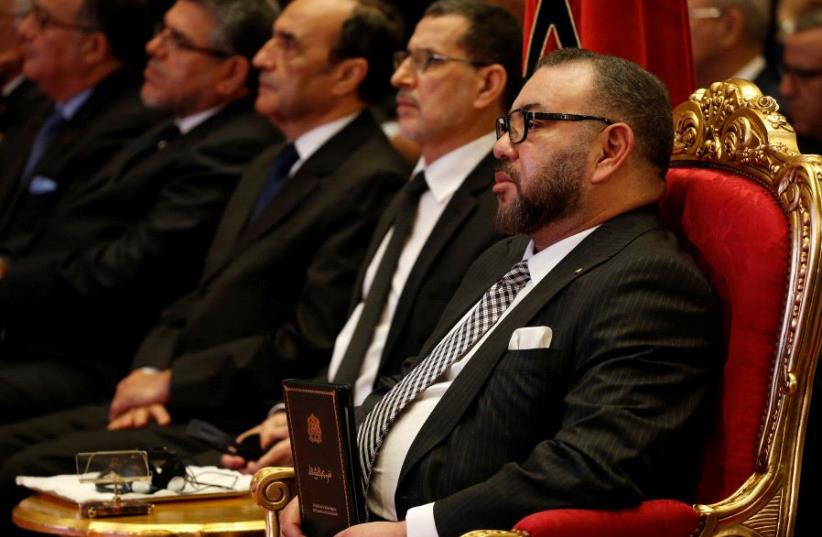 Morocco's King Mohammed VI (R) attends a signing ceremony with the Nigerian delegation, on the Nigeria-Moroccan gas pipeline project that will connect the two nations as well as some other African countries to Europe, at the King's Palace in Rabat, Morocco May 15, 2017
(photo credit: REUTERS)
Advertisement
Prime Minister Benjamin Netanyahu is expected to cross paths with the leaders of three countries with which Israel has no diplomatic ties – including Morocco – when he attends a summit of an African sub-regional organization in Liberia on Sunday.A senior delegation from Morocco, which will include that country’s foreign minister and possibly even King Mohammed VI, will be attending the summit of the 15-member Economic Community of West African States (ECOWAS).Unlike large international meetings that take place at the UN, which Netanyahu participates in each year, this one is relatively small and taking place in a Monrovia hotel, making more likely the possibility of informal meetings with the Moroccan delegation, or the leaders of Niger and Mali – the two other countries with which Israel does not have diplomatic ties and which are scheduled to be represented at the meeting.At the last ECOWAS meeting held in December in Nigeria, Netanyahu was officially invited to this summit to talk about Israel’s developments in agriculture. Diplomatic officials said it is clear he will also use the opportunity to speak about the mutual benefits of strengthening Israeli-African ties.This will be the premier’s second visit to Africa within a year, having met the leaders of seven East African states during his trip to Uganda, Kenya, Rwanda and Ethiopia last July. In October he is expected to travel to Togo, which has emerged along with Rwanda as one of Israel’s closest friends in Africa, for an African-Israel summit expected to attract leaders from some 25 countries across the continent.Morocco is sending a delegation to the Liberian meeting as part of its bid to gain membership in the 15-member group representing countries with a total of some 320 million people.Because the bid is so important to Morocco, there is speculation that the king might attend, though his participation has not yet been confirmed.In addition to Mali and Niger, the other ECOWAS member countries are Benin, Burkina Faso, Cape Verde, Côte d’Ivoire, Gambia, Ghana, Guinea, Guinea- Bissau, Liberia, Nigeria, Senegal, Sierra Leone and Togo.Netanyahu is expected to be one of only five speakers at the summit, with the others being Liberian President Ellen Johnson Sirleaf, currently the president of ECOWAS; ECOWAS Commission head Marcel Alain de Souza, who visited Israel and met with Netanyahu last summer; the new head of the African Union, Moussa Faki, from Chad; and – if he attends the meeting as expected – UN Secretary-General Antonio Guterres.While Israel currently holds observer status in ECOWAS, it does not have a similar status in the African Union, something it lost in 2002 when the Organization of African Unity changed its name and structure and became the African Union. Israel’s efforts over the last two years to regain that status – a status that the Palestinian Authority does enjoy – was thwarted by South Africa’s Nkosazana Clarice Dlamini-Zuma.Dlamini-Zuma, the ex-wife of South African president Jacob Zuma, was chairwoman of the African Union Commission from 2012 until January 2017, when she was replaced by Faki.Although Israel does not have diplomatic ties with Muslim-majority Chad, diplomatic officials said that for Israel to gain African Union observer status with a Chadian diplomat at the head of the organization would be easier than it was with a South African, since South Africa – despite its diplomatic relations with Israel – has been actively trying to thwart Israel’s diplomatic advances into the continent.Former Foreign Ministry director- general Dore Gold, who met last summer with Chad’s president in a sign of a warming of ties between the two countries that has not yet matured into full diplomatic relations, said that Israel began to cultivate closer ties with subregional organizations such as ECOWAS after South Africa essentially boxed it out of participation in the African Union.He said that the hope was that intensifying relationships with subregional groupings would eventually lead to Israel reengaging with the entire 55-member African Union.Gold said that Africa is “very important” for Israel, both because of its size and its proximity.“The countries there have a tremendous interest in upgrading ties with Israel,” he said, “either because of our water management technology, agricultural knowledge or security considerations. Don’t forget, jihadi organizations are spreading all over the continent now.”The summit in Liberia is expected to last for only five hours, with Netanyahu scheduled to fly there late Saturday night, and fly back home the next evening, without spending the night there.