This would be the first visit by an Israeli prime minister to Sub-Saharan Africa since Yitzhak Shamir visited four west African states in 1987. 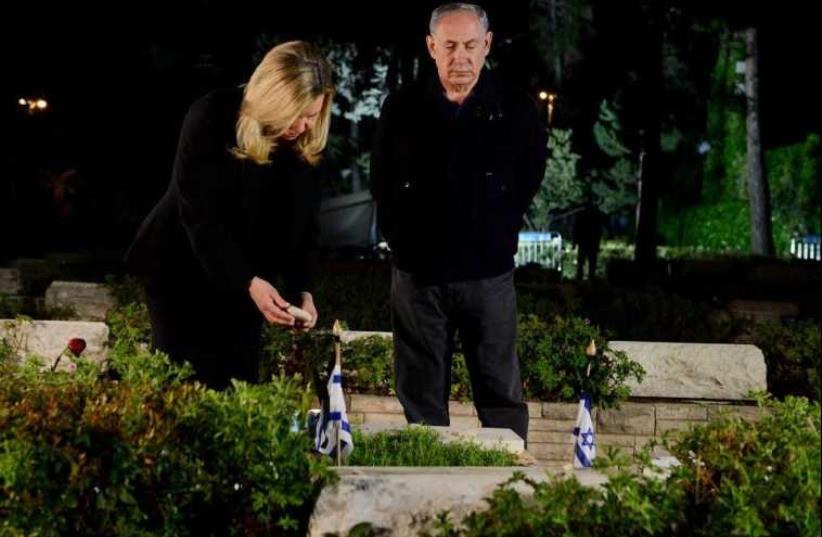 Prime Minister Benjamin Netanyahu (R) and his wife, Sara, pay respects to the premier's late brother, Yoni Netanyahu, who was killed during the Entebbe raid
(photo credit: AVI OHAYON - GPO)
Advertisement
Prime Minister Benjamin Netanyahu is planning a landmark visit to Uganda and Kenya this summer to mark 40 years since the July 4, 1976, Entebbe raid during which his brother, Yonatan, was killed in the legendary hostage rescue operation, The Jerusalem Post has learned.The trip is expected to be among the issues on the agenda when Kenyan President Uhuru Muigai Kenyatta arrives for a visit next week.This would be the first visit by an Israeli prime minister to Sub-Saharan Africa since Yitzhak Shamir visited four west African states in 1987.While Netanyahu had plans to visit Kenya, Uganda and Ethiopia in 2011, that trip was scuttled because of security concerns.The failure of Israeli prime ministers to visit Africa is a sore point with African ambassadors stationed here, who regularly urge Israel not only to talk about the importance of ties with Africa, but actually to show the importance of these ties through deeds, including prime ministerial visits.A visit by Netanyahu would have added importance now, as Iran – and its Hezbollah proxy – continue to try to make inroads into the continent.Netanyahu visited Uganda in 2005, before becoming prime minister for a second time in 2009, and dedicated a plaque in his brother’s’ memory on the wall of the old terminal building at the Entebbe International Airport.Netanyahu speaks often about the need to cultivate closer ties with Africa, Latin America and Asia, and on Sunday – during a speech to the Conference of Presidents of Major American Jewish Organizations – discussed the possibility of getting these regional blocs to change their voting patterns on Israel in international forums.Already an increasing number of African states are either abstaining or, at times, voting for Israel in key international votes.For instance, at a crucial vote in September at the IAEA that would have forced Israel to open its nuclear facilities to international inspectors, four African states – Burundi, Kenya, Rwanda and Togo – voted for Israel, and another 15 abstained on the motion that was voted down.Rwanda and Nigeria were critical in 2014 in preventing a resolution that would have set a 2017 deadline for a full Israeli withdrawal from the West Bank from passing through the UN Security Council.In a related development, Foreign Minister Director-General Dore Gold on Tuesday signed a Declaration of Intent in Berlin with Thomas Silberhorn, the parliamentary state secretary of the Ministry of Economic Cooperation and Development, outlining joint Israeli-German development projects in Africa.According to the plan, the two countries will cooperate together on water and agricultural projects in six African states: Kenya, Burkina Faso, Ethiopia, Ghana, Cameroon and Burundi. The two countries have cooperated on smaller projects in the past in Africa.Gold said the program would start with those six countries, with the hope that it would then expand to other African countries as well.