PM to Moscow to discuss Syria

This will be the two leaders’ third face-to-face meeting in seven months. During this same time period Netanyahu has met US President Barack Obama once. 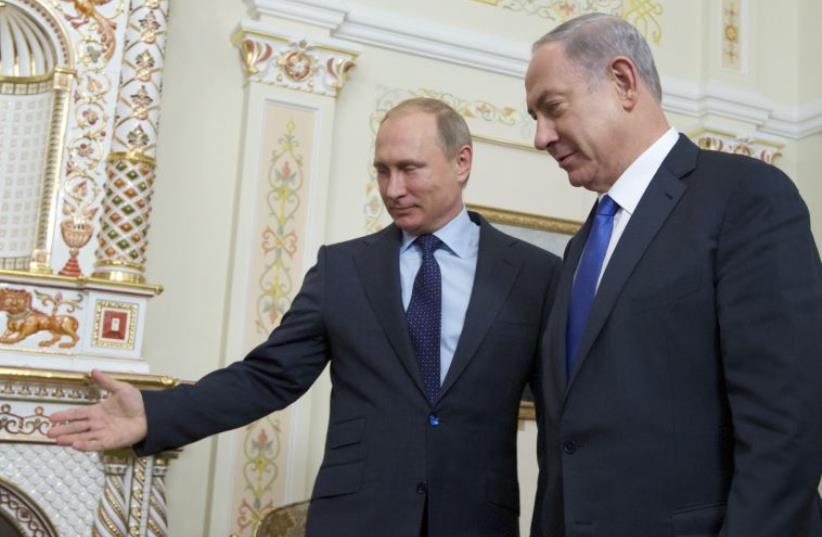 Netanyahu and Putin
(photo credit: IVAN SEKRETAREV / POOL / AFP)
Advertisement
Prime Minister Benjamin Netanyahu will fly to Moscow on Thursday to meet with Russian President Vladimir Putin for discussions expected to focus on Syria.This will be the two leaders’ third face-to-face meeting in seven months. During this same time period Netanyahu has met US President Barack Obama once.The main focus of the Kremlin parley, according to the Prime Minister’s Office, will be coordination to avoid accidental incidents between Israeli and Russian forces acting in Syria. Netanyahu and Putin established a mechanism to avoid conflict, when Netanyahu flew to Moscow in September, soon after Russia began its active military engagement in the fiveyear- old Syrian civil war.Netanyahu’s retinue will include OC Air Force Maj.-Gen Amir Eshel; Immigration and Absorption Minister Ze’ev Elkin, who will serve as translator; deputy National Security Council head Yaakov Nagel; military attaché Brig.-Gen Eliezer Toledano; and bureau chief David Sharan.In addition to the mechanism to avoid conflict, the talks will concern the future of Syria, and the Syrian peace conference taking place in Geneva.Netanyahu is expected to reiterate what he said Sunday when he held a cabinet meeting on the Golan Heights – that Israel will not relinquish the strategic plateau.He is also expected to reiterate Israel’s position that any future agreement in Syria must include the removal of Iranian, Hezbollah and Islamic State forces now stationed in the country.Netanyahu is also expected to raise the issue of Russian arms sales to Iran, as well as preventing the transfer of state-of-the-art weaponry to Hezbollah.