“We will continue to work for a greater presence of police on the roads, in Arab communities and in all city centers.” 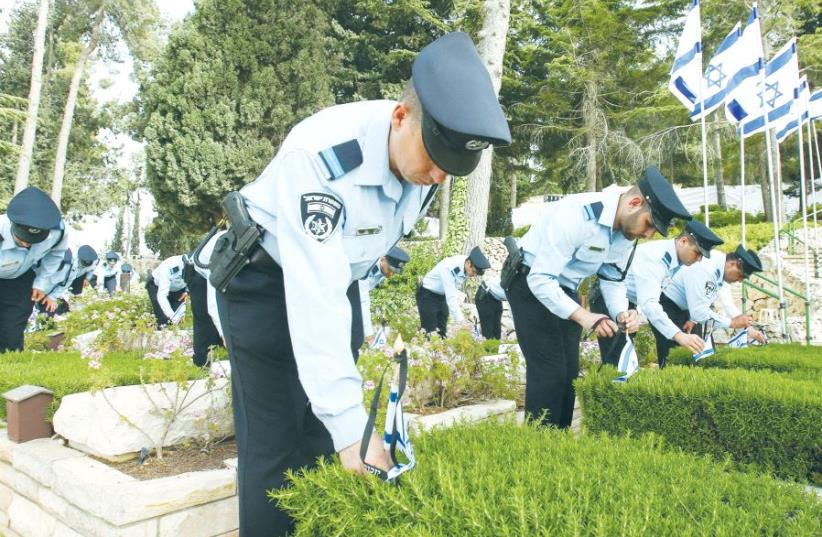 POLICE OFFICERS place flags on the graves of slain comrades at Mount Herzl in the capital yesterday
(photo credit: MARC ISRAEL SELLEM/THE JERUSALEM POST)
Advertisement
Israel Police on Wednesday commemorated the lives of the 1,467 officers who have died during or as a result of their service at a ceremony on Mount Herzl that included the bereaved families of slain officers and Prisons Service staff.“Since last year, we have visited the cemeteries around the country to accompany 15 other victims to the afterlife – fathers and sons, brothers and sisters, husbands and wives – brothers of the police family,” Police Commissioner Insp.- Gen. Roni Alsheich said at the ceremony.“The home front has become more front line,” he said, requiring the police to “stretch to its limits to meet complex challenges.”Earlier in the day, at a police ceremony marking Israel’s 69th Independence Day, Alsheich said: “Over the years, we have been repeatedly required to fight with our bodies for our right to exist as a sovereign state and a free people in our country,” and that “a heavy price has been paid in the blood of our officers and soldiers.”He added that police must take an active role in “shaping ethical norms” and be the “moral guards” of Israel.“We, the commanders and policemen of the Israel Police have the privilege to take part in preserving the security of the State of Israel, in protecting democracy, the values of human dignity and rights and in strengthening the resilience of Israeli society,” he said.Also speaking at the early Independence Day ceremony, Public Security Minister Gilad Erdan said the police are working to increase the number of traffic officers and policing in Arab-Israeli communities.“We will continue to work for a greater presence of police on the roads, in Arab communities and in all city centers,” Erdan stated, “At the same time, we will work to provide you [officers] with better tools for carrying out the tasks, more authority in legislation and more technology.”The statements come almost a month after police officer Moshe Cohen was indicted after being caught on video violently beating an Arab truck driver in east Jerusalem.Cohen’s actions, which were condemned by the police, sparked a large backlash from Israel’s Arab community.A ceremony planned for Thursday to inaugurate 10 community policing stations in the southern Beduin town Arara Banegev was canceled this week amid pressure to prevent Erdan from appearing in the community, which is angry about Erdan’s handling of the Umm al-Hiran affair.The incident left a policeman and Beduin teacher dead in disputed circumstances and initially was condemned as a terrorist attack by Erdan.Also on Wednesday, new ranks and appointments were assigned to senior officers, including Shuki Tachocha, the first Circassian officer to make the rank of deputy-chief, the third-highest police rank.Tachocha will serve as commander of the new northern Amakim Subdistrict, which has yet to be inaugurated.Dep.-Ch. Shmuel Boker was also appointed commander of the Northern District