More than 10,000 officers from a wide range of units worked in close coordination with US Secret Service to ensure Trump’s historic trip to Jerusalem was safe. 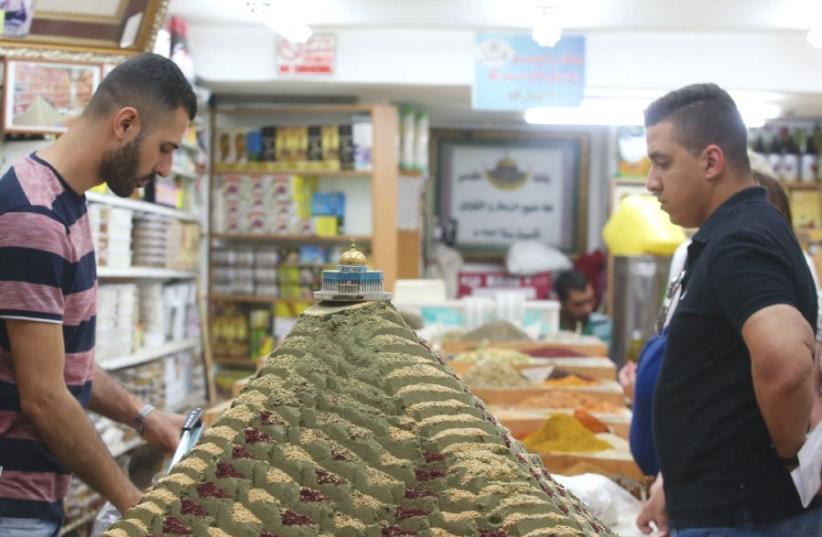 Muslim residents of Jerusalem’s Old City prepare on Thursday for Ramadan, which begins today.
(photo credit: MARC ISRAEL SELLEM/THE JERUSALEM POST)
Advertisement
The Israeli National Police on Thursday lauded both the protection given to US President Donald Trump by Operation Blue Shield, and the security provided to more than 50,000 participants in Jerusalem Day parade who marched to the Western Wall.According to police, more than 10,000 officers from a wide range of units worked in close coordination with the Shin Bet (Israel Security Agency) and the US Secret Service to ensure Trump’s historic trip to Jerusalem was safe.“Police worked down to the last details to complete the operation with no incidents whatsoever on all levels of security for each area the US president visited,” police spokesman Micky Rosenfeld said on Thursday.“Security also took into consideration that Trump was the first [sitting] US president to ever visit the Western Wall, and cordoned off areas to ensure his safety at all times. Border police and special patrol units were posted at every location, with backup units on the scene.”Rosenfeld said an elite counter-terrorism unit also followed Trump’s convoy from location to location to provide a rapid response, if necessary.Additionally, a temporary police central command control center manned by more than 100 officers was set up at the International Convention Center toward the western entrance to the capital and overseen by the police commissioner throughout the two-day visit.“There were representatives from each unit at the command center to coordinate all activities and operational decisions in real time, which were made by the police commissioner himself,” said Rosenfeld. “There were no specific warnings of violence that we received throughout the operation.”In terms of the Jerusalem Day Flag Parade, which had a record turnout, Rosenfeld said at least 5,000 officers were stationed in the center of town all the way to the Western Wall in the Old City, a few kilometers away.“Police and sniper units were on rooftops throughout the parade route to closely watch and prevent any incidents from taking place, such as stone-throwing or any attacks on participants in the celebration,” he said.“Because of the large numbers entering the Old City, for the first time police opened entrances other than Damascus and Jaffa gates. Police units were stationed throughout the route, which was closely guarded, although local Arab shops remained open throughout the procession.”Rosenfeld said the only disturbance involved a protest by left-wing activists who attempted to block Damascus Gate. They were removed by police, detained, questioned, and released.Meanwhile, police preparations for Ramadan, which commences on Friday and lasts for one month, are being finalized, he said.“For Ramadan there will be heightened security for all four Friday prayer services on the Temple Mount, and police are making preparations to allow the thousands Muslims to safely enter the Old City,” Rosenfeld said.“Security arrangements will be in all areas, including all border-crossing checkpoints such as the Kalandia and Bethlehem crossings, with coordination with the IDF and Shin Bet.”