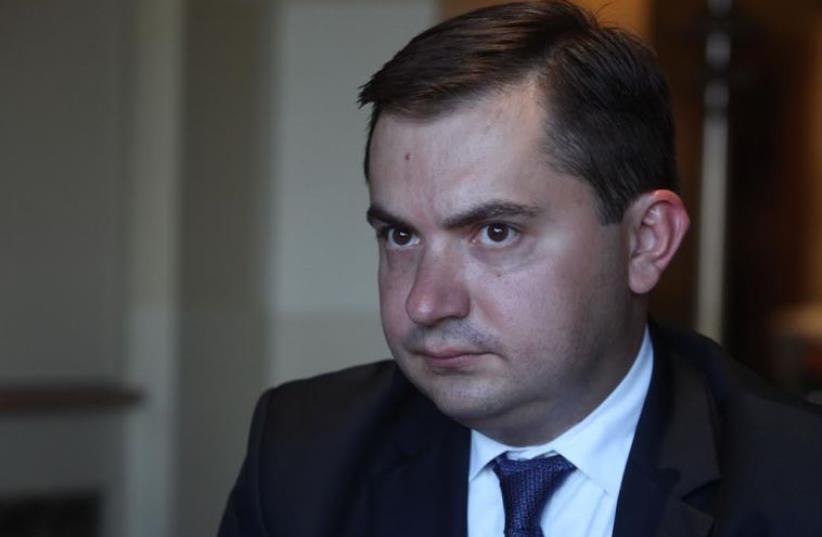 Polish Undersecretary of State Konrad Pawlik
(photo credit: MARC ISRAEL SELLEM)
Advertisement
Warsaw and Jerusalem largely see eyeto- eye on the Ukraine crisis, Polish Undersecretary of State Konrad Pawlik said on Tuesday.Interviewed by The Jerusalem Post following a briefing he gave to the Israel Council on Foreign Relations, Pawlik said that he had held discussions on the issue with representatives of Israel’s National Security Council and that the parties “share several assessments over the situation in Ukraine.”Both countries “have the same understanding of the responses to the situation,” he continued, stating that neither had recognized the Russian annexation of Crimea and that both are closely monitoring developments in separatist held regions of Eastern Ukraine.Both Israel and Poland have absorbed refugees fleeing from the Ukrainian conflict, albeit with much fewer coming here, and while Poland has frequently taken the lead in decrying what it sees as Russian aggression against former Soviet possessions, Israel has taken a more neutral approach.Officials have explained Israel’s neutrality in the Russian-Ukrainian conflict as being motivated by a desire not to antagonize Russia, which – if it so desired – could cause Israel enormous headaches when it comes to issues such as Middle East arms sales, Syria and Iran.However, it is possible that Israel’s role in the conflict may change. Jerusalem has protested against the planned sale of advanced Russian S-300 air-defense missiles to Iran. In April, Israeli defense officials told the news site nrg.co.il that Israel may respond by selling arms to Ukraine and Georgia. Prime Minister Benjamin Netanyahu is reportedly scheduled to visit Ukraine soon and host its president in Jerusalem.Pawlik denied separatist claims that his government is providing lethal aid to Ukrainian forces, stating that Warsaw contributes only “humanitarian” aid and “logistic equipment” such as sleeping bags and comestibles that “are not even considered non-lethal or lethal, they are just humanitarian.”Asked about the possibility of Israel introducing its weapons into the conflict, he said that he does not “want to assess Israel’s policy in this regard,” adding that the idea of arming Ukraine is much less discussed in Europe now than it was before the signing of the Minsk II agreement in February.While Jewish leaders in Ukraine have largely denied Russian claims that their government is either fascist or neo-Nazi, there have been concerns over Kiev’s willingness to honor historical nationalist figures with Nazi ties.In April the Ukrainian parliament passed a bill recognizing a World War II-era armed group that collaborated with the Nazis and which massacred Jews and Poles.Asked if Ukraine needs to reconcile itself to its Holocaust history as Poland has striven to do since the end of the Cold War, Pawlik said that he thinks “we are observing two phenomena in Ukraine. First of all, it is still a state in the making, still in the process of formulating and strengthening its own statehood. Secondly, its national identity is also under the process of formulation.We should remember that Ukraine has never existed before. This is the first time that this state exists as an independent state for a long period of time. So they are in the process of formulating several identity issues,” he said.Beyond providing support for Ukrainian anti-corruption efforts, his country has also been involved in what he called “historical dialogue and reconciliation” with its neighbor, especially in light of past grievances.Polish and Ukrainian historians, politicians and others are in contact and “this is a good start,” said Pawlik. “What we indicate to our Ukrainian partners is that as we already created such a good platform of reconciliation process, we should do any efforts to strengthen and facilitate this process, not to hamper it.”Warsaw has indicated to Kiev that legislation such as that recognizing extreme Ukrainian nationalists “could influence the process of the dialogue” and that it supports an amendment to the law excluding recognition to anyone who committed crimes.“So that is why these two issues about penalization and war crimes are the most critical for us. We made it clear to Ukrainian side, and we were assured that certain changes or amendments will be considered. Whether this which we would wish to see, the time will show,” he said.

Herb Keinon and JTA contributed to this report.
Advertisement
Subscribe for our daily newsletter