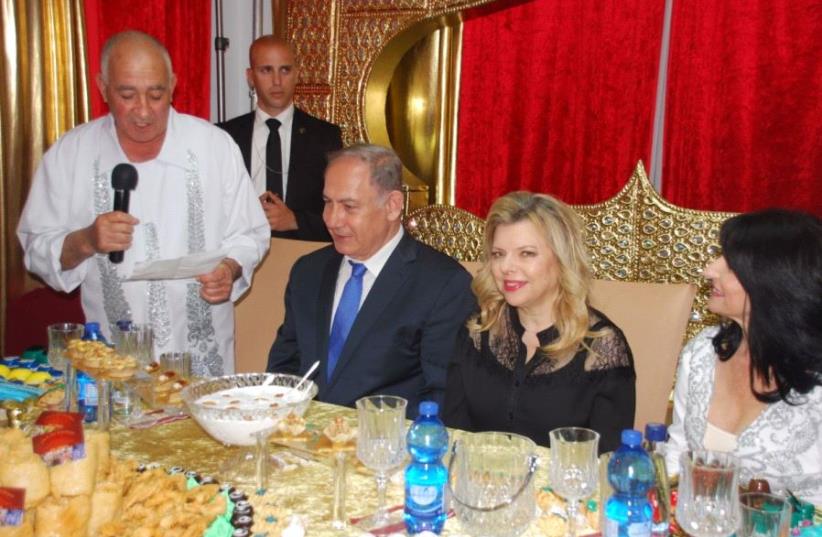 Prime Minister Benjamen Netanyahu and his wife Sarah celebrate the Mimouna in Hadera
(photo credit: GPO)
Advertisement
Besides the usual politicians seeking photo opportunities and Israelis seeking long-awaited hametz, Mimouna celebrations were attended on Monday night by new clientele: ambassadors and other diplomats from around the world.Mimouna is a three-century- old North African Jewish celebration that marks the end of Passover. It has been popularized in Israel by Jews from Morocco.The annual Mimouna event of Likud central committee member Nisim Zagouri in Holon attracted Likud MKs as it does every year. But the traditional moufletas (pancakes) he made in honor of the holiday were also munched on by 15 diplomats, including Hungarian Ambassador Dr.Andor Nagy and envoys from the United States, the United Kingdom, the European Union, France and Taiwan.The decision to showcase Mimouna to the world was the initiative of Eli Hazan, the Likud’s deputy director-general for public and foreign relations, who has made an effort to build ties between Israel’s ruling party and rightwing parties across the globe.“The goal is to give them a peek into what is really happening in Israeli society,” Hazan said. “When Moroccan immigrants first came, people made fun of their traditions.But now Mimouna is welcomed and has been adopted by Israel as a whole as a proud symbol of its multiculturalism.”
(Prime Minister Benjamin Netanyahu celebrates in Hadera)

(President Reuven Rivlin celebrates in Ashkelon)Nagy said he has been stationed in Israel for three years but had never attended a Mimouna event before. He said he enjoyed Zagouri’s moufletas, calling them “very sweet and tasty and similar to a Hungarian pancake.”“We diplomats live in bubbles sometimes, and it’s nice when we get invited to such events,” he said. “I also wanted to give respect to the Moroccan Jewish people.”Hazan said another goal of taking the diplomats to the home of a Likud central committee member was to correct its corrupt image.“I wanted to show a different face of the Likud central committee members, who are public servants who care about helping people,” Hazan said.Prime Minister Benjamin Netanyahu attended a Mimouna event hosted by the Levy family in Hadera on Monday night and will be participating in Mimouna celebrations in Dimona on Tuesday afternoon.Opposition leader Isaac Herzog (Zionist Union) attended Mimouna celebrations on Monday night in Beit Shemesh, Modi’in, Holon and Jaffa.“I came to celebrate Mimouna with my brothers and sisters without flattery or patronizing,” Herzog said in Beit Shemesh. “We are one nation, all the tribes of Israel, with one land and one country, one faith and one prayer, the same worries and the same fate. Mimouna unites our people.”
(Finance Minister Moshe Kahlon celebrates the Mimouna in Bet- Shemesh)
(Former Education Minister Gideon Sa'ar celebrates in Ashkelonn)