According to the poll, a faction led by Kahlon-Ya'alon-Sa'ar would win 25 Knesset seats while the ruling Likud would muster 21 seats. 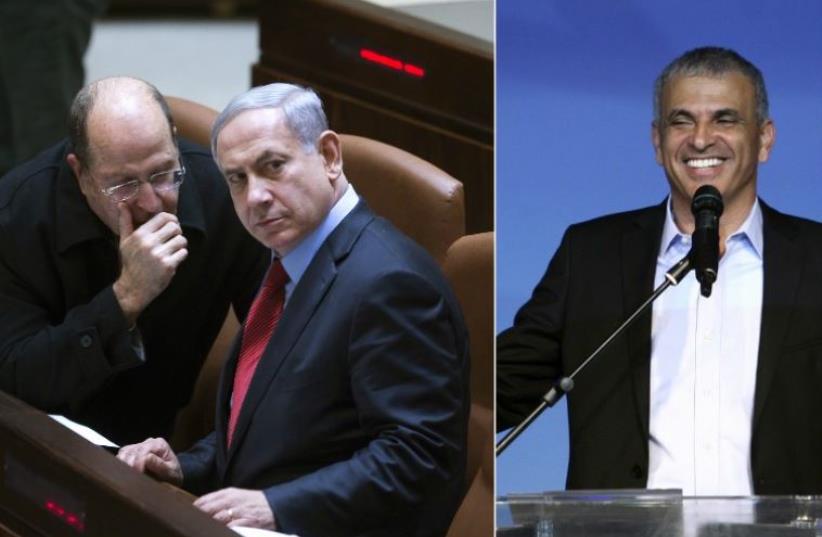 From right: Finance Minister Moshe Kahlon, Prime Minister Benjamin Netanyahu, and Moshe Ya'alon
(photo credit: REUTERS)
Advertisement
A poll commissioned by Israel Radio on Friday shows that a political party headed by the triumvirate of Finance Minister Moshe Kahlon, former interior minister Gideon Sa'ar, and former defense minister Moshe Ya'alon would win a plurality of seats in parliament.According to the poll, a faction led by Kahlon-Ya'alon-Sa'ar would win 25 Knesset seats while the ruling Likud would muster 21 seats.Zionist Union would drop to 11 seats while both Yesh Atid and the Jewish-Arab Joint List would each earn 13 seats. The religious-Zionist Bayit Yehudi would win 10 seats.Earlier this year, a poll showed that the Israeli public would prefer Sa’ar lead a new centrist party if one is formed ahead of the next election.The Panels Research survey, which was taken for the Knesset Channel, was conducted following a Haaretz survey by a different pollster, which found that a party that included Sa’ar, Kahlon and former IDF chief of staff Gabi Ashkenazi could beat the Likud led by Netanyahu.The troika of Ya'alon, Sa'ar, and Kahlon is an intriguing one since all three of them had previously held senior positions in the Likud under Netanyahu's reign. Kahlon left the Likud prior to the 2014 elections and formed his own party, Kulanu. Sa'ar took a respite from politics and is rumored to be angling his way back in order to challenge for the premiership.Ya'alon was unceremoniously removed from his position as defense minister by Netanyahu in order to make room for Avigdor Liberman of the rightist Yisrael Beytenu party.If the elections were held today with the same figures in place, the Likud would repeat as the strongest party by capturing 28 seats, according to the poll. Yair Lapid's Yesh Atid movement would become the second largest party in parliament, winning 19 seats. Zionist Union would shrink to 15 seats while the Jewish-Arab Joint List inches up to 14 seats (from its current count of 13).