The Panels Research poll found that if elections would be held today, the Likud would win 27 Knesset seats, down from its current 30. 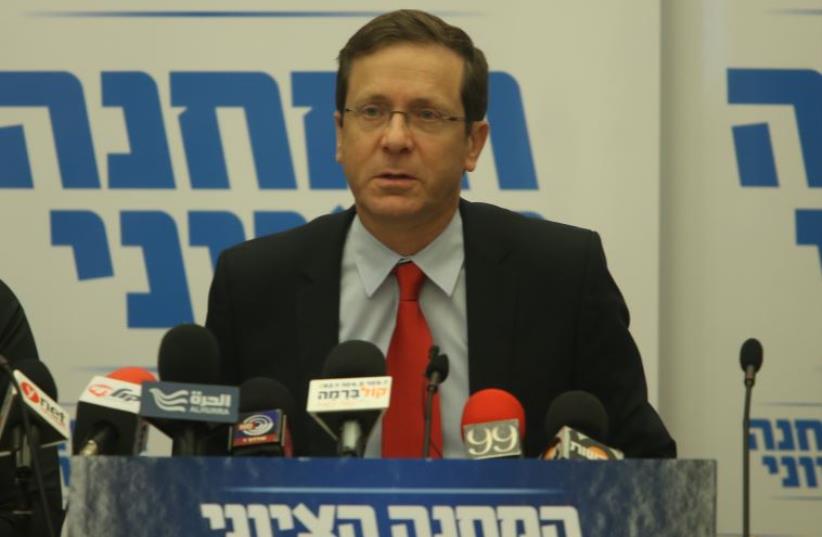 Isaac Herzog
(photo credit: MARC ISRAEL SELLEM/THE JERUSALEM POST)
Advertisement
Support for the Zionist Union has fallen since before chairman Isaac Herzog announced his plan for separating from the Palestinians and shifted the party to the Center, according to a poll taken Wednesday and Thursday for The Jerusalem Post and its Hebrew sister publication Maariv Sof Hashavua.The Panels Research poll found that if elections would be held today, the Likud would win 27 Knesset seats, down from its current 30.Yesh Atid would rise from 11 mandates to 18, and the Zionist Union would fall to 15 seats from its current 24.Bayit Yehudi and the Joint List would each win 12 seats, Yisrael Beytenu 10, United Torah Judaism and Shas seven each, and Meretz and Kulanu six each.There were hopes in the Zionist Union that Herzog’s controversial plan would help woo centrist voters from the Likud and Yesh Atid. But a Panels poll taken a week before Herzog announced the plan on January 19 found that the Zionist Union would win 16 seats, one more than the current poll.“We are crashing because of the lack of leadership and our lack of consistency,” a source close to Herzog’s party rival, MK Shelly Yacimovich, said in response to the poll.The poll of 507 respondents representing a sample of the Israeli adult population asked about the Jerusalem Labor Court’s ruling last week that Prime Minister Benjamin Netanyahu’s wife, Sara, abused employees at their residence. The court ordered the state to pay former house manager at the residence Meni Naftali NIS 170,000 for poor treatment and the failure to pay him for overtime hours.When asked whether they believe reports about Sara Netanyahu’s problematic behavior, 62 percent said yes, 20% said they did not know, and 18% said no.Asked whether such behavior could harm the prime minister’s ability to do his job, 66% said yes, 23% no, and 11% did not know.Half the respondents said Sara Netanyahu’s behavior did not harm their opinion of her husband, 44% said it did, and 6% did not know.Among Likud voters, only 19% said it harmed their opinion of the prime minister.Forty-six percent said they did believe the reports about Sara Netanyahu, compared to 33% who do believe the reports, and 21% said they did not know.The poll had a margin of error of ±4.3 percentage points.