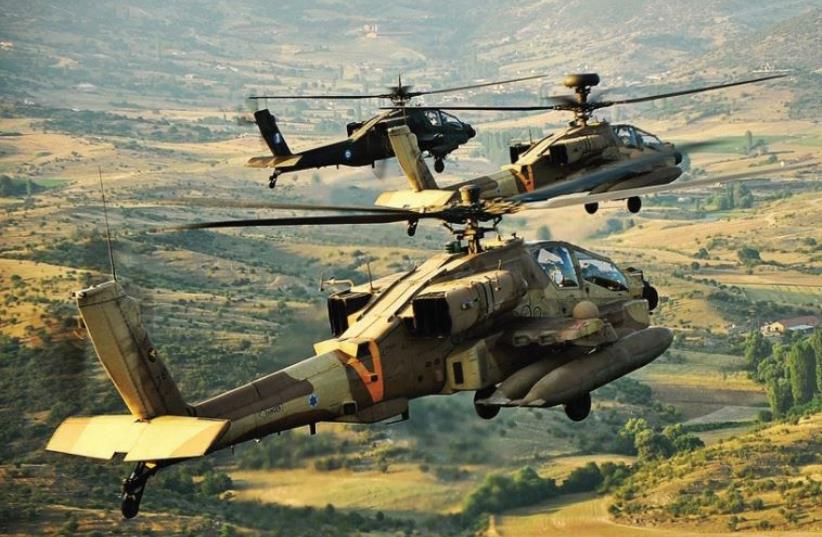 An Israel Air Force Apache helicopter lands across from a Greek mountain range during a joint Israel-Greece exercise with the Hellenic Air Force in October 2011
(photo credit: IAF)
Advertisement
The preliminary findings of the investigation into a deadly Apache helicopter crash have indicated that there was no connection between the crash and the reason behind the grounding of the entire fleet earlier this summer.A senior officer in the Air Force familiar with the investigation said on Tuesday that “we can say for certain that it is not related to the issue of what happened in June,” adding that the pilots alerted the tower that there was a malfunction in the steering system of the tail rotor blades.In June, IAF chief Major General Amir Eshel grounded the entire fleet of Apache helicopters after a technician found a crack in the blade of one of the helicopters during a routine maintenance check. Eshel had called for an investigation into what exactly had caused the damage to the blade. The Apache fleet began to return to operational service in July after the investigation was completed. According to IDF Spokesperson Brig. Gen. Ronen Manelis, the Apache that crashed on Monday night was part of that gradual process.The senior officer on Tuesday stated that the helicopter that crashed had been checked by the IAF and had its blades switched as part of the investigation.“I can say that, from what we have seen at the crash site, if it was related to the rear rotor blades, then they would not be intact like they were,” he said.“In the kind of emergency that they alerted the tower about, it is imperative that the pilots return to base for landing,” the senior officer said, adding that something went wrong during the emergency landing itself. According to the senior officer, there has not been a malfunction with an Apache leading to this type of crash in years.The crash, which killed Maj.(res) David (Dudi) Zohar, a father of five, left the co-pilot, a lieutenant in active service, critically injured. He was evacuated to a hospital in Beersheba, and then to Saroka hospital, where he underwent surgery overnight and remains in serious condition.
Maj(res) David (Dudi) Zohar
Speaking to reporters on Tuesday, Zohar’s brother Shaul said that he “was larger than life.”"You will not find a better person than him, he raised a wonderful family with four wonderful children. He was a wonderful father, a wonderful brother and a wonderful son, the most wonderful person I ever met,” he was quoted by Walla news as saying.“Dudi was a pilot in the reserves. He continued his reserve service despite his age because he loved the profession and he loved the men in his squadron. We heard about last night’s crash from a loud knock on the door. It’s still hard for us to believe, it’s hard to grasp, but all the people of Israel are behind us,” he said.While the name of the wounded pilot has not been released, he had been identified as being the nephew of Tomer Gutterman, a deputy squadron commander who was killed in a March 2003 accident when his plane crashed shortly after takeoff. Gutterman was also the good friend of Zohar. The two were drafted together and were described by friends as inseparable. After Gutterman’s death, Zohar named his son after him.The investigation into the crash is headed by Colonel A., the instructor of the Air Force School of Command and former commander of a helicopter squadron. Representatives from the Apache's American manufacturer, Boeing, are also expected to join the investigation into the cause of the crash.According to IDF Spokesperson Brig.-Gen. Ronen Manelis, at around 9 p.m., an A-model Apache helicopter from the Magic Touch Squadron was returning from a training exercise when it alerted the tower at Ramon Airbase that it was experiencing a technical malfunction.The Apache was on its final approach to land when it came down inside the base, Manelis said, adding that there were only moments between the pilots alerting the tower and when it crashed between the two runways in the base.