President Reubin Rivlin repeatedly raised the issue of UN support for Israel as he accepted the credentials of four new ambassadors to Israel. 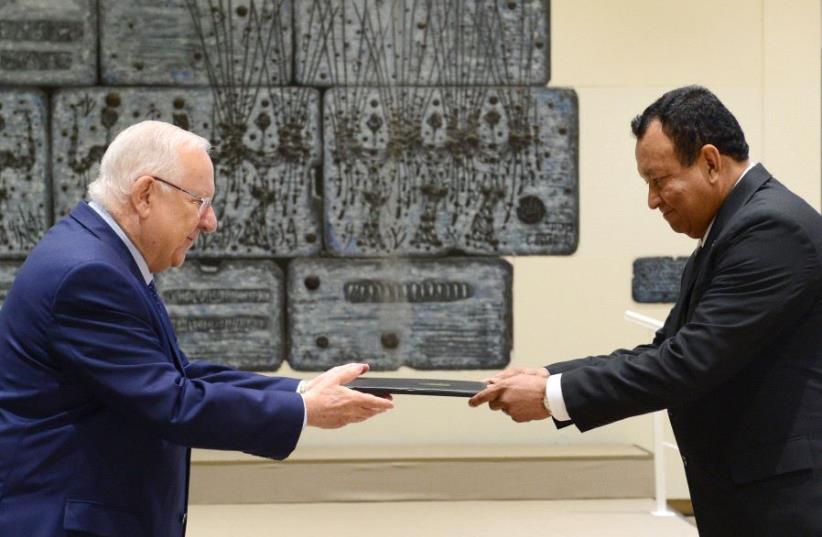 President Reuven Rivlin accepts the credentials of Honduras' new ambassador to Israel, June 15 2017.
(photo credit: MARK NEYMAN/GPO)
Advertisement
The importance for Israel of votes at the United Nations was paramount in conversations President Reuven Rivlin held with four new ambassadors who presented their credentials at the President’s Residence on Thursday.Rivlin raised the issue with each one separately telling Niranjan Kumar Thapa that while Israel warmly appreciates the support it receives from Nepal at the UN, “you could do better”. He was referring specifically to the UNESCO resolution that negates the Jewish connection to Jerusalem and the Temple Mount. Nepal was among the countries that abstained. “I believe that everyone in Nepal knows that Jerusalem is the capital of Israel,” Rivlin declared scathingly.But he softened the blow by talking in glowing terms about Nepal’s beauty which is a magnet for young Israeli hikers including his own children.Thapa thanked Rivlin for the help that Israel had given to Nepal in the aftermath of the April 2015 earthquake, sending in rescue and medical teams. 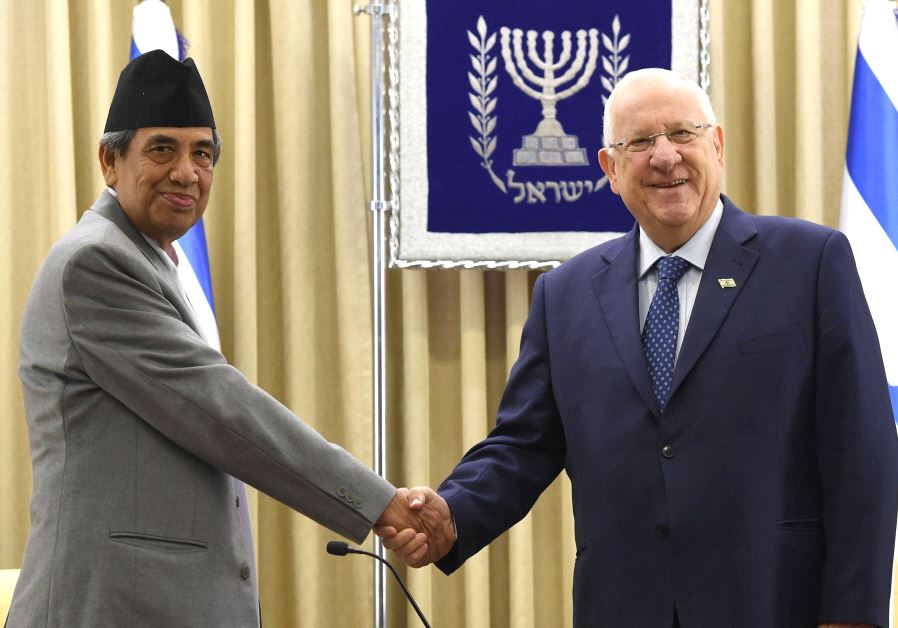 President Reuven Rivlin accepts the credentials of Nepal's new ambassador to Israel, June 15 2017. (MARK NEYMAN/GPO)
Mario Edgardo Castillo Mendoza, a former army general with an impressive record, who is the new ambassador of Honduras, fared somewhat better due to the strong ties between his country and Israel. Rivlin was very pleased to see him and particularly pleased to be able to convey regards to President Juan Orlando Hernandez, who in recent years has twice visited Israel and is a graduate of the Mashav training programs run by Israel’s Agency for International Development Cooperation.He had met several foreign ministers who were graduates of the program, said Rivlin, but as far as he knew, Hernandez was the only head of state. There was no criticism of Honduras by Rivlin, who told Mendoza that Honduras and its president always stand with Israel. The ambassador in turn conveyed Hernandez’s invitation for Rivlin to pay an official visit to Honduras.Although relations with Brazil are somewhat troubling at the moment, Rivlin gladly welcomed Brazilian Ambassador Paulo Cesar Meira de Vasconcellos, telling him that in November 1947, when he was a boy of nine, he clearly remembered the voice of Osvaldo Aranha, who headed the Brazilian delegation to the UN, lobbied for the partition-of-Palestine vote and as president of the General Assembly when votes were cast, announced how each country had voted. Rivlin said that everyone listened to the radio because there was no television at that time, and he could still hear that voice. 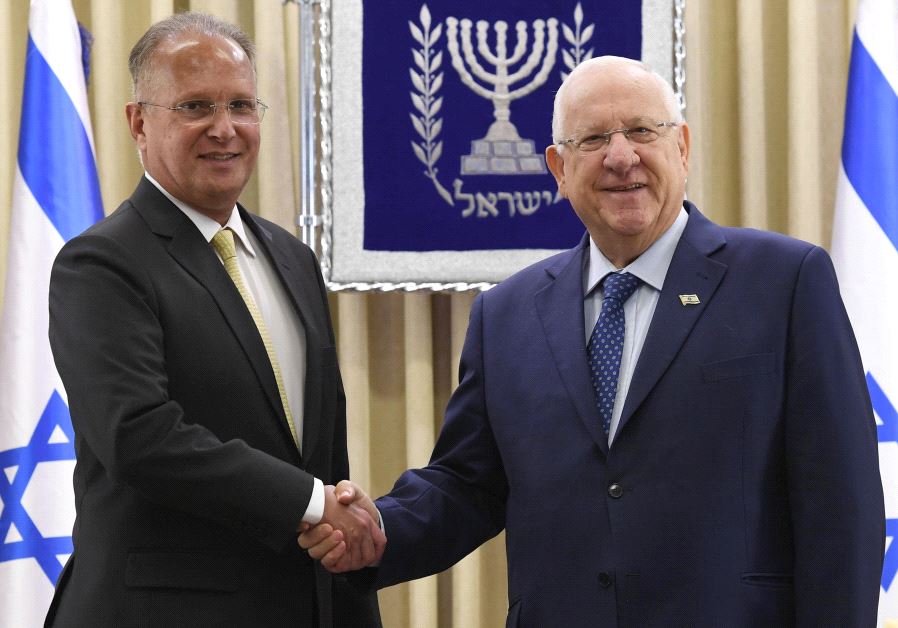 President Reuven Rivlin accepts the credentials of Brazil's new ambassador to Israel, June 15 2017. (MARK NEYMAN/GPO)
Referencing the fact that the first synagogue in the New World was built in Brazil, and that the Jewish community is influential and has the ear of President Michel Temer, Rivlin was certain that everyone in Brazil also knows that Jerusalem is the capital of Israel. Describing the UNESCO resolution as “ridiculous,” Rivlin asked Meira de Vasconcellos to request the Brazilian administration to reconsider its vote.Other than that sensitive issue, he wanted to discuss how Israel and Brazil could join forces to provide food security for the world as both countries have considerable expertise in this field. Rivlin was also aware that the ambassador has considerable experience in and knowledge of the Middle East, and suggested that this might be helpful to confidence building between Israel and the Palestinians.It was impossible for Rivlin, the football addict to conduct a conversation with a representative of Brazil without mentioning his favorite sport.“I’ve read about the team of which you were manager,” said Meira de Vasconcellos.“We have the same colors,” retorted Rivlin dryly.Acknowledging that from time to time there would be “turbulence” in the relationship between Israel and Brazil, Meira de Vasconcellos suggested that Israel should strengthen its constituency in his country.In greeting Job Daudi Masima, the last of the four ambassadors, Rivlin exclaimed: “We are making history.” Masima is the ambassador of Tanzania, which severed relations with Israel in 1973 after the Yom Kippur War. Masima who is currently nonresident, is in Israel to begin the process of establishing an embassy, He came with his wife, his son and his four daughters. 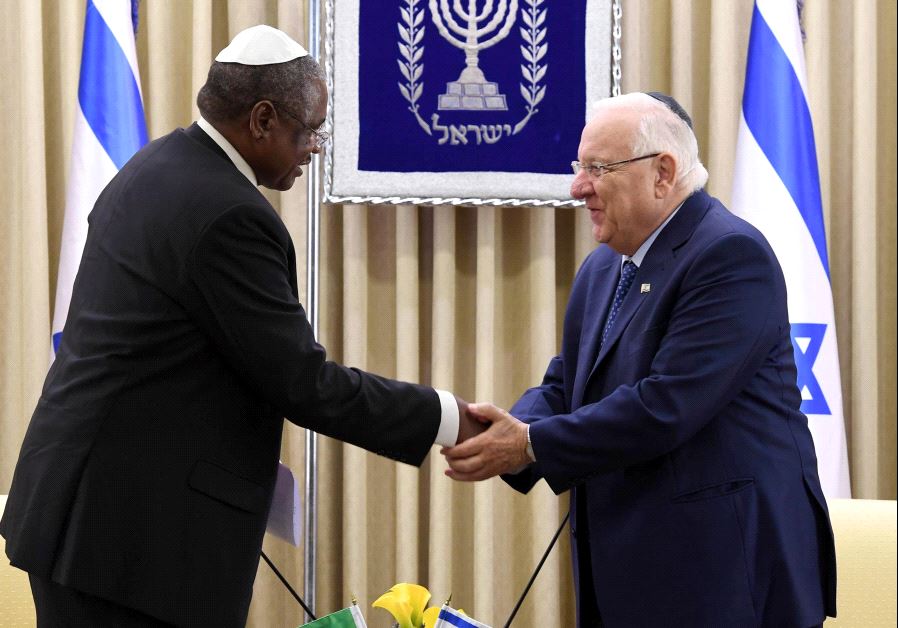 President Reuven Rivlin accepts the credentials of Tanzania's new ambassador to Israel, June 15 2017. (MARK NEYMAN/GPO)
When Prime Minister Benjamin Netanyahu was in Africa in July, 2016, he was informed that Tanzania would for the first time open an embassy in Israel. That promise is now becoming a reality. Masima, a Muslim, surprised Rivlin when he stood up, put his hand in his pocket and withdrew a cream satin skullcap which he put on his head and proceeded to recite in Hebrew the sheheheyanu prayer of thanks for reaching this day. Rivlin put his hand in his own pocket and took out a black kippa to cover his head. After completing the verse, Masima assured Rivlin of the solidarity with Israel of the government and people of Tanzania.