Agriculture Minister Uri Ariel said that the wave of terror against "Jews who are only guilty of being Jewish" is growing. 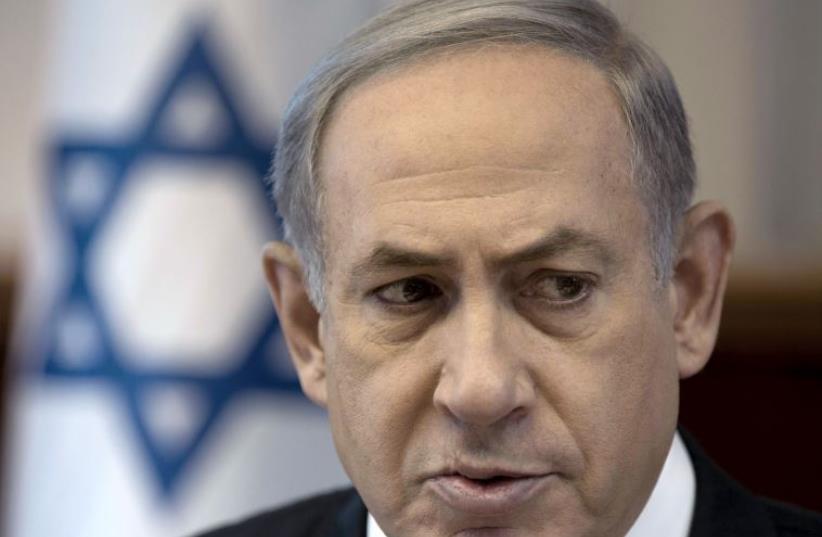 Prime Minister Benjamin Netanyahu attends the weekly cabinet meeting at his office in Jerusalem
(photo credit: REUTERS)
Advertisement
Israel's political establishment reacted to Saturday night's stabbing attack by a Palestinian in Jerusalem's Old City, with calls for Prime Minister Benjamin Netanyahu to react decisively.The attack on Saturday resulted in the death of two Jews and the wounding of three others. It came just two days after two Israelis were shot and killed while driving through the northern West Bank, near the settlement of Itamar. On Friday, Justice Minister Ayelet Shaked, a member of the security cabinet, said the government is not doing enough to fight terrorism. "It's true that this is a nationalist, right-wing, homogeneous government, but there are some problems. For example, the commanders in the field don't have enough backing...The soldiers have to know that they're there to fight and protect the citizens," she told Channel 2 News. Shaked added that Prime Minister Netanyahu believes in two states and Bayit Yehudi considers that a mistake, and that annexation of Area C must be on the table. "We need to do things that will hurt [the Palestinians], so they understand [terrorism] doesn't pay," she added, saying that PA President Mahmoud Abbas is directly responsible for the recent wave of terrorism.On Saturday night, Economy Minister Arye Deri called to support the IDF and security forces in their fight against terrorism and said ministers should not attack Netanyahu while he's still abroad, because such behavior is "outrageous and intolerable."Deri added that Arab MKs are fanning the flames and cynically using the situation to agitate. Agriculture Minister Uri Ariel said that the wave of terror against "Jews who are only guilty of being Jewish" is growing."We saw in recent weeks how violence in the streets of Jerusalem is increasing and the writing was on the wall. This was the direct result of continued incitement by the Palestinian Authority...I call on the prime minister to act with an iron fist against terror, and with his second hand, give an appropriate Zionist response and stop the settlement free in Judea and Samaria," he stated.Opposition leader Isaac Herzog (Zionist Union) said "Netanyahu lost control over the security of Israeli citizens and Jerusalem. His government is showing weakness and a total failure in security and the national mission of protecting Jerusalem's security."Security does not come from speeches, Herzog added."This government doesn't have a plan to fight terrorism, and that's clear to all Israeli citizens," he said. "The despicable terrorists must be punished to the full extent of the law but the government must have a policy and take action, not just talk and declarations and weak slogans."Yisrael Beytenu chairman MK Avigdor Liberman wrote on Facebook: "This is what losing control and deterrence looks like."MK Eyal Ben-Reuven (Zionist Union) said the deteriorating security situation is beginning to look like an Intifada."Security forces must act forcefully to stop the wave, but we must act forcefully with good judgment to make sure it doesn't cause an escalation," he added.Ben-Reuven also said that only a diplomatic initiative can bring a long-term solution.Jerusalem Mayor Nir Barkat called for the arrest of those guilty of "incitement," which he blamed for the Palestinian stabbing attack that left two Israelis dead and three others wounded in the Old City on Saturday.Barkat said that the government needed to take "drastic" measures, though he would not specify the nature of those measures.The mayor said that the Palestinian Authority was responsible for inciting "lone wolf" attackers by failing to condemn other terrorist atrocities like Thursday's fatal shooting of a Jewish couple near the West Bank settlement of Itamar.