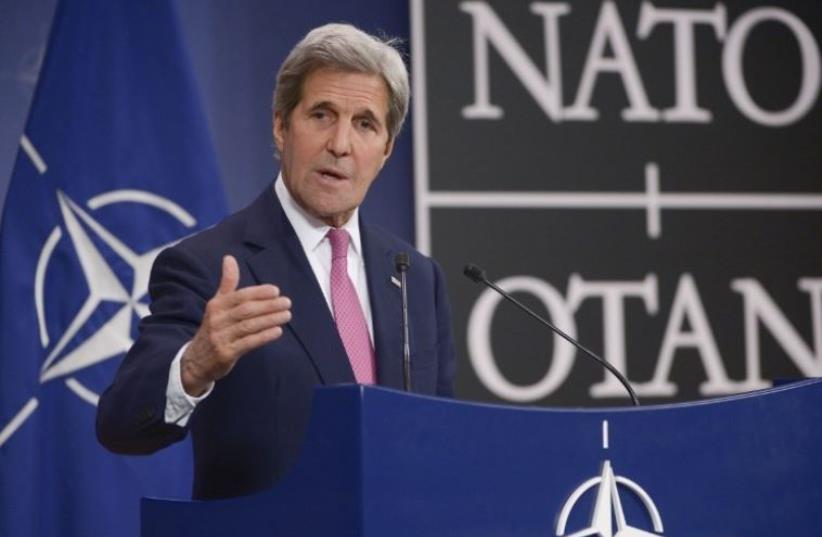 US Secretary of State John Kerry speaks to the press at NATO headquarters in Brussels
(photo credit: AFP PHOTO)
Advertisement
The long-awaited Quartet report on the Middle East is expected to include a recommendation that Israel and the Palestinians begin bilateral negotiations, The Jerusalem Post has learned.If so, the report would endorse Jerusalem’s longstanding position that only direct talks can succeed, rather than the French call for an international conference.Both the Quartet report and the French initiative are expected to be high on the agenda of talks Prime Minister Benjamin Netanyahu is scheduled to hold in Rome Sunday evening and Monday with US Secretary of State John Kerry.The meetings will take place in the shadow of Britain’s historic vote on Thursday to leave the EU. Netanyahu is not expected to meet with EU foreign policy chief Federica Mogherini, though a meeting with Italian Prime Minister Matteo Renzi is scheduled.The EU, along with the US, Russia and UN, make up the Quartet. It is expected, in the coming days, to issue a report that has been months-in-themaking, spelling out what it sees as the reason for the current diplomatic logjam and recommending how to break it.One of these recommendations is expected to be a return to bilateral negotiations.Though such a recommendation sounds almost banal, it stands in contrast to the French approach, which is that, since the negotiations have little chance of success, the international community needs to get more actively involved through an international peace conference.Netanyahu adamantly opposes that approach.US special Middle East envoy Frank Lowenstein took the lead in writing the Quartet report, which is expected to criticize Israel for settlement construction and its policies in Area C, and also take the Palestinians to task for incitement and violence.When speaking of the report in Brussels last week, Mogherini said it would make “some substantial recommendations to the parties on how to overcome the trends that are making the perspective of the two states fading away.”Upon Netanyahu’s return to Israel, he is to meet with UN Secretary- General Ban Ki-moon, who arrives Monday for a two day visit that includes a trip to the Palestinian territories to meet with Palestinian Authority President Mahmoud Abbas.In the last three weeks, Israel has held high-level meetings with all members of the Quartet.In most cases, the quartet also held simultaneous meetings with Palestinian leaders similar to Ban’s scheduled plan to speak with Netanyahu and Abbas within one day of each other.On June 7, Netanyahu met with Russian President Vladimir Putin in the Kremlin and the two also held a phone conversation last week. On June 8, Palestinian Authority Foreign Minister Riyad Malki met in Moscow with his Russian counterpart, Sergei Lavrov.In Brussels last week, Mogherini met with Abbas on Wednesday and with President Reuven Rivlin on Thursday. Both Rivlin and Abbas also addressed the European Parliament during their visits.Abbas, however, rejected an initiative by European Parliament head Martin Schulz to meet with Rivlin. This has not dampened speculation that the flurry of diplomatic activity could indicate some new push for the resumption of negotiations, which have been frozen since April 2014.Netanyahu, in particular, has spoken of the possibility of a regional process to resolve the Israeli-Palestinian based on the revised 2002 Arab Peace Initiative. That plan, also known as the Saudi Initiative, offers Israel normalized ties with the Arab world in exchange for its withdrawal to the pre-1967 lines.Mogherini last week told reporters the EU is also interested in a regional process that involves the Arab peace plan.In Washington on Friday, State Department spokesman John Kirby, however, tried to tone down expectations for the Netanyahu-Kerry meetings.He told reporters that Kerry does not plan to use the meeting to push forward new ideas on the Israeli- Palestinian track.“He will not be trying to restart peace talks between the Israelis and Palestinians or offering any new initiatives,” Kirby said.“Obviously, as a part of this broader discussion that the secretary will be having with the prime minister, they’ll talk about where things stand with respect to movement to or away from a two-state solution. Clearly that’s going to be on the secretary’s mind, as well,” Kirby said.The spokesman added that the two would be talking about larger regional issues, such as Islamic State and Syria.