Before the meeting on Thursday, Ambassador to the UN Danny Danon called on the Security Council to condemn the murder of 13-year-old Hallel Ariel, killed by a Palestinian terrorist. 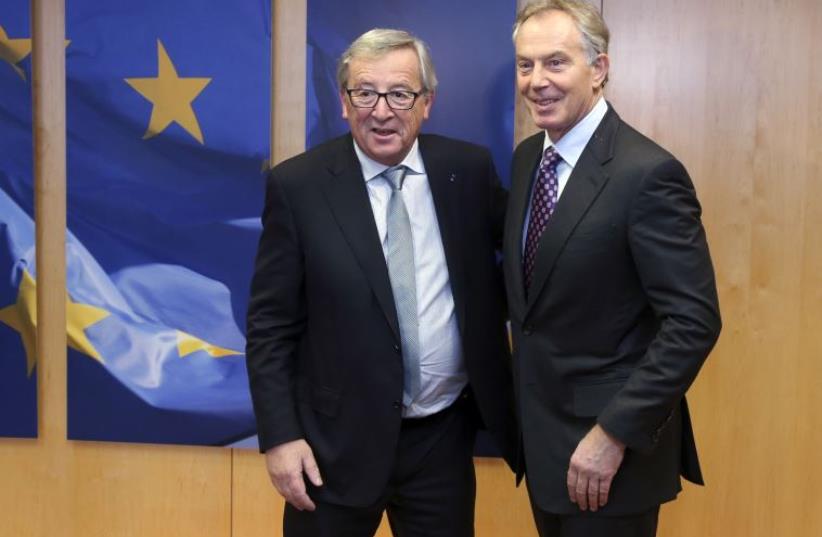 European Commission President Jean-Claude Juncker poses with Quartet Representative to the Middle East and former British Prime Minister Tony Blair (R)
(photo credit: REUTERS)
Advertisement
NEW YORK – The Middle East Quartet’s report, expected to be published on Friday morning, will focus on the major threats to achieving negotiated Israeli-Palestinian peace, and offer recommendations on the way forward, according to UN Special Coordinator for the Middle East Peace Process Nikolay Mladenov.Mladenov briefed the UN Security Council at its monthly meeting about the situation in the Middle East on Thursday and explained that three major threats to a two state solution are emphasized in the document: continuing violence, terrorism and the incitement that fuels them; Israel’s policy of settlement expansion in the West Bank; and the lack of control of Gaza by the Palestinian Authority.“These negative trends can and must be urgently reversed,” Mladenov told the council, presided by France.According to him, in the report, the Quartet calls on Israel to “implement positive and significant policy shifts, particularly in Area C of the West Bank, consistent with the idea of transitioning to greater Palestinian civilian authority as contemplated by prior agreements.”“Progress in housing, water, energy, agriculture and natural resources can be made while respecting Israel’s legitimate security need,” he said.“There is an urgent need for both sides to comply with basic commitments under existing agreement.”Mladenov told the security council that the “environment of fear” in the region is not sustainable and that “Palestinian frustration cannot be wished away.”“It cannot be vanquished by aggressive security measures, arrests and punitive home demolitions, neither has it helped when Israeli ministers openly reject the very notion of a Palestinian state or call for the complete annexation of Area C,” he added. “But neither will the violence and terrorism fueled by resentment bring about a Palestinian state.”Mladenov also pointed fingers at Palestinian incitement and said that “a peaceful future for both people cannot emerge on the back of statements that glorify terror and justify killing.” and that “mutual respect cannot come as a result of stabbings, shootings and car-rammings.”Before the meeting on Thursday, Ambassador to the UN Danny Danon called on the Security Council to condemn the murder of 13-year-old Hallel Ariel, killed by a Palestinian terrorist in the settlement of Kiryat Arba that morning, which Nikolay Mladenov also mentioned in his address.“There is a direct line between Mahmoud Abbas’s words of incitement in the European Parliament to the ghastly murder of Hallel Ariel,” Danon said. “I call on the Security Council to condemn this horrific murder and to put an end to the rampant Palestinian incitement.”Danon further called on those who applauded the Palestinian Authority president when, at the European Parliament in Brussels last week, he said Israeli rabbis had called for the poisoning of Palestinian wells, to “reflect upon their actions.”“Applause for Abu Mazen’s [Abbas’s] speech of incitement legitimizes the detestable murderers who killed Hallel while she slept in her bed,” he said.The Quartet had stated its intention to put together the upcoming report back in February, after a meeting it held in Munich.