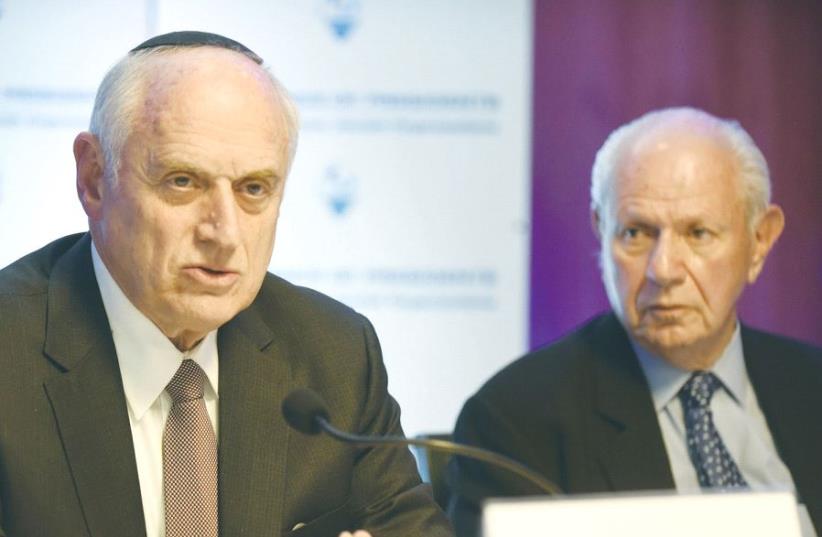 MALCOLM HOENLEIN speaks as Stephen M. Greenberg listens at a press conference before the opening of the Conference of Presidents Leadership Mission to Israel yesterday in Jerusalem
(photo credit: AVI HAYOUN)
Advertisement
Fresh off the plane after visits to Morocco and Egypt, Malcolm Hoenlein stressed the importance of fostering ties between Israel and moderate countries in the region at a press conference in Jerusalem on Sunday.Hoenlein, executive vice chairman of the Conference of Presidents of Major Jewish Organizations, had just arrived for the first day of the 43rd Conference of Presidents Leadership Mission to Israel, which is set to end on Thursday.Ahead of the conference, Conference of Presidents leaders spent a week in Morocco and made a quick stop in Cairo, where they met with Egyptian President Abdel Fattah al-Sisi – an hourand- a-half meeting Conference of Presidents Chairman Stephen M. Greenberg described as “well worth it.”Hoenlein said they spoke extensively with Sisi about his country’s relationship with Israel and of hope for a resolution to some outstanding issues, including the Israeli-Palestinian conflict, which could “pave the way for even greater exchanges.”Current issues concerning the Middle East, including the rise of Islamic terrorist groups in Gaza and Sinai, were also raised in the meeting.In Morocco, the delegation met with Prime Minister Abdelilah Benkirane and a host of other ministers and leaders in various cities. The group was served a kosher dinner at the royal palace.“For us, Morocco and Egypt serve as cornerstones for North Africa, the Mediterranean and the Middle East,” Hoenlein said.The Conference of Presidents of Major Jewish Organizations works to foster closer relations between Israel and countries in Asia, Africa and the Arab world, largely behind the scenes. Later in the week a COP delegation is also scheduled for a one-day visit to Cyprus, a relationship with which the organization has been deeply involved.Hoenlein stressed a growing interest from an increasing number of countries, and mentioned Bulgaria as an indication of “great interest in looking for ways to cooperate with Israel...that Israel has so much to offer the region and the larger region, especially now with its energy capacities which serve as even further bond.”Former Bulgarian president Rosen Plevneliev attended the opening of the conference that followed the press conference.Hoenlein said there are many other “surprising” countries which have privately expressed interest in increasing cooperation with Israel. But he indicated that such cooperation would remain behind-the-scenes until there is a progress on the Israeli- Palestinian issue.Addressing the issue of Iran – which Hoenlein told The Jerusalem Post last week he still views as the most pressing issue – he said, “We believe now is the time to put pressure on the Iranians. We see that when you confront Iran with strength, they back down, when you confront them with weakness, they exploit it.”The way forward, he said, is a united approach between moderate regimes in this region, with the US at the lead in collaboration with European and other countries. Hoenlein stressed that the goal was not to destroy the nuclear deal between Iran and world powers, but to pursue policies than enlist others and build a broader coalition.