According to Israel Radio, the incident was triggered when Judeh took to the podium to speak at a donors conference hosted by the UN. 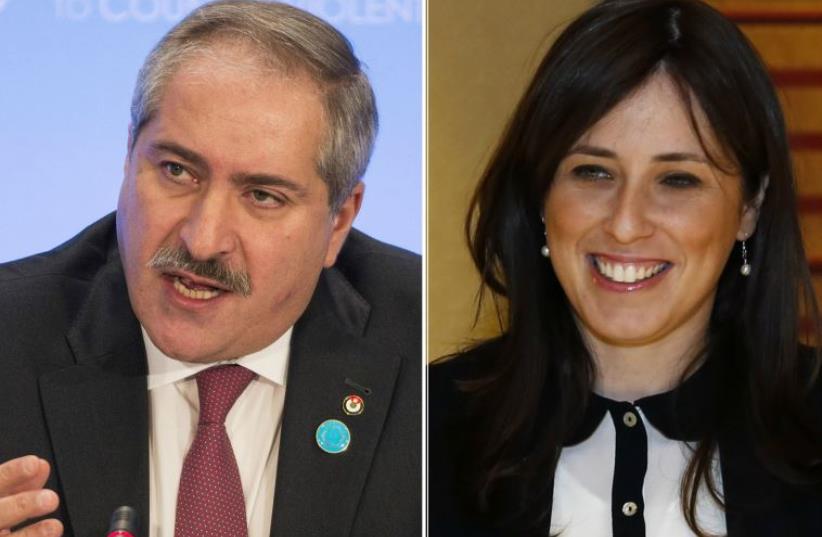 Jordanian Foreign Minister Nasser Judeh (L) and Israeli Deputy Foreign Minister Tzipi Hotovely
(photo credit: REUTERS,AFP PHOTO)
Advertisement
Deputy Foreign Minister Tzipi Hotovely reportedly engaged in a nasty spat with Jordanian Foreign Minister Nasser Judeh at United Nations headquarters in New York on Thursday.According to Israel Radio, the incident was triggered when Judeh took to the podium to speak at a donors conference for the Palestinians hosted by the UN.During his remarks, Judeh accused Israeli security forces of "defiling al-Aksa mosque with their feet."This prompted Hotovely to angrily confront the Jordanian diplomat, accusing him of "distorting history."The deputy foreign minister told Judeh that he was following in footsteps of the late Palestinian leader Yasser Arafat in denying the existence of a Jewish temple at the holy site.The Temple Mount has been a flashpoint of Arab-Israeli tensions in recent weeks after security forces clashed with Palestinian rioters near al-Aksa mosque.In his remarks to the UN General Assembly, Jordan's King Abdullah mentioned the recent tensions and violent clashes on the Temple Mount in Jerusalem, saying Jordan condemns any disturbances at Jerusalem’s Muslim and Christian holy sites.“The Hashemite custodianship of Jerusalem’s Muslim and Christian sites is a sacred duty,” he told the General Assembly.“We join Muslims and Christians everywhere in rejecting threats to the Arab character of this holy city,” he said. Relations between Jordan and Israel have soured to the point where the monarch reportedly refused to communicate directly with Prime Minister Benjamin Netanyahu, Arab and Jordanian media sources reported last week.The Kuwaiti daily A-Jarida reported that Abdullah refused Netanyahu's request to hold a secret meeting in the Red Sea resort town of Aqaba, just over the border near Eilat.According to the reports, the Hashemite monarchy is furious with the Israeli government over recent statements accusing Amman of playing a destabilizing role and turning a blind eye to Palestinian provocations on Temple Mount.The reports indicate that not only has the Jordanian government refused to accept any back-channel messages from the Prime Minister's Office, but it is also considering a recall of its ambassador to Tel Aviv as a means to express its displeasure with Jerusalem's policies as they relate to the Islamic holy sites.The Jordanian government "has changed its diplomatic tactics" in response to Israel's latest measures relating to Temple Mount, local press reports say.The king harshly criticized Israel for the decision to launch a police raid into al-Aksa mosque. "What does Netanyahu wish to achieve with these actions? Does he want to cause an explosion?" the monarch was quoted as saying."There is no partnership [with Israel] on Temple Mount, and the complex will never be divided," Abdullah said.Representatives of the United Nations Middle East Quartet expresses their “deep concern” on Wednesday over the recent violence on Temple Mount in Jerusalem.UN Secretary-General Ban Ki-moon, Russian Foreign Minister Sergey Lavrov, US Secretary of State John Kerry and European Union Representative Federica Mogherini called upon all parties to “exercise restraint, refrain from provocative actions and rhetoric, and preserve unchanged the status quo at the holy sites in both word and practice.”The Quartet members, involved in mediating the Israeli Palestinian conflict reiterated its commitment to “achieving a two-state outcome that meets Israeli security needs and Palestinian aspirations for statehood and sovereignty, ends the occupation that began in 1967, and resolves all permanent status issues in order to end the conflict.”According to the group, the global tensions in the Middle East caused by terrorism and radicalization only stress the importance of resuming the peace talks between Israel and the Palestinians.Reuters contributed to this report.