French magazine report raises the possibility that Israel tampered with the secure phones belonging to Valls during a closed-door meeting with Netanyahu. 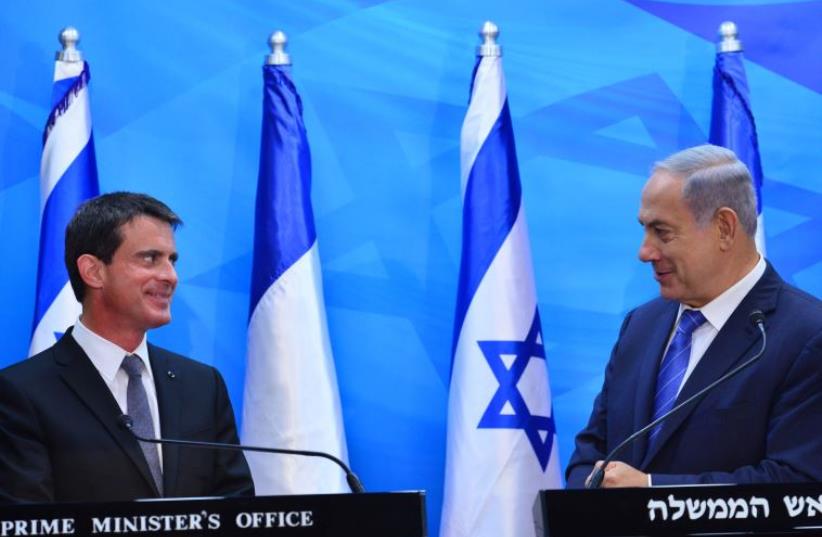 PM Netanyahu hosts French counterpart Manuel Valls
(photo credit: KOBI GIDEON/GPO)
Advertisement
When French Prime Minister Manuel Valls arrived in Israel in May he came to promote bilateral ties, which were at the time tense in light of Israel's objection to Paris's initiative to hold a conference on the Middle East peace process. While the visit was planned before the June 3 date that was set for the launch of the French initiative, Valls came to promote his country's plan. The visit included tours of "sensitive" areas and entrance to the Prime Minister's Office, where cell phones are prohibited during meetings. The French magazine L'Express raised the possibility in a report Thursday that Israel "handled " the secure phones belonging to Valls and his French diplomatic envoy while they were in a closed-door meeting with Prime Minister Benjamin Netanyahu. Upon leaving the meeting and collecting their phones, the French delegates were reportedly shocked to discover that their devices, including a laptop, showed signs of "obstruction." Back in Paris, the devices were given to the National Cybersecurity Agency of France (ANSSI) where an investigation into the incident was launched, L'Express reported. In an interview with L'Express, the French agency said it does not provide comment on targets of a potential attack. The report cited a response from the Prime Minister's Office, saying "Israel vehemently denies the incident, and considers France to be an ally, and if necessary, we will provide our information, but we do not spy on our allies."