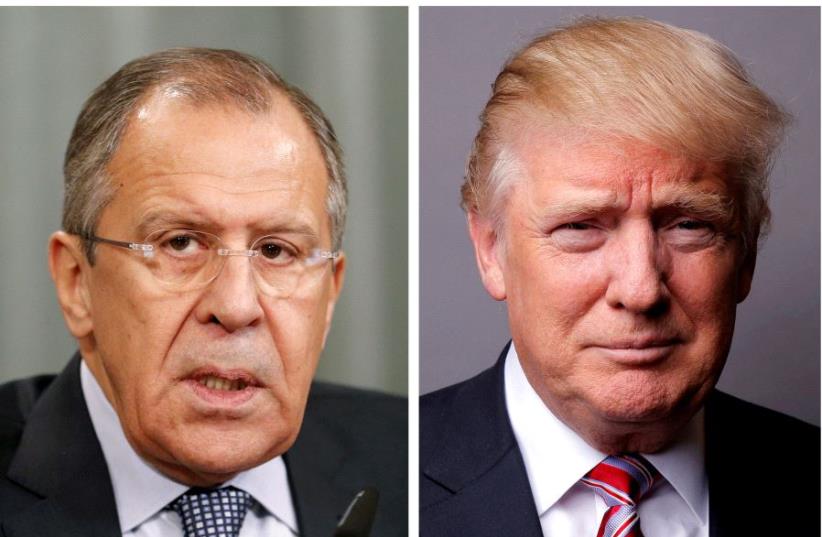 Lavrov and Trump
(photo credit: REUTERS)
Advertisement
Israeli intelligence officials shouted down their American counterparts in meetings just days before US President Donald Trump was scheduled to land in Tel Aviv, Foreign Policy reported on Friday. An American defense official in military planning allegedly told the news website that the Israeli officials were furious that Trump may have "compromised a vital source of information on the Islamic State and possibly Iran."Earlier this week, according to a New York Times report, two US officials, one current and one former, said Trump shared the intelligence supplied by Israel in the fight against Islamic State with Russian Foreign Minister Sergei Lavrov and Russian Ambassador Sergei Kislyak during an Oval Office meeting earlier this month, which the American press was barred from attending. This latest report is another piece in a puzzle of allegations. Some have argued that Trump committed no wrong-doing, with National Security Advisor H.R. McMaster calling Trump's disclosure "wholly appropriate." Value judgements aside, there has yet to be confirmation on the original source of the information, with speculation flying that it could be from Israel or from Jordan.
US officials: Trump revealed intelligence secrets to Russia (credit: REUTERS)
"To [the Israeli Officials], it's horrifying," the source told Foreign Policy. "Their first question was: 'What is going on? What is this?'" The official went on to say that while Israeli intelligence officials knew that Trump had a "limited grasp of military operations and intelligence procedures," they were surprised to see the president being careless with "one of their most sensitive accesses.""To the Isrealis," the anonymous source continued, "ISIS is not that big of a concern... We have a partner that has done us a favor. They went out of their way to support us in a campaign against ISIS, that they have no real skin in."The official also commented on the abundance of media coverage despite little comment from either government: "There's been no collaboration on this issue or any outreach. But it's like a [public relations] crisis."There were also reports that President Trump's alleged leak could have endangered the spy embedded within ISIS who provided the original information. Foreign Policy noted that losing such a source would also harm any US-led military operations in the area. "Sources aren't infinite," the official said. "They are already reassessing: 'Where are we going to be able to gain that kind of information?'"The controversy comes ahead of Trump's first visit to Israel, which is set to begin on Monday.