Report: US may allow new settlement in exchange for partial building freeze

Trump has prioritized making peace between Israelis and Palestinians, characterizing a comprehensive agreement between the two parties as the "deal of all deals." 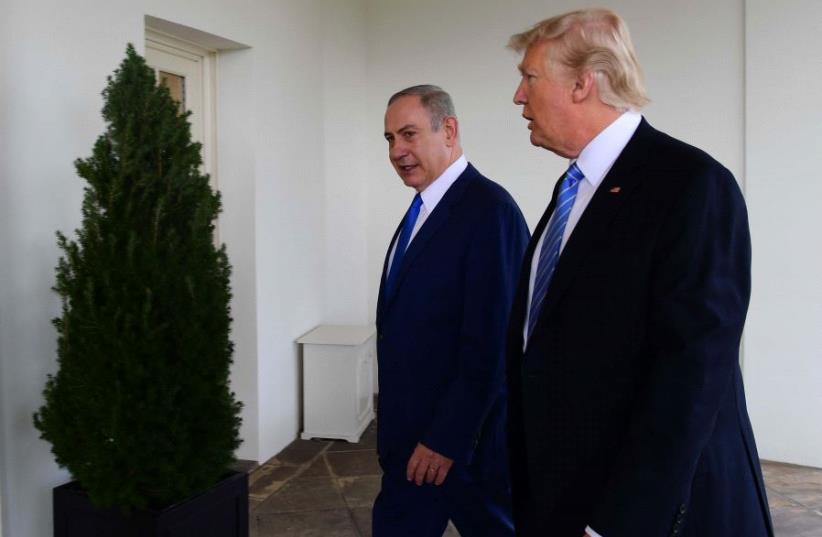 PM Netanyahu and President Trump
(photo credit: AVI OHAYON - GPO)
Advertisement
Prime Minister Benjamin Netanyahu will be able to fulfill his pledge and build a new settlement for Amona evacuees, but then restrain settlement construction elsewhere and focus on construction in the large settlement blocs according to terms of an agreement being hammered out with Washington, Channel 2 reported Saturday.According to the report, the Trump Administration will also give Israel a green light to find a solution for other outposts – like Amona –where there are legal questions regarding land ownership. Channel 2 said that this agreement still needs the approval of both sides.A spokesman in the Prime Minister's Office said that the report “was incorrect,” but the PMO has not given any details itself about the contours of the agreement under discussion. The report comes following two weeks of high-level talks between Israeli and US officials looking for a formula that would be acceptable to both sides and would govern future building beyond the Green Line. Netanyahu, during his visit to China last week, said that “significant progress was being made."Nevertheless, a week of talks in Washington ended last Thursday night with a joint statement saying only that the discussions were “serious and constructive, and they are ongoing.”Discussions about finding a formula that would govern construction over the Green Line began when Jason Greenblatt, Trump's special representative for international negotiations, came to Israel two weeks ago. The discussions continued last week in Washington, with the Israeli side represented by Netanyahu's Chief of staff Yoav Horowitz, his foreign policy advisor Jonathan Schachter, and ambassador to the UN Ron Dermer. Greenblatt was joined in Washington by State Department and National Security Council officials.According to the joint statement, “The United States delegation reiterated President Trump's concerns regarding settlement activity in the context of moving towards a peace agreement. The Israeli delegation made clear that Israel's intent going forward is to adopt a policy regarding settlement activity that takes those concerns into consideration.”Jerusalem is keen on reaching an agreement with Washington on the matter in the early days of the new administration to remove it as a constant irritant in the relationship, as it was during the Obama years.
Israeli forces begin evacuating Amona
The statement said that the focus of the “four days” of intensive talks in Washington was on “concrete, near-term measures to improve the overall climate in order to advance the prospects for a genuine and lasting peace between Israel and the Palestinians.”According to the statement, the issues under discussion “are exceptionally complicated, and the fact that both governments dedicated such senior delegations for nearly a full week of talk reflects the close cooperation between the two countries and the importance both assign to this vital task.”While most of the media attention has focused on the settlement issue in the discussions, the statement said “a principal focus” was specific measures that could be taken to have a “meaningful impact on the economic environment in the West Bank and Gaza, allowing the Palestinians to more fully realize their economic potential.”The statement also said that the two sides agreed on the importance of implementing measures benefiting the people of Gaza “in ways that benefit the population without further empowering Hamas or other terrorist organizations.”Trump has prioritized making peace between Israelis and Palestinians, characterizing a comprehensive agreement between the two parties as the "deal of all deals." He has told both parties that now is the time for negotiations.The last round of negotiations -- led by then secretary of state John Kerry -- ended in failure in 2014.Michael Wilner contributed to this report from Washington.