Reporter's Notebook: A funeral that would have meant the world to Peres

Love for Peres was clearly evident at the funeral, coming from leaders from the four corners of the earth and all sectors of Israeli society. 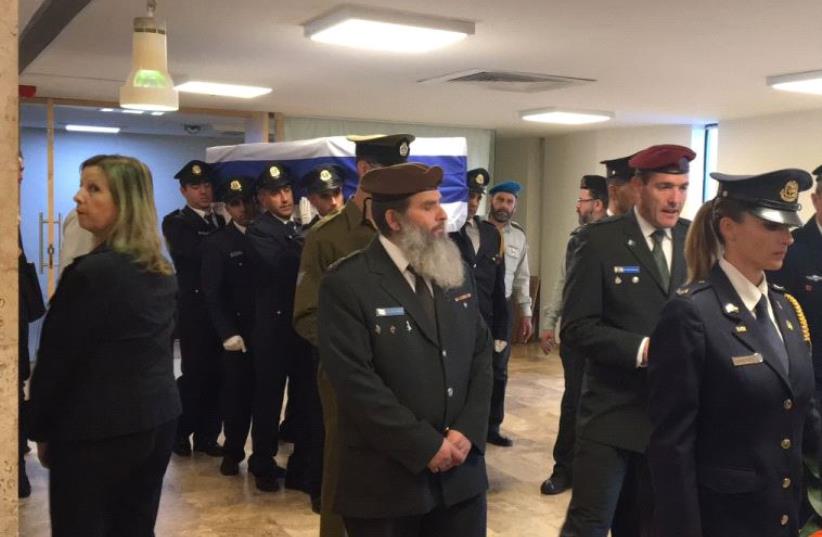 The coffin of Shimon Peres on the way to Mount Herzl from the Knesst
(photo credit: Courtesy)
Advertisement
Seeing the current and former world leaders who gathered on Mount Herzl to honor former president Shimon Peres at his funeral Friday was impressive, not only because of the quality of heads of state who came, from US President Barack Obama on down, but also the quantity.When emcee Gilad Adin welcomed each delegation from 70 countries, it felt like Jerusalem was finally hosting the Olympics we have all been waiting for. With all due respect to Obama, Prince Charles and Canadian Prime Minister Justin Trudeau, it was the African leaders in their native dress who looked the most impressive.As at the wedding of Prince William and Kate Middleton, there seemed to be a competition for nicest headgear. But, here, it wasn’t the women, but the men.Obama and former US president Bill Clinton wore standard synthetic black kippot.Charles was the most impressive, sporting a large kippa bearing the Crest of Wales, which Jonathan Arkush, president of the Board of Deputies of British Jews, said he wears at many Jewish functions.As was fitting for Peres, there was plenty of English at the funeral amid all the Hebrew. Prime Minister Benjamin Netanyahu and Peres’s son, Chemi, made a point of speaking in both languages, making it easier for the world leaders and the all-star line up of foreign journalists at the funeral, led by BBC star Lyse Doucet.Like most events in Israel, the funeral started late, as Peres’s motorcade did not arrive on time from the Knesset and security took too long scanning the enormous lines of people. But once it started, the funeral went like clockwork, with no obvious embarrassments for Israel while the world was watching.The organizers and security forces who secured the funeral had two weeks to prepare, because Peres suffered the stroke that killed him on September 14. At Ariel Sharon’s funeral, it seemed there had been too much time to prepare, since he had been in a coma for eight years.US Vice President Joe Biden’s speech at Sharon’s memorial ceremony at the Knesset was longer than Obama’s address at Peres’s. But Obama’s sounded much more sincere, as he clearly deeply respected Peres, a feeing that was evident among the leaders from around the globe and all sectors of Israeli society.Peres was privileged to hear his own praises three years ago at his 90th birthday party, when he received the love he had sought during his decades of mixed success in politics.Peres left a will that ensured all three of his children spoke at his funeral. Peres’s daughter, Tzvia Walden, made a moving impression when she uttered the Kaddish prayer at her father’s grave.She included all of humanity in the last line of the mourners’ prayer, that prays that God will bring peace to all the Jewish people. That sent a message to the world leaders that Peres may not be around anymore, but wherever he is, he is still working for world peace.