Agriculture Minister Uri Ariel responded with a thinly-veiled threat to break apart the coalition, which currently has the minimum 61 seats. 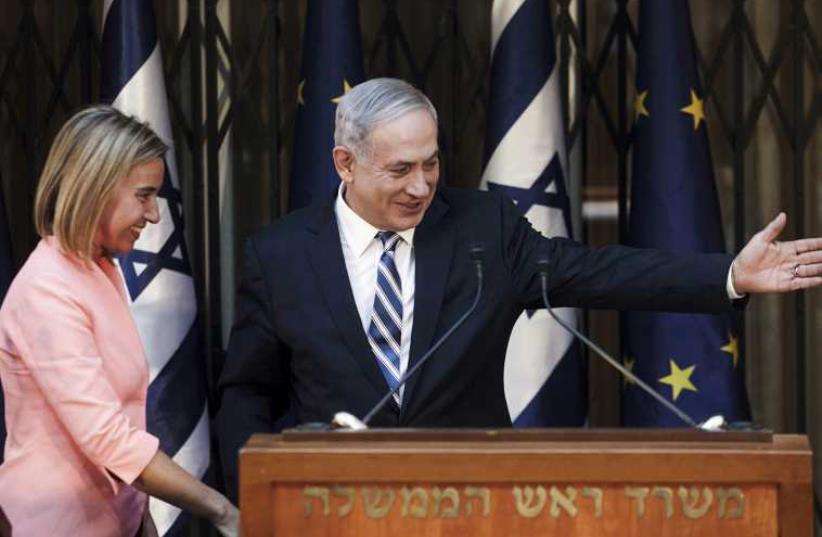 Prime Minister Benjamin Netanyahu (R) shows the way to European Union foreign policy chief Federica Mogherini
(photo credit: REUTERS)
Advertisement
Prime Minister Benjamin Netanyahu’s willingness to discuss the borders of Israeli settlement blocs in a bid to jumpstart peace negotiations with the Palestinians, if true, would constitute “a dangerous, unprecedented offer,” Agriculture Minister Uri Ariel on Tuesday.Following a media report that Netanyahu told the European Union’s Foreign Minister Federica Mogherini he was ready to discuss outlining the contours of areas in the West Bank that Israel wishes to retain in any final settlement with the Palestinians, Ariel, a minister in Bayit Yehudi, responded with a thinly-veiled threat to break apart the coalition, which currently has the minimum 61 seats."If there is truth in the report, then the proposal is a dangerous precedent that clearly defies the first article in the government's guidelines: 'The Jewish people have an indisputable right to a sovereign state in the Land of Israel, its national and historic homeland,'" Ariel stated.The Bayit Yehudi minister said he expects all components of the coalition, especially the prime minister, to follow the agreed-upon guidelines.Similarly, MK Bezalel Smotrich, of Ariel's hardline Tekuma party within the Bayit Yehudi faction, shared a link to the news story on twitter Tuesday morning, adding: "Public corruption is not just [former prime minister Ehud] Olmert, it's also promising the public one thing before an election and doing something else after it.""Everyone in this government knows that if it ever goes back to dangerous diplomatic adventures, [the government] will fall that day," Smotrich tweeted.PLO unimpressedThe Palestine Liberation Organization on Tuesday brushed aside the report.Saeb Erekat, the PLO’s top negotiator, said that Netanyahu’s stated commitment to the two-state solution is “nothing new.”“[Netanyahu’s readiness to discuss settlement bloc borders is tantamount to] a request to continue illegal settlement construction with Palestinian consent,” Erekat said. “This looks like one state and two systems rather than two sovereign and democratic states.”“If Mr. Netanyahu wants to have meaningful negotiations ending the occupation that began in 1967, he should recognize a Palestinian state on the 1967 border and honor Israel’s obligations, including a halt of settlement construction and the release of the Palestinian prisoners.”