Right-wingers: ‘We don’t need US permission to build in settlements’

The politicians had hoped that with President Donald Trump in the White House, US restrictions on building in West Bank settlements would become a thing of the past. 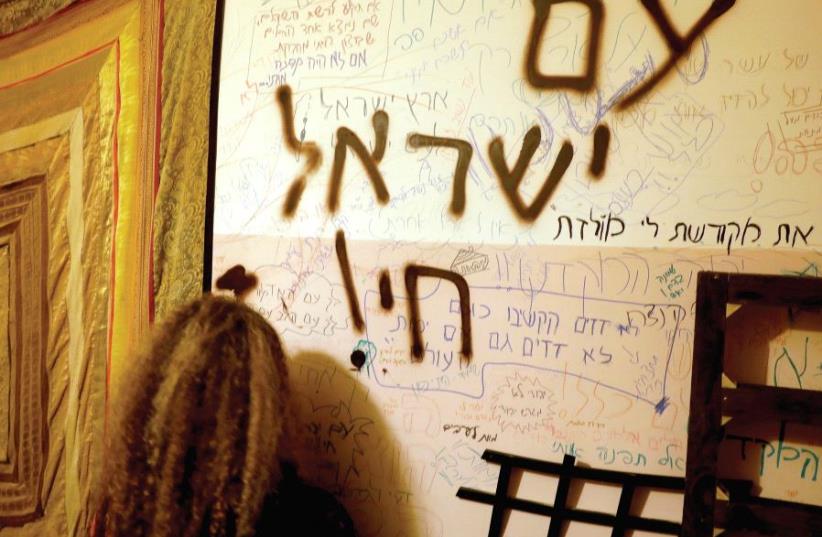 A WOMAN stands next to a wall covered in graffiti inside a home in Amona on February 1.
(photo credit: REUTERS)
Advertisement
Right-wing politicians and settlers lashed out at Prime Minister Benjamin Netanyahu on Sunday
for his plan to coordinate settlement activity with the new Trump administration.As long as settlements are only a small percentage “of the West Bank and the Palestinians are not taking steps for peace, there is no reason at all to limit the property of rights of Jews living in Judea and Samaria, or prevent their kids from building near them,” Public Security Minister Gilad Erdan said on Sunday when the issue was raised at the weekly cabinet meeting.The politicians had hoped that with President Donald Trump in the White House, US restrictions on building in West Bank settlements would become a thing of the past.
Netanyahu hails "new day" in Israel-US relations after meeting with Trump (credit: REUTERS)
Instead, in the government meeting and later in a security cabinet meeting, Netanyahu explained that a new mechanism would be set up to clarify principles for such activity.Last week, at briefing with Israeli reporters in Blair House, he had said Jewish building in Jerusalem would not be limited, but that only cautious settlement activity could continue until an understanding had been reached with the Trump administration.Ambassador to the US Ron Dermer will be among those working with the Trump Administration to clarify the issue. Neither Netanyahu nor his advisers answered questions about whether new construction could be approved until the mechanism is worked out.Among questions on the table are whether construction can occur within the built-up areas of settlements or up to the municipal boundaries, and whether such building would be solely in the blocs.Netanyahu did tell ministers that the question of whether he could approve a new settlement for the Amona residents would have to wait until after the mechanism and been approved. He added that it was possible a different housing solution would have to be found. Representatives of the 40 families who were forcibly evacuated from the Amona outpost last month rallied in front of the Prime Minister’s Office on Sunday morning, demanding he move on his promise now.Bayit Yehudi Party leader and Education Minister Naftali Bennett told Amona residents that he would press Netanyahu to keep his promise to them.