According to the prize’s organizers, approximately 900,000 people from 30 nations, 150 cities and 200 NGOs across the globe will be participating. 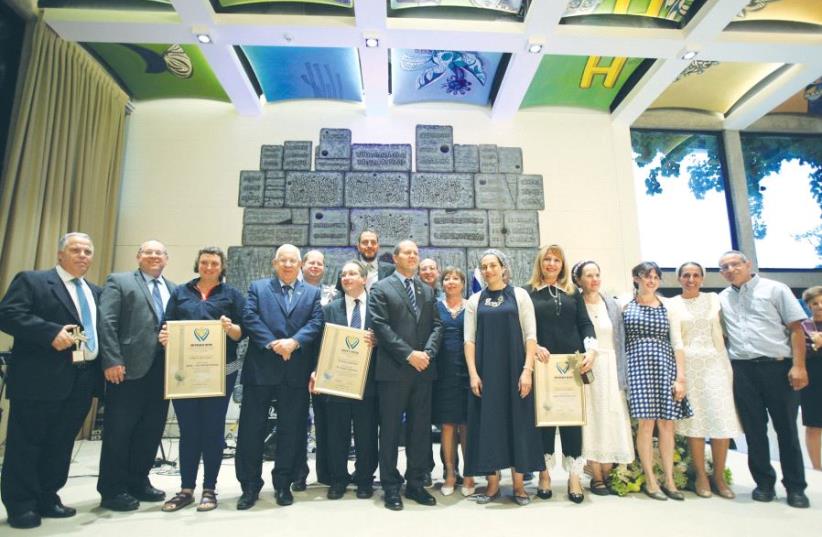 PRESIDENT REUVEN RIVLIN and Mayor Nir Barkat pose with the Jerusalem Unity Prize winners yesterday
(photo credit: EVYATAR NISSAN)
Advertisement
President Reuven Rivlin on Wednesday hosted the four winners of the third annual Jerusalem Unity Prize, honoring the memories of the three yeshiva students terrorists kidnapped and murdered near Hebron during the summer of 2014.The prize, which is presented on Global Jewish Unity Day, was conceived by Jerusalem Mayor Nir Barkat and the teenagers’ families to honor the lives and values of Eyal Yifrah, Gil-Ad Shaer and Naftali Fraenkel, whose deaths rattled the nation.According to the prize’s organizers, approximately 900,000 people from 30 nations, 150 cities and 200 NGOs across the globe will be participating in programs and events scheduled for schools, synagogues and community centers.Still, Israel remains the center of Unity Day events, with close to a million people participating in activities created by the Education Ministry via partnerships with the IDF and numerous local councils.Four awards in different categories were presented by Rivlin and Barkat at the president’s Jerusalem residence to individuals and organizations that have taken initiatives creating unity, volunteerism and understanding in Israel, and throughout the Jewish world.“During that summer of tragedy three years ago, we were repeatedly exposed to the ideals of mutual responsibility, of volunteerism, of empathy and solidarity alongside the evil and hatred which brought us into that time,” Rivlin said at the ceremony. “We must remind ourselves that unity requires constant dialogue.And while today we commemorate Unity Day, it is imperative that every day be marked by this concept.”“Through the actions of the recipients of this prize, we call upon all of society to recognize the good within us and to offer tribute to all those whose work inspires us to be a better and more united people,” he said.The global category prize was presented to Limmud, an international network of Jewish learning communities.The national prize was awarded to Tzav Pius, which “works to develop an Israeli society in which Jews of differing perceptions along the secular-Orthodox spectrum share a strong commitment to Jewish and democratic values, thus encouraging social and educational change.”The prize for the local category was presented to the first non-Jewish candidate for the award, Dr. Janaan Frajj Falah, who has worked to advance initiatives that bridge social gaps between women of diverse backgrounds in Israel’s North.And the winner of the initiative category was Kehilat Hadar, based in Haifa, which works to promote social and cultural harmony between local groups of various religions and ethnicities.“Thank you for this prize, which honors Limmud’s 4,000 volunteers, who are strengthening Jewish life and creating unity through diversity,” said Limmud chairman David Hoffman.“Limmud communities bring together people of all ages and backgrounds to celebrate all things Jewish, and creates dialogue in an inclusive, nonjudgmental atmosphere,” he added. “The Limmud model is also helping to unify Israelis.”Jan Kirschenbaum, cofounder of the Cukunft Jewish Association in Wroclaw, Poland, said global Unity Day celebrations help unite Jews from across the world.“Participating in Unity Day, coming from a small community in Poland, is very meaningful to us,” said Kirschenbaum.“Being together helps our community grow and feel unified, while being part of one big global Jewish world.”Daniel Goldman, chairman of Gesher, noted the unusual solidarity Yifrah’s, Shaer’s and Fraenkel’s murders engendered in Israel and the Diaspora.“Remembering Naftali, Eyal and Gil-Ad is to remember the enormous outpouring of unity from across the Jewish world in a moment of tragedy,” he said.“The connection with the entire Jewish Diaspora through Unity Day and the prizes not only allow us to build real partnerships, but also to discover who we truly are as Israelis and Jews,” he added.During the ceremony Rachelle Fraenkel, mother of Naftali, reflected on the nation’s cohesion during the 18 days before the abducted teens were found dead.“I don’t need the world to remember my son Naftali,” she said. “That will be the job of his family and friends.”“But,” she continued, “what I do want is for the world to remember how the global community behaved during those 18 days of uncertainty, and to always remember the power we have as a people when we choose unity over division.”