Rivlin: I was born in Jerusalem and I am Israeli

President welcomes US military chief Dempsey to "Jerusalem, the capital of the State of Israel." 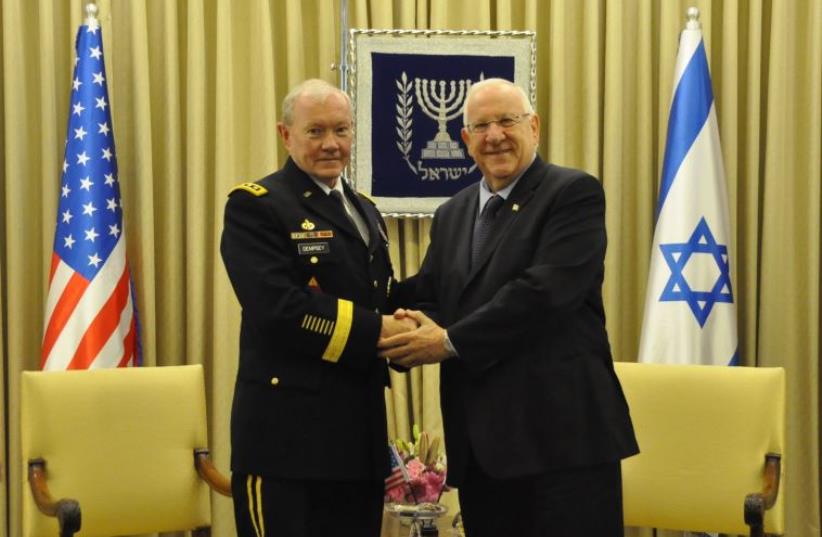 President Rivlin meet Gen. Dempsey, Chairman of the United States' Joint Chiefs of Staff
(photo credit: PRESIDENTIAL SPOKESPERSON OFFICE)
Advertisement
President Reuven Rivlin told Gen. Martin Dempsey, chairman of the US Joint Chiefs, of Staff, on Wednesday that even though he was born in Jerusalem nine years before the establishment of the State of Israel, he was born in Israel.Rivlin was alluding to the US Supreme Court decision this week according to which American citizens born in Jerusalem cannot have the word Israel in their passports.The president made a point of welcoming Dempsey to “Jerusalem, the capital of the State of Israel,” but said at the same time that Israel respected the decision of the Supreme Court because Israel respects the rule of law.Rivlin also mentioned the pressures that had been placed upon Israel by its friends over the years, including the United States, which urged Israel to enter into peace negotiations with Syria and to return the Golan Heights. However, he said it is fortunate that the Golan Heights is still part of Israel given the situation in Syria, the danger to Syria’s Druse community living near the border and the blood relations of the Syrian Druse with Israel’s Druse community. The implication was that just as America was mistaken in trying to persuade Israel to cede the Golan, it may be equally mistaken in its policy toward Iran, which according to Rivlin has imperialist ambitions.Dempsey said that he and his team were aware of the security situation and that this was one of the reasons that they were in Israel at this time to interact with their Israeli counterparts.In fact they are interacting constantly, he said, “so that we can continue addressing security challenges which face you and us.” This was their sixth visit to Israel he noted, whereas his Israeli counterparts had been to the United States eight times. He assured Rivlin that America would always be Israel’s greatest ally.When Rivlin initially greeted him, Dempsey replied “Boker tov” – Good morning in Hebrew, and said that he was glad to be back in Jerusalem. “You have a wonderful city,” he declared.