Rivlin said that, under the present reality of the State of Israel, the justice system has a more fateful task in upholding the rule of law and in conducting a just hearing. 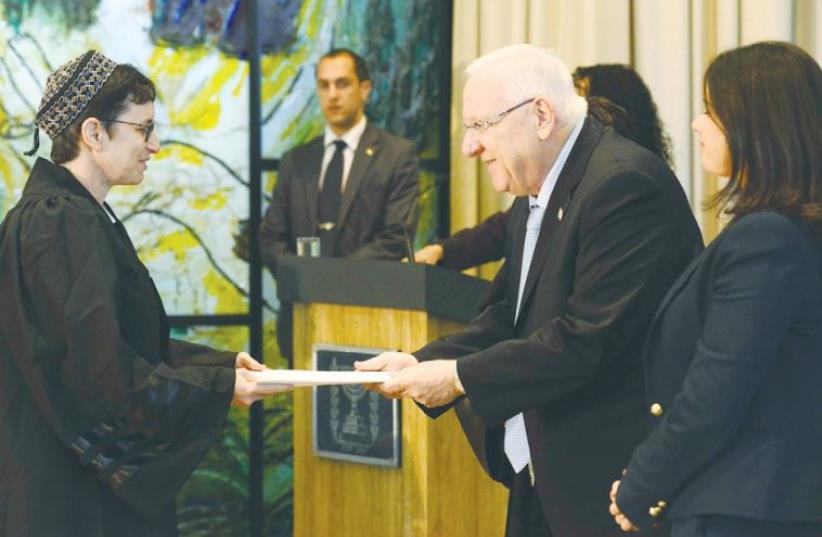 PRESIDENT REUVEN RIVLIN officiates at the swearing-in of 21 newly appointed judges and court registrars at his residence
(photo credit: GPO)
Advertisement
The first 21 new judges and court registrars appointed in 2016 pledged to pursue justice without showing favor or accepting bribes as they took part in the swearing-in ceremony at the President’s Residence on Thursday.In Israel the ceremony is conducted without a Bible or a Koran, but is based solely on a pledge by each appointee to pursue justice. The pledge is made both orally and in writing, then signed by each new judge.The pursuit of justice was the central theme of addresses by President Reuven Rivlin, Supreme Court President Miriam Naor and Justice Minister Ayelet Shaked, for whom this was her second swearing-in ceremony since taking office.The first was last October.However, none of the three confined themselves only to what the role of the judge should be. Their remarks were also directed at society and the media – both social and traditional – which often appoint themselves as judge and jury even before a case comes to court.Rivlin said that, under the present reality of the State of Israel, the justice system has a more fateful task in upholding the rule of law and in conducting a just hearing. Quoting the Torah commandment from the Book of Deuteronomy “justice, justice shalt thou pursue,” Rivlin commented that in recent times it would seem that the court had been transferred to the city square, and even to the “harsh and cruel” court of the virtual city square, which Rivlin said is full of contempt and scorn and passes judgment via the keyboard.True justice, he said, “behooves us to act with caution” in order to arrive at the truth through a balanced approach and the safeguarding of the rights of both the accused and the victim; and defense of what is in the public interest – a sturdy independent system with an appeal process and re-examination.”Judges should not be influenced by the media, because that is not the way to gain the confidence of the public, stated Rivlin. The trust of the public is the cornerstone of our democracy.It makes no difference whether we belong to the political Left or the political Right, conservative or radical, Jews or Arabs, religious or secular, new immigrants or veterans – a strong independent justice system is the essence of the lives of us all ” He urged the judges to be impartial and unafraid, and to simultaneously protect the rights of the weak, of minorities and the law itself.Invoking the oft quoted statement by prime minister Menachem Begin, who was one of Rivlin’s personal heroes, that there are judges in Jerusalem, Rivlin said: “There are judges in Israel, not only in Jerusalem – and we need them, their talents and their abilities.”Naor warned the new appointees that as judges they would be subjected to considerable criticism and castigated for being either too harsh or too lenient. Criticism is desirable, important and necessary in a democracy, she said, but only when it is relevant and conducted both in style and content within the norms of democratic discourse.Naor herself was critical of the mounting criticism of the courts, especially the High Court of Justice by many people on the Right of the political spectrum, and insisted that criticism when it is made, be relevant and rational and should deal with the facts and not with personalities.Naor emphasized the importance of distinguishing between legitimate criticism and veiled threats, and stated that criticism should be free of any form of incitement.What she found most disturbing was the ongoing phenomenon of the defaming of judges with slanderous charges that had no bearing on the rulings they had given in the cases that had come before them. She was also perturbed by the use of foul language.This is something to which she is totally opposed, just as she is opposed to demands for the dismissal of certain judges, she said.”Shaked, like Rivlin, stressed the importance of the public’s confidence in the judiciary and the pursuit of justice, and said that the media are often selective in promoting causes or making judgments that are not accord with those of the courts.Nonetheless, she declared, it was important to listen to the diverse voices in Israel’s society.Israel’s judges she said, are in a more extremely vulnerable position than their peers in other countries, certainly with regard to the manner in which they are lambasted by the media.Yet for all that she is proud, she said, that despite all the criticism, High Court decisions passed in recent months had been on the basis of facts presented to the court and not on what was published in the media.Of the 21 appointees, 12 were women. All in all there were four new district court judges, 10 magistrate’s court judges, one traffic court judge and six senior registrars.