Iohannis said that Romania attaches special importance to its relations with Israel. 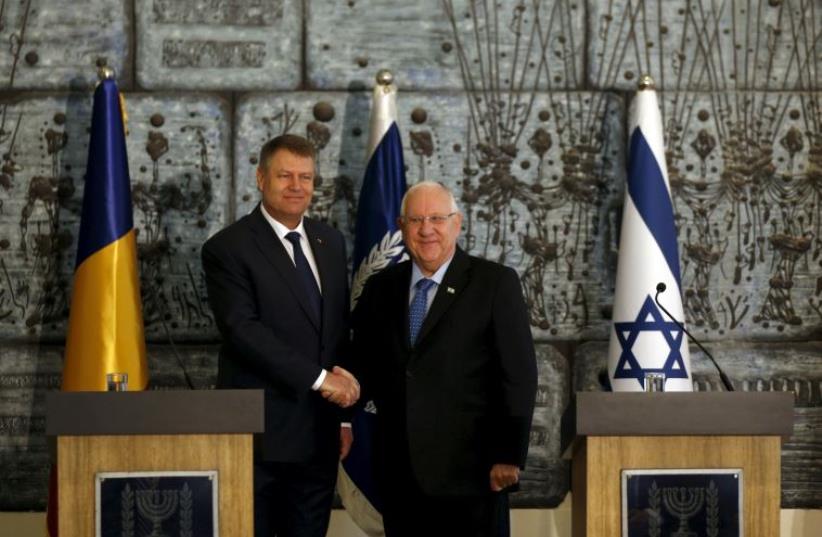 Romanian President Klaus Iohannis (L) shakes hands with his Israeli counterpart Reuven Rivlin as they deliver joint statements before their meeting in Jerusalem March 7, 2016
(photo credit: REUTERS)
Advertisement
Romanian President Klaus Iohannis who is on a state visit to Israel has pledged Romania’s solidarity with Israel in the battle against terrorism, anti-Semitism, racism and hatred.Iohannis made this commitment on Monday at a welcome reception hosted by President Reuven Rivlin at the President’s Residence in Jerusalem.Both Iohannis and Rivlin made the point that on Tuesday, March 8, Romania takes over the presidency of the International Holocaust Remembrance Alliance, an inter-governmental organization founded in 1998 at the initiative of Swedish Prime Minister Goran Persson.Romania has been a member of the IHRA and its predecessor the Task Force for International Cooperation on Holocaust Education, Remembrance and Research since 2004.Romania has also acknowledged its own role in the dark days of the Holocaust.In welcoming Iohannis Rivlin noted that Romania (unlike other former Communist countries), had an unbroken diplomatic relationship with Israel.Romania was among the first countries to establish full diplomatic ties with Israel in June, 1948.Iohannis said that as good as the relationship has been over the past 69 years, during this visit he wanted to focus not only on the past but on the future and the enhancement of friendship and cooperation between the two countries.Both presidents spoke of the need to intensify cooperation in the spheres of politics, health, economics, scientific and technological research, cyber, culture and defense strategies.Rivlin, in reference to Iran sponsored terrorism, said that only a week earlier, there were again declarations from Iran promoting Israel’s demise.Iohannis said that Romania attaches special importance to its relations with Israel and that Israel’s uncompromised security is important to Romania, just as the fight against terrorism is one of Romania’s strategic priorities in its aim to contribute to peace in the world.He saw great potential in the ongoing relationship between the two countries.