Margalit accuses government of sparking violence by not giving in to Palestinian hunger-strikers’ demands. 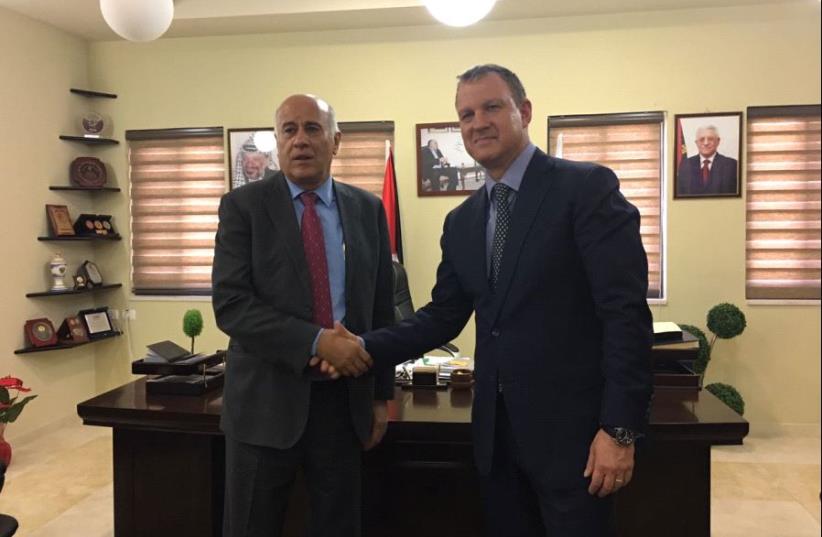 Erel Margalit and Jibril Rajoub
(photo credit: EREL MARGALIT'S OFFICE)
Advertisement
Public Security Minister Gilad Erdan and Labor leadership candidate MK Erel Margalit sparred Friday over the latter’s visit with Jibril Rajoub, a Fatah leader and convicted terrorist, in which Margalit called on Erdan to give in to the demands of Palestinian prisoners on hunger strike.“The right-wing government is cooking up an intifada because of a pay phone,” Margalit said. “[Prime Minister Benjamin] Netanyahu and Erdan are ignoring Israel Prisons Service recommendations and igniting the situation over nonsense like installing pay phones for prisoners. These are not leaders; these are irresponsible pyromaniacs.”Erdan said Margalit is “giving a tailwind to terrorists that are responsible for the deaths of hundreds of Israelis.”The minister took issue with Margalit’s claim that the hunger strike is over a pay phone, saying that Margalit lied, and that they have a much longer list of demands, including newspapers, dozens of television channels and more visits.
Palestinian prisoners in Israel prepare for a massive hunger strike. (Reuters)
“I will not negotiate with terrorists... We all understand that this is a hunger strike for political needs and all the security forces recommend not giving in to them, because it is clear that capitulating will hurt Israel’s deterrence and security,” Erdan said.Erdan also pointed out that Rajoub is a major advocate of boycotting Israel and attempted to have Israel thrown out of FIFA and other institutions, and said that Margalit’s visit legitimizes him.“I know there are sane parts of the Left, unlike Margalit, who is harming Israel’s security interests,” he added.Margalit is running for head of the Labor Party in the party’s July 4 primary. This week, he began his campaign with the slogan “The Left is back.” Even before his campaign was officially initiated, he released a series of videos whose angry tone and frequent use of expletives made them a subject of parody.In his meeting with Margalit in Ramallah on Thursday, Rajoub expressed hope that “Margalit and others will help us bring calm to the streets before it is too late.”Rajoub, who heads the Palestinian Olympic Committee and the Palestinian Football Association, served multiple prison sentences in Israel for terrorism-related offenses and was exiled from the West Bank before the Oslo Accords. He briefed Margalit ahead of Palestinian Authority President Mahmoud Abbas’s meeting with US President Donald Trump and said he sees the United States as a strategic partner in reaching an agreement with Israel.“We believe that President Trump can and has the will to solve the conflict,” Rajoub stated, according to Margalit’s office. “My nation and I suffered under the occupation for 50 years, which is an existential threat to Israel.”Margalit presented Rajoub with his plans for Palestinian economic development, including joint Israeli- Palestinian industrial zones, saying that trust must be built between the two nations and that Netanyahu destroyed the trust that was there in the past. Margalit’s rivals in the Labor primary also came out against him for his comments to Rajoub.Opposition leader Isaac Herzog (Zionist Union) said, “The Zionist Left pursues peace but also chases down terrorists. [Margalit’s comments] are contrary to all the values of the Zionist center-left in Israel and hurt our ability to form a large bloc that can replace the current government.“I firmly condemn all support for the hunger-striking prisoners,” Herzog added, “a large part of whom have Israeli blood on their hands. I expect MK Margalit to clarify his remarks.”MK Omer Bar-Lev (Zionist Union) said that not only did Marwan Barghouti, the Fatah terrorist leading the hunger strike, “succeed in dragging the coalition into his Palestinian political campaign, but Margalit is taking part, too, and voluntarily.”