The slogan for the rally will be "Israel is united against terrorism." 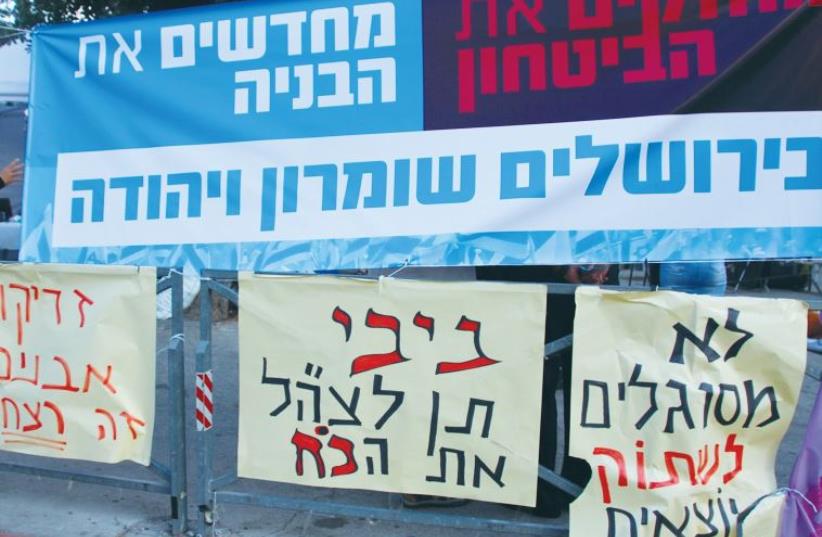 PROTEST SIGNS seen last week at the settler encampment near the Prime Minister’s Residence in Jerusalem call for action against terrorism
(photo credit: TOVAH LAZAROFF)
Advertisement
Residents of Judea and Samaria plan to hold a large rally in Paris Square near Prime Minister Benjamin Netanyahu’s Jerusalem home on Tuesday night to demand better security against terrorist attacks.The slogan for the rally will be “Israel is united against terrorism.”Rally organizers are also calling for new building as the best response to the wave of Palestinian violence that is sweeping the country.Led by Samaria Regional Council head Yossi Dagan, settlers have been manning protest tents in front of Netanyahu’s home since October 1, when Palestinian gunmen killed Eitam and Naama Henkin as they drove with their four children to their home in Neria, a small community in the West Bank.The protesters received a boost of support from Likud and Bayit Yehudi politicians. Dagan himself is a Likud member, as are many of the settler leaders.On Sunday, Interior Minister (Likud) Silvan Shalom visited Dagan, and spoke against Palestinian incitement and the need to deal harshly with terrorists.But not all settlers leaders support Dagan’s protest. Only 14 regional and local council heads from Judea and Samaria attended a meeting Sunday of the Council of Jewish Communities of Judea and Samaria.The council itself had planned an additional protest in front Netanyahu’s bureau during the weekly government meeting, but canceled it for lack of support.It did, however, decide to proceed with Tuesday’s rally, and to continue its support of Dagan’s protest.Jordan Valley Regional Council head Dudu Elhayani, however, has been among those who have opposed Dagan’s protest. He told The Jerusalem Post that it is the wrong time for this kind of protest.“This wave of terrorism is not about the settlements, it impacts the whole country,” said Elhayani, pointing out that terrorist attacks have occurred in Jerusalem, Kiryat Gat, Tel Aviv and Afula.“We all have to unite around the prime minister and the defense minister, to embrace them and to support them,” Elhayani said. Along with the IDF and the police, they are working night and day to defend us. “If we hold this kind of a protest now, what kind of a message are we putting forward as leaders, that you can not trust the prime minister or the defense minister?” He charged that Dagan was exploiting the situation to gain political points with this voters.But Dagan has said that he himself does not oppose the prime minister.It strengthens Netanyahu’s hand to take the necessary steps to combat terrorism and strengthen the settlement movement if he sees how many citizens support those options, Dagan said.He began the protest after the Henkin murder, Dagan said, because he didn’t want to return home unless he had some answers for residents of his council.