The justice minister and Bayit Yehudi star-MK said that the connection was strong even under the Obama administration, despite disagreements over the Palestinian issue. 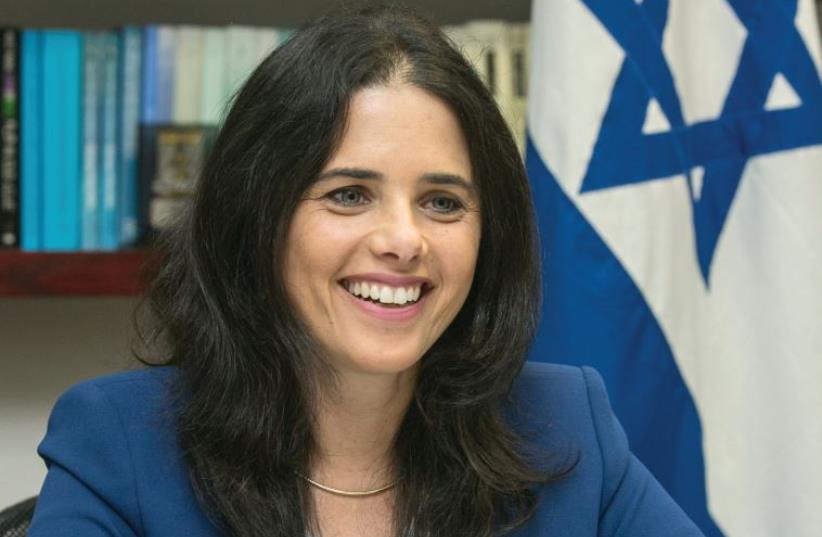 Justice Minister Ayelet Shaked
(photo credit: MARC ISRAEL SELLEM)
Advertisement
The US-Israel alliance and support from the Trump administration is strong, but the president is wasting time chasing a peace deal between Israel and the Palestinians, Justice Minister Ayelet Shaked told The Jerusalem Post in a recent interview.Trump “should not waste time trying to get the ultimate peace deal done – it won’t happen,” Shaked said.“There is very strong connection between us and the US. We are allies with common values and a true partnership, no matter who sits in the White House and on Balfour Street [in the Prime Minister’s Residence], whether with Democrats or Republicans,” said Shaked.The justice minister and Bayit Yehudi star-MK said that the connection was strong even under the Obama administration, despite disagreements over the Palestinian issue.However, she said Trump’s election had been a “historic chance to change the rules of the game, and not merely to impact the tactical situation.Trump was ready for this,” asserting that Prime Minister Benjamin Netanyahu had “missed a historic chance to change everything and get rid of a Palestinian state” forming along Route 6 in Judea and Samaria.Instead, so far it appears that the Trump-Netanyahu negotiations over settlement building have mostly excluded building outside of the settlement blocs – a position anathema to Bayit Yehudi.Like Netanyahu, Shaked, who will speak at The Jerusalem Post Conference in New York on May 7, and others on the Right like to discuss moderate Arab Sunni states joining an alliance with Israel as a different path to peace rather than negotiations with the Palestinians.But pressed on how this would work when all of these states still demand a two-state solution, Shaked hinted that the Sunni states may be saying something else behind closed doors, in light of their common interests with Israel economically as well as in opposing Iran.She has also made waves recently, for the first time announcing she would someday run for prime minister and with flattering surveys showing that she could win more Knesset seats heading Bayit Yehudi than Naftali Bennett (though she has made it clear she would never run to oust him).How did a secular woman become so popular among a religious public where men are much stronger in the public sphere? “They are completely ready for a secular woman because of how active and effective I am...We [she and Bennett] did big things for the religious Zionist community... which no one has done... No one has been as conservative and right-wing as me” as justice minister, she said.Would she ever leave Bayit Yehudi for the Likud to give her a better chance to become prime minister? She said she is not interested and “loves the party” of Bayit Yehudi.Asked if she loves some of the more criticized and sensational comments by her fellow Bayit Yehudi lawmakers Bezalel Smotrich and Moti Yogev, she responded, “I don’t love everything they say, but they are mostly good MKs.”Moving on, the discussion turned to what she recently called her “historic” victory in appointing more conservative justices to the Supreme Court.How did Shaked achieve this victory? Shaked was pressed as to whether her threat to Supreme Court President Miriam Naor to change the law about appointing judges, so that she and the political wing of the Judicial Selection Committee could pick new justices without the current justices’ votes, got Naor to move in her direction.Faintly smiling (and possibly flattered), Shaked said, “So you say.” However, while Shaked did not want to outright admit she had successfully pressured Naor into folding, she did add, “The law about appointing judges is not sacred. I was ready to change it. And still I think maybe I will change it.”Aside from freeing her from having to compromise with the current justices, Shaked was asked why she would change the law.She said, “It [the current arrangement] has good aspects regarding achieving consensus” among the different factions within the country, since all factions can block an appointment, but “sometimes we don’t pick the best candidate and pick the second best” to avoid disagreement.Shaked bemoaned that her top pick for the court, Bar-Ilan University Prof. Gideon Sapir, was kept off the court due to fierce opposition by the current justices to his outspoken conservatism.She was asked specifically about justice-appointee Yael Willner. In the past, Willner was opposed by the Right because she was perceived as an activist, having clerked for former Supreme Court president Dorit Beinisch.But in this round, Willner was one of Shaked’s picks from the Right, and the Left pushed back against her, saying she might be too conservative because of her Orthodox religious beliefs.The justice minister rejected the characterizations and said Willner was totally accepted by the Right and was picked because she is highly qualified.While Shaked resisted “tagging” any of the justices politically, she did agree that all of the justices and judicial candidates “have a worldview. Law isn’t exact math. A judge’s worldview comes through. It is not all black and white. There is a lot of gray” in how judges make their decisions.She said that three independent staffs had reviewed decisions and articles written by all of the candidates to allow a better feel for each candidate.Yet even after her victory in this round of appointments, it will only be when two more justices retire in 2018 (having reached the mandatory retirement age of 70) that Shaked might be able to change the majority on the Supreme Court from activist to conservative.Asked if she is gearing up for that battle, she was not excited to be perceived as pressuring the current justices before any negotiations on appointing their successors have taken place. She did volunteer, however, that “I assume judicial decisions will take place by the end of the year and my approach will be the same.”