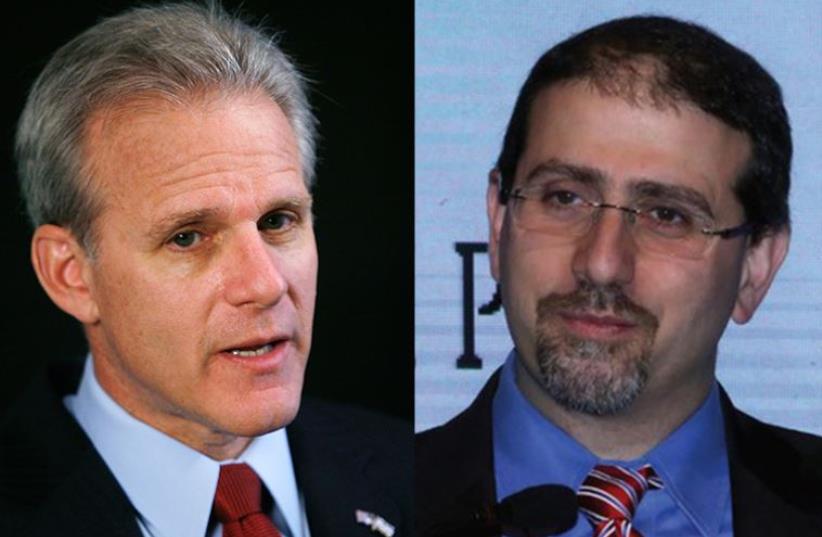 Dan Shapiro and Michael Oren
(photo credit: REUTERS,MARC ISRAEL SELLEM/THE JERUSALEM POST)
Advertisement
US Ambassador Dan Shapiro took on his former counterpart Michael Oren on Wednesday, saying that his description of US-Israel ties under US President Barack Obama “does not reflect the truth.”Oren, who has just written a book on his years as Israel's ambassador to the US from 2009-2013 during a period of the strained relationship between Obama and Prime Minister Benjamin Netanyahu, wrote in a Wall Street Journal piece Tuesday that Obama intentionally abandoned two core principles of Israel's alliance with America: no public daylight between the two states, and no surprises.Labeling Oren's account in the Wall Street Journal an “imaginary version” of events, Shapiro said in an Army Radio interview that he does “not agree with those who say that we do not have close coordination, and were not always in very close professional contact with the Israeli government, including the relationship between President Obama and Prime Minister Netanyahu.”Asked how he would describe that relationship, Shapiro said “effective, and serving the interests of both countries, and even more than that – close.”Challenged for calling the relationship between Netanyahu and Obama close, Shapiro said that the very close relationship between the two countries military establishments and intelligence services does “not come from the sky, it comes from decisions made by these two leaders who respect one another, who know how to work together to serve their mutual interests."Shapiro, who began his comments by saying that Oren – now a Kulanu MK – is a friend, said “clearly I don't agree with what he wrote.”Shapiro noted that Oren is no longer an ambassador, but now a “politician and an author who wants to sell books.”“I can say as an ambassador that sometimes ambassadors have a very limited view of the conversations between the leaders, and his description does not reflect the truth about what happened,” the US envoy said.