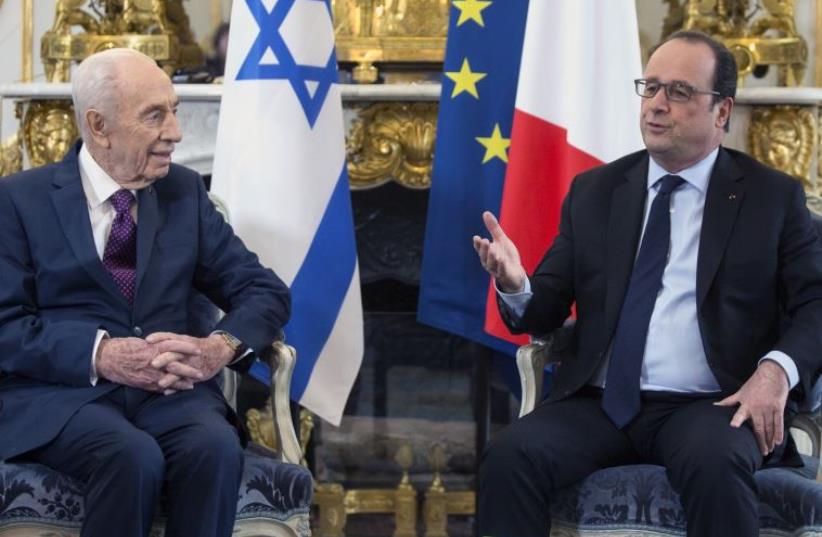 Former Israeli President Shimon Peres (L) discusses with French President Francois Hollande during a meeting at the Elysee Palace in Paris, France, March 25, 2016.
(photo credit: REUTERS)
Advertisement
In June 2014, just prior to the conclusion of his tenure as president, Shimon Peres flew to Rome where he joined Pope Francis and Palestinian Authority President Mahmoud Abbas in a united prayer service for peace.At the completion of the service, the pope urged both leaders to act with courage and to do their utmost to achieve peace in the Middle East.Last week, Peres traveled not to Rome but to Paris on a similar quest – but this time Abbas was not part of the endeavor, nor was the pope. Peres was more intent on speaking to the spiritual leaders of the Jewish and Muslim communities of France.In the aftermath of terrorist attacks in Turkey and Belgium, Peres who was already going to Paris to sign a cooperative agreement between UNESCO and the Peres Center for Peace, reinforced a previous conviction that spiritual leaders can do more than politicians to stop the bloodshed.Peres also met with Prime Minister Manuel Valls and President François Hollande, impressing on them that the struggle against terrorism and against BDS is not only Israel’s fight, but a challenge that affects the whole world. The campaign against terrorism, he said, is one that has to be fought efficiently and professionally before terrorism intimidates and takes over Europe.In this war, there is no room for compromise, Peres emphasized.He went on to say that the only way that terrorism can be defeated is by uniting the world and all of her religions. Focusing on the strength of relations between Israel and France, Peres said that he had no doubt that the friendship would continue to strengthen in the future in the light of security and scientific cooperation between the two countries. He offered France any assistance that Israel could give in the fight.The offer was reciprocated by both Valls and Hollande who said that France would stand by Israel not only in the fight against terrorism, but also in the fight against anti-Semitism.At the UNESCO signing ceremony, Peres said that most people in the world seek peace and happiness for their children.UNESCO Director-General Irina Bokova welcomed Peres as “a great statesman, a great humanist and a great friend of UNESCO,” and said that his commitment to science, innovation and dialogue resonates at the heart of UNESCO’s mandate to build peace, and to foster human talent, innovation and intelligence.Bokova also commended Peres for his many years of work to cement relations with countries around the world in fields of education, culture and research.Peres is due to return to Israel on Sunday.