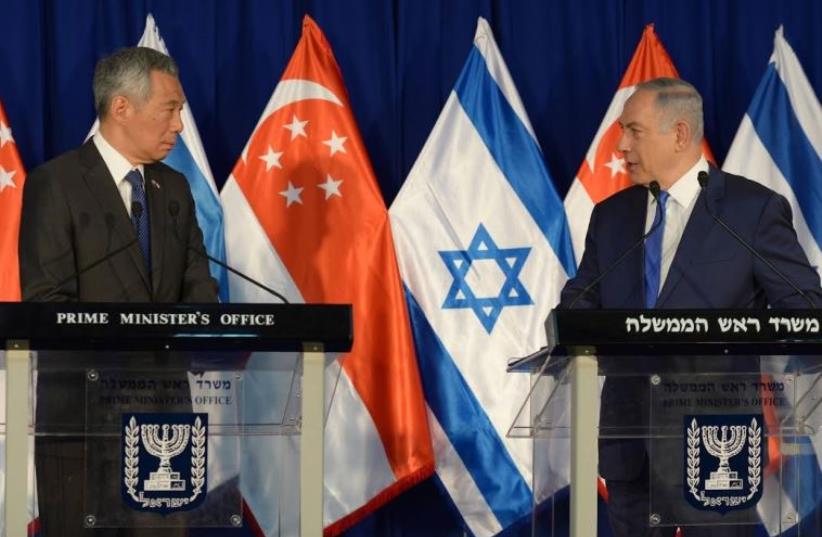 Singapore Prime Minister Lee Hsien Loong and Prime Minister Benjamin Netanyahu in Jerusalem, April 19, 2016
(photo credit: HAIM ZACH/GPO)
Advertisement
The burgeoning relations between Israel and Singapore were built on strong military ties, Singapore Prime Minister Lee Hsien Loong said Tuesday in an unusual public admission by an East Asian country of a close military relationship with the Jewish State.“We have a long and deep relationship between Singapore and Israel,” Lee said before meeting Prime Minister Benjamin Netanyahu at his Jerusalem office. “But really it all started with a defense relationship.We are very grateful to Israel that when independence was thrust upon us in August 1965 and when Singapore’s security and survival were in doubt, you helped us.The IDF helped us to build up the Singapore Armed Forces when other countries turned us down.”The countries that spurned defense ties with Singapore were Egypt and India, he said.Tuesday was the second day in a row that Lee, the first Singaporean prime minister ever to visit Israel, openly discussed the long-standing military relationship between the two countries, having done so at even greater length Monday when he received an honorary doctorate from the Hebrew University of Jerusalem.Although the ties today between the two countries have blossomed far beyond defense ties, and now include some $1.35 billion in trade, huge Israeli investments in Singapore, as well as extensive academic and cultural ties, the military relationship remains significant, with Singapore believed to be one of Israel’s main arms markets.This is Lee’s second time in Israel, having come in 1977 as a young army officer accompanying the country’s chief of staff on a visit. That chief of staff, Winston Choo, is now the island country’s ambassador in Tel Aviv.“And I’m very happy to be back here again after all these many years to thank you personally, and to thank Israel for your help and support over the years, and to see for myself developments in Israel, which we follow closely from a distance,” Lee told Netanyahu.That Lee was willing to come to Israel now, one government official noted, is significant since in the past the country’s prime ministers were concerned about how such a visit would be seen by Singapore’s two giant neighbors with large Muslim populations – Indonesia and Malaysia.In 1986, Singapore’s relationship with Malaysia took a nosedive after then President Chaim Herzog visited the country for three days. Today, the official said, Singapore has overcome its wariness about offending its neighbors and is willing to be open and public about its relationship with Israel.Netanyahu, who termed Lee’s visit “historic,” said that it “reflects a coming of age” in the relations between the two countries.“There is a deep friendship between Israel and Singapore,” Netanyahu said. “We have so much in common. We are small nations that leave a very large imprint on the world scene. ”Singapore has a population of 5.4 million, while Israel has 8.5 citizens.Netanyahu said that both small countries “punch above our weight” on the world scene, with Singapore an economic powerhouse, and Israel a technological one. “Today we are anchors of stability and strength in our respective regions,” he said.