The identities of the three dead men have not been released and the bodies are at the L. Greenberg Institute of Forensic Medicine at Abu Kabir in Tel Aviv for identification. 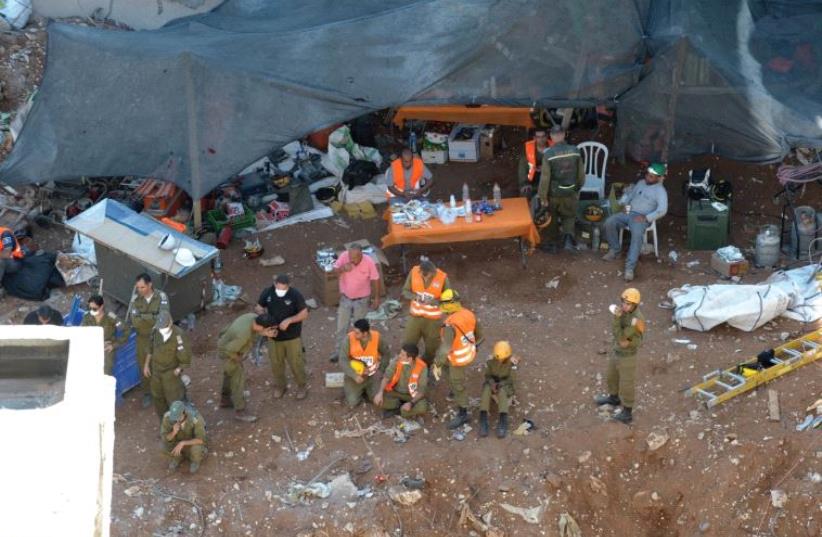 RESCUE PERSONNEL work at the disaster site in northeastern Tel Aviv
(photo credit: AVSHALOM SASSONI)
Advertisement
Rescue workers on Saturday afternoon evacuated the sixth body from the collapsed parking garage in Tel Aviv’s Ramat Hachayal neighborhood, thus closing a grueling six-day search effort.IDF Home Front Command rescue workers located the fourth and fifth bodies on Friday afternoon and night, respectively.Muhammad Dawabsha, 29, from Duma southeast of Nablus was confirmed dead by police on Sunday the identities of the other two bodies have not been released. Three bodies found last week were all of construction workers: Oleg Yakibob, 60, from Tel Aviv, Denis Dyanchenko, 28, a Ukrainian national, and Ahad Alhaj, 34, from Beit Rima, northwest of Ramallah.The four-level underground parking garage was under construction when it collapsed on Monday injuring at least 23.Three floors collapsed entirely, making it difficult for rescue workers to reach those trapped on the lowest level.The reason for the calamity remains unclear and a police investigation into the matter is under gag order. The garage passed inspection in June.A meeting of the Knesset Labor, Welfare and Health Committee was held on Thursday to discuss the disaster and general construction workers’ safety in Israel.At the meeting, chairman Eli Alalouf said that the committee had repeatedly issued warnings and recommendations to improve construction safety. “We warned of massive negligence at construction sites and a lack of preparation and coordination by government offices,” Alalouf said. “We saw how these disasters were not being prevented, even though many of them were avoidable. The desire to cut costs and finish construction quickly causes carelessness and tragedies.”Alalouf said workers are afraid they will be fired if they complain about the conditions at construction sites.An initial report by the Economy Ministry safety administration revealed that the construction company building the lot, Danya Cebus, had a history of violations.However, the June inspection of the site revealed no safety defects.Ronen Ginsburg, director-general of Danya Cebus, told the Knesset committee there was an engineering failure, and it was not a matter of an unsafe construction site. “Danya Cebus’s top priority is safety. We have 12 safety supervisors, more than any other company,” he said on Thursday.There have been 32 construction-related deaths and 155 injuries in 2016, including from the Ramat Hachayal collapse, according to data gathered by Yediot Aharonot and the Coalition Against Building Accidents. Construction accidents largely effect Arab Israelis and Palestinians, the data show. In 2015, 38 workers were killed, and among them 75 percent were Arab Israelis or Palestinians; 20% were foreign workers from China, Eastern Europe or Turkey; and around 5% were Jews.From 2011 to 2016, 21 indictments were filed dealing with accidents in the construction industry.Lahav Harkov contributed to this article.