Chemi spoke after sitting vigil with his family by his father’s bedside as the veteran diplomat and politician slowly slipped away. 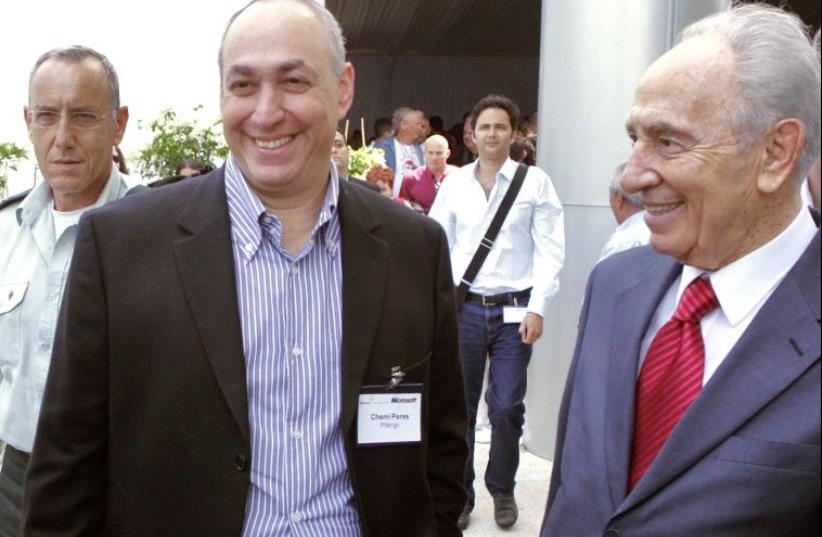 Chemi Peres (L) standing next to his father, former President Shimon Peres in 2008
(photo credit: JACK GUEZ / AFP)
Advertisement
The son of former president Shimon Peres mourned the passing of his father on Wednesday, hours after the 93-year-old statesman passed away.“Today, with deep sorrow we bid farewell to our beloved father,” said Chemi Peres, as he delivered a short statement to reports at Sheba Medical Center in Ramat Gan.Chemi spoke after sitting vigil with his family by his father’s bedside as the veteran diplomat and politician slowly slipped away two weeks after suffering a massive stroke. He “was one of the founding fathers of the State of Israel,” Chemi said.
Israel"s Shimon Peres, 93, dies in Tel Aviv
“He served his people even before the state of Israel was created and until his last day,” Chemi said.“Throughout his 70 years of public service he committed and devoted to Israel, serving as the 9th president, prime minister, defense minister and a host of other roles,” Chemi said.“My father use to say, you are only as great as the cause you serve,” said Chemi.His sole focus was to serve until his last breath the people of Israel who he so loved, Chemi said.He thanked the hospital staff, who he said, had acted as if they were “angels” and expressed the family’s gratitude to the friends and the public who had enveloped his father with love.“I know how much he loved you,” Chemi said. In his life and deed his father ordered them to focus on the future with “fearlessness and wisdom” with which “we would always pave a path for peace.”It was a private privilege and honor to have been part of his father’s family, Chemi said. But “the loss we feel today is that of the entire nation. We are all in pain,” he said.At Peres’ request, his corneas were donated to the National Transplant Center.