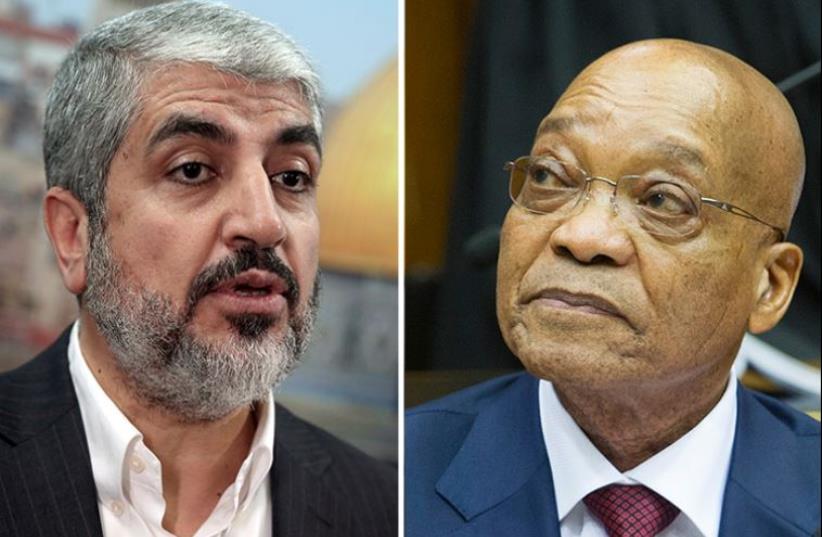 Khaled Mashaal and Jacob Zuma
(photo credit: REUTERS)
Advertisement
On the same day that the Israeli media reported Hamas calling on its members to carry out suicide bombings against Israelis, South Africa's African National Congress (ANC) Party hosted Hamas head Khaled Mashaal in a move that infuriated Jerusalem.According to South Africa’s Radio Islam, which posted a picture on its Twitter feed of Mashaal meeting South African President Jacob Zuma, Hamas’s “political and decision making body is visiting South Africa to engage with the leadership of the ANC on the party’s shared vision of self-determination for the Palestinian people and a free, independent and sovereign state of Palestine, liberated from Israeli occupation.”The delegation arrived on Sunday, and will be in South Africa until Wednesday, holding a “public rally” in Cape Town that day. On Tuesday, according to a schedule put out by the ANC, the delegation will meet separately with Muslim representatives, Catholic Bishops, and a “progressive Jewish group.”Foreign Ministry spokesman Emmanuel Nachshon said the ministry called in South Africa’s deputy ambassador to protest the visit.The invitation to Mashaal to visit, he said, “gives support and encouragement for terrorism and pointedly ignores the position of the international community, which views Hamas as a terrorist organization.”One senior government official said that a whole generation of leaders fought for freedom in South Africa, and “it is now a pity to see South Africans today embrace someone who wants to stamp out freedom for both Israelis and Palestinians.”The official noted that it was former UN secretary-general Kofi Annan who set the three benchmarks for engagement with Hamas: recognizing Israel, giving up terrorism, and accepting previous Israeli-Palestinian agreements.A decade later, the official said, Hamas has failed to meet even one of those benchmarks, which is why most of the international community – with the exception of Turkey and Qatar – refuse to give legitimacy to the organization.It is a shame, the official said, not only that South Africa is out of step with the international community, but also that a democratic elected government would give legitimacy to an organization that is giving its vocal support to the “butchering of Israeli civilians.”Radio Islam quoted Moulana Ebrahim Bham, the secretary general of Jamiatul Ulama South Africa, the country’s Council of Muslim Theologians, as saying the visit has “been on the cards for some time.”“There have been some difficulties and certain considerations.The ANC have taken a very strong stance on the Palestinian issue from time immemorial, from their very inception and it has been a principle stand by and large.”Bham continued, “The ANC has always been associated with the Palestine Liberation Organization... and their relationship with Hamas has been on that basis that we recognize the Palestinian Authority because of our past history.”The radio station also quoted Naeem Jinnah, the director of a Johannesburg-based institution called the Afro-Middle East Center, as saying it was clear that the ANC and the government “worked extremely hard to make sure that this trip was kept secret right until the end. So I think the Zionist lobby will be extremely upset, as well as the Israeli embassy. You can bet that today, tomorrow there will be letters of protest.”South African media reported that over the summer Jinnah was denied entrance to Britain to attend a conference because of national security concerns.The South African Zionist Federation issued a statement condemning Hamas’s visit to the country in “the strongest terms possible,” saying that Hamas has “enthusiastically endorsed the cold-blooded murder of Israeli civilians and instigated dozens of lethal attacks against them.”“Contrary to what is claimed, the ideology, values, aims and strategies of Hamas are diametrically opposed to the principles of the ANC, as embodied in the Freedom Charter,” the statement continued.“At its recent National General Council, the ANC reaffirmed its support for a negotiated, two-state solution to the Israeli-Palestinian conflict.Hamas, by contrast, does not support, nor has it ever supported, the creation of an independent Palestinian state co-existing in peace alongside Israel.”Hamas, the statement continued, “wishes to destroy Israel altogether and seeks to establish an Islamist dictatorship in its place.” As a result, “unless the purpose of the ANC meeting with Hamas is aimed at radically moderating and aligning Hamas with the position of the South African government, then any such engagement will simply prove both futile and counter-productive to genuine efforts aimed at the peaceful resolution of the conflict.”