Netanyahu has come under criticism from Naftali Bennett and Yair Lapid for not holding in-depth discussions and preparing adequately for the Hamas attack tunnels. 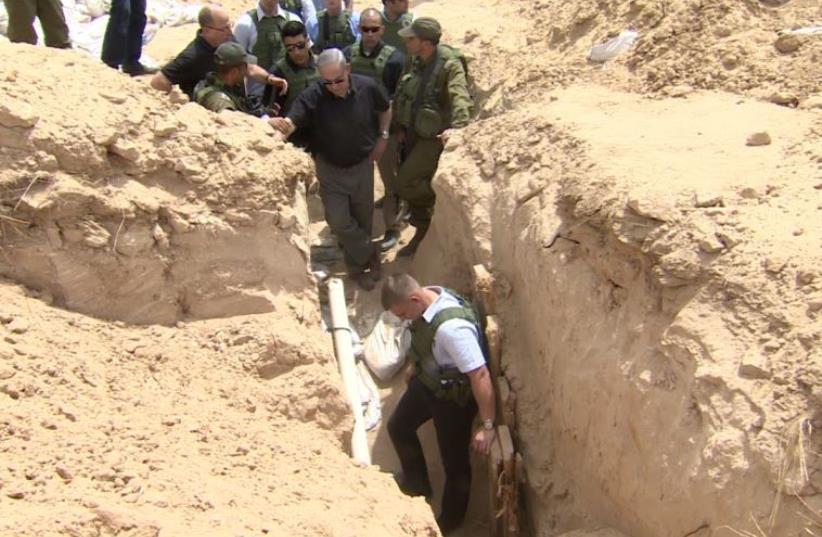 Netanyahu stands next to Hamas tunnel
(photo credit: screenshot)
Advertisement
Prime Minister Benjamin Netanyahu categorically denied on Sunday that he had an interest in “burying” the upcoming State Comptroller’s report on Operation Protective Edge, saying his interest was that the “truth” emerge about how the security cabinet prepared for the 2014 conflict.In recent days, Netanyahu has come under sharp criticism from Education Minister Naftali Bennett (Bayit Yehudi) and former finance minister Yair Lapid (Yesh Atid) for not holding in-depth discussions and preparing adequately for the Hamas attack tunnels that emerged as a deadly threat during the war. All three men were members of the security cabinet in 2014. In a two-and-a-half-hour briefing with diplomatic reporters in his office on Sunday, Netanyahu – in off-the-record remarks – did his best to debunk these claims.On the record he said the following: “It is absurd to think we want the report buried. We are interested in all the truth about Operation Protective Edge coming out.” He added that he was interested in making public the information on preparedness both before and during the war regarding the tunnels.Bennett, meanwhile, kept up the heat on Netanyahu over the Gaza Operation, telling reporters before Sunday’s weekly cabinet meeting that Israel had sent its soldiers into the Gaza Strip two years ago to destroy the tunnels, but “mistakes were made and the operation lasted longer than necessary. We don’t need 51 days to beat Hamas.”He said the comptroller had invested months in “studying the issue so that we can get a true picture about what happened in order to improve.”He also advised everyone to be patient until the release of the report, which he termed “serious, thorough and honest.”“I trust the state comptroller, and we need to accept his recommendations and implement them,” he said.