Bennett warned that his party would leave the coalition if the evacuation was not postponed or cancelled. 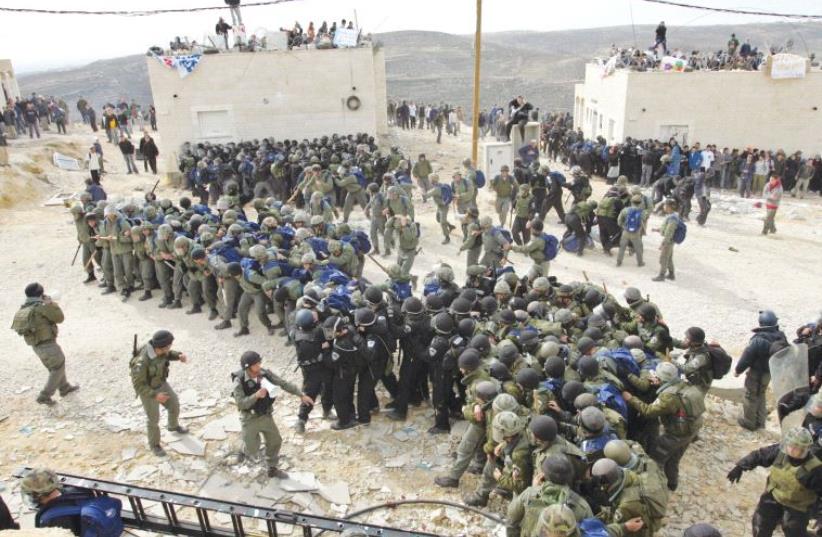 ISRAELI POLICEMEN gather in 2006 to remove the outpost of Amona.
(photo credit: REUTERS)
Advertisement
To stave off a political crisis the state plans to ask the High Court of Justice to delay by six months the December 25th demolition of the Amona outpost so that it can examine relocation options.It did so after Education Minister Naftali Bennett, who heads the Bayit Yehudi party, reportedly issued an ultimatum to Prime Minister Benjamin Netanyahu on Wednesday night.Bennett warned that his party would leave the coalition if the evacuation was not postponed or cancelled.Netanyahu then met on Thursday morning with Bennett, Justice Minister Ayelet Shaked (Bayit Yehudi) and Defense Minister Avigdor Liberman, in an effort to find a solution. At the conclusion of the meeting sources said that a postponement would be requested in court.Sources close to Netanyahu said that the decision had nothing to do with Bennett and had been planned for several days.At present the state has no feasible plan to provide alternative housing for the 40 families that live in modular homes on a hilltop just outside of the Ofra settlement in the Binyamin region of the West Bank.Separately, many of the Likud and Bayit Yehudi Knesset members have declared their support for a bill that would retroactively legalize 2,000 illegal settler homes, including those in the Amona outpost. Left wing parliamentarians immediately attacked the decision. Zionist Union MK Zipi Livni said, "As usual the government has decided not to decide with regard to Amona and has thrown the hot potato back to the court.""The government will soon attack the legal system and say it has too much power." Zionist Union MK Erel Margalit said "the government is being held hostage by the residents of Amona and their Bayit Yehudi representatives in the Knesset.”“The prime minister caved to their pressure and he will end up crying when Israel is once again condemned,” Erel said. The campaign to save Amona said that it did not trust the High Court of Justice in this matter and that it expected Netanyahu, Bennett, Liberman and Shaked to take immediate action to legalize the outpost."Any other result would lead to the forced removal of thousands of people who will protest removing an entire community,” the campaign said.The outpost was first built in 1995 on private Palestinian land and without the necessary permits from the Civil Administration or the government. But it did receive a NIS 2.1 million grant from the Ministry of Housing and Construction.In 2006, the IDF and the Border Police executed a High Court of Justice ruling and demolished nine permanent homes that had just been completed on the edge of the outpost. The clashes that broke out during the demolitions were among the most violent to have occurred in the history of the settlement movement.Some 200 soldiers, police officers, settlers and activists were injured, during the day-long incident.In 2008, the non-governmental group Yesh Din petitioned the High Court of Justice petitioned the High Court of Justice against the entire outpost, with the state initially promising to remove it.After a number of delays and complicated legal twists and turns, the High Court of Justice in 2014 ruled that the outpost must be demolished within the next two years. In making its ruling the court noted that there was no enough state land in the area to create a viable legal settlement as most of the lots belonged to Palestinian land owners.Plans to relocate the outpost did not occur until this year, with the state first offering the families the possibility of legal lots in an unbuilt area of the Shiloh settlement. When the families refused that option, Defense Minister Avigodor Liberman suggested relocating the outpost to nearby plots of land that he believed could be declared abandoned property.Palestinians have filed papers with the Civil Administration claiming ownership of many those lots, thus appearing to make the plan unviable.Yesh Din said in response that a delay was unnecessary because the state had been given two years to come up with an alternative plan.“Politicians, who now realize that the High Court’s ruling is unavoidable, are attempting to convince the Court to grant them more time so they may seek out a way for voiding the ruling and evade enforcing the law against offenders."The intention of requesting an extension for evacuating the outpost due to the State’s own failings is a disgrace to the rule of law and harms Palestinian landowners, who seek to return to their land,” the organization stated.“Yesh Din expects the Attorney General to stand firm and protect the rule of law and the rights of protected persons in occupied territory, based on the High Court’s rulings in similar cases,” it said.