Giulio Haas, the Swiss envoy to Iran, showed the image during a speech to hundreds of Swiss and Iranian business people at a Zurich hotel on Thursday. 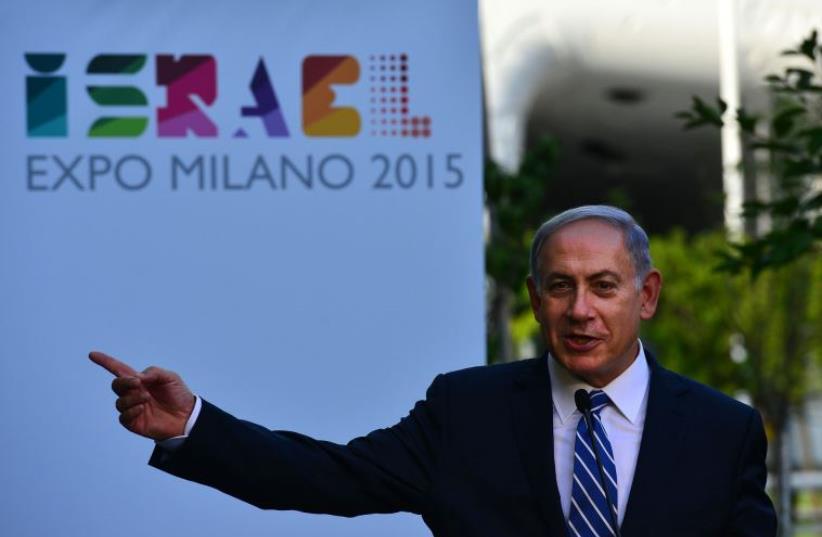 Prime Minister Benjamin Netanyahu visits the Israeli pavilion at Expo 2015 in Milan
(photo credit: REUTERS)
Advertisement
Switzerland expressed regret on Friday after its ambassador to Iran displayed a cartoon depicting two doves defecating on Prime Minister Benjamin Netanyahu's head, at an event promoting Iranian business opportunities.Ambassador Giulio Haas showed the image during a speech to hundreds of Swiss and Iranian business people at a Zurich hotel on Thursday.The Swiss Federal Department of Foreign Affairs (FDFA) said the "questionable cartoon" was used without its knowledge. "The FDFA regrets the use of this cartoon and considers it tasteless," it said in a statement.Haas' address came as Europeans race back to Iran, whose markets and major reserves of oil and gas will be much easier to tap once sanctions are lifted under a global deal struck last month.In his speech, Haas called Iran the "pole of stability in a very, very unsafe region." He urged Swiss businesses not to delay their endeavors in Iran, a potentially lucrative market with a population of 80 million."Ambassador Haas did not intend to insult anybody with the cartoon," the FDFA said. "If that is the case, however, he regrets it and seeks the pardon of everyone who could have felt insulted."The cartoon, a commentary on responses to the deal Tehran struck on July 14 with world powers to limit its nuclear work in return for sanctions relief, shows a pair of doves with US and Iranian flags on their chests atop Netanyahu's head.Netanyahu opposes the pact, saying it will be ineffective and allow Israel's enemy to expand its regional influence.At Thursday's event, Haas displayed the image of the cartoon on an enormous screen, under the title "Iran: now or never.""What this picture shows is, I think now is really the opportunity to assess the market," he said.In the United States, where Iran has long been seen as a regional menace, Congress has until Sept. 17 to vote on the nuclear deal.Switzerland lifted some sanctions on Iran this month, though most remain.Haas urged those gathered in Zurich, including representatives from power products maker ABB, Swiss bank UBS and farm-equipment maker Bucher Industries , not to delay efforts open up to Iran.Switzerland and Israel have at times had fraught relations.In 2009, Israel recalled its ambassador to Switzerland to protest a UN conference in Geneva attended by then-President Mahmoud Ahmadinejad. Israel has also complained to Switzerland in the past about its purchase of natural gas from Iran.In 1998, Swiss banks reached a $1.25 billion deal with Holocaust survivors and their descendants over the fate of funds deposited in Swiss banks by Jews during World War Two.The Israeli embassy on Friday did not immediately return a request for comment on Haas' use of the cartoon.