Druse living under Israeli rule in the Golan Heights believe that some of the Syrians being treated at Israeli hospitals are Nusra Front gunmen. 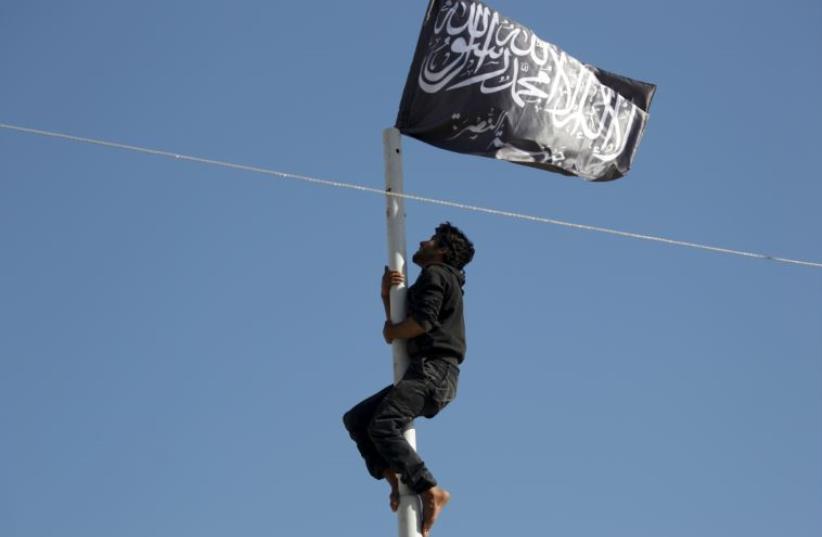 A member of al-Qaida's Nusra Front climbs a pole where a Nusra flag was raised at a central square in the northwestern city of Ariha
(photo credit: REUTERS)
Advertisement
Former foreign minister Avigdor Liberman on Tuesday ridiculed suggestions that Israel is aiding the jihadist outfit Nusra Front, the Syrian branch of al-Qaida and one of the organizations engaged in efforts to topple the Assad regime.“There is no cooperation between Israel and Nusra Front,” Liberman told Army Radio. “There is no intention of [engaging in such cooperation]. It’s simply insane.”Questions over Israel’s purported support for Syrian Islamists have been thrust into the public discourse in recent weeks in light of the distress visited upon the Druse in Syria.Druse living under Israeli rule in the Golan Heights believe that some of the Syrians being treated at Israeli hospitals are Nusra Front gunmen, a contention that has been denied by the government and the military.These suspicions percolated late Monday when a mob of angry Druse attacked an IDF ambulance on the Golan Heights that was transporting wounded Syrian nationals to a hospital.Sheikh Muafiq Tarif, the Druse spiritual leader in Israel, told Army Radio on Tuesday that the community’s anger reached a boiling point following an interview on Channel 2 with one of the injured Syrians being treated in Israel. According to Tarif, the patient was a Syrian rebel who said that he was willing to return to the civil war and harm Druse. “This broadcast stirred up emotions throughout the Druse community,” Tarif said. “The wounded man said that he was going back to Syria to kill Druse. This should’ve sounded the alarm for everyone.”Tarif called for calm and condemned the attack on the ambulance.Earlier this month, two Syrian army soldiers keeping guard in the Syrian Golan village of Hader killed a Druse commander that was serving with them before defecting to the Nusra Front. The two soldiers may have been agents of the Nusra Front.The Nusra Front began an offensive on Hader in the aftermath of the murder which mainly consisted of mortar fire and light weapons fire. The village of Hader, which is right across from northern Israel's Druse town of Majd al-Shams, on the other side of Mount Hermon, is home to some 25,000 Druse.Concerns for Syria's 700,000 Druse has risen in recent days amid the Nusra Front's advances near Hader and the advancement of Islamic State in the region known as Mount Druse, 60 km. from the Jordanian border and 50 km. from Israel’s Golan Heights.The Druse community in Hader and in Israel is concerned over the development because the Nusra Front has sought to control Hader for some time in order to gain control of the entire Golan Heights. The al-Qaida-linked fighters number several hundred men as well as dozens of tanks that they have seized. Five Druse have been injured in the fighting, and they have been offered the chance to come to Israel for treatment, but they refused because they fear the response of the regime of Syrian President Bashar Assad.Amid the threat to Syria's Druse community, the IDF began setting up a field hospital on the border, but they have frozen the process, as the situation has calmed. The IDF has sent messages to the Nusra Front through the Free Syrian Army, warning the Islamist group not to harm Syria's Druse.