"He understood security as well as the diplomatic issues that contribute to it, he was a talking encyclopedia. The man never stopped looking forward, and it was amazing to see it." 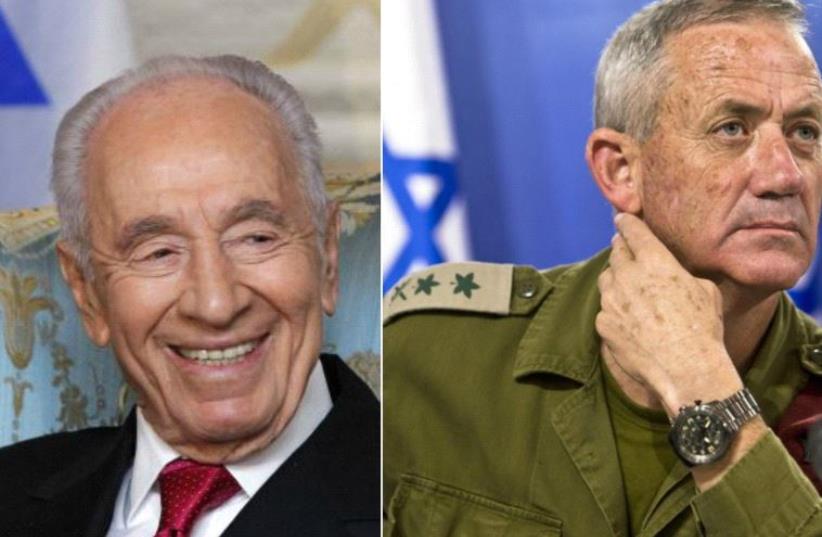 Shimon Peres and Benny Gantz
(photo credit: REUTERS)
Advertisement
Former president Shimon Peres encouraged former IDF chiefs of general staff Gabi Ashkenazi and Benny Gantz to enter politics, the two former generals revealed in interviews given since Peres died last Wednesday.Ashkenazi and Gantz are currently on the sidelines. But they are both expected to seriously consider entering politics ahead of the next general election, unless it is held before Gantz is permitted to start a political career due to a three-year cooling-off period after his term as IDF chief of staff ended in February 2015.“He thought it was right for people who have what to contribute to join national leadership,” Ashkenazi told Channel 2. “He did not say ‘Gabi, go to politics’ but rather ‘you need to be a part of the leadership.’ I am not there yet but he saw me as someone who had what to contribute. He tried to encourage and persuade me to enter politics. It was a great compliment that Peres saw me as someone who could be part of the leadership.”Ashkenazi recalled many conversations with Peres about Iran and relations with Israel’s neighboring countries when he was IDF chief and afterwards. He said getting to know Peres made his respect for him grow even more.“Peres’s image in the world may have been Israel’s strongest brand,” Ashkenazi said. “He was the army’s Protective Edge and Iron Dome. He was our leader who was most respected by the world. He was Israel’s number one soldier on behalf of the state and its future.”Gantz recalled meeting Peres decades ago. He started working closely with Peres when he became prime minister in 1995, following the assassination of then-prime minister Yitzhak Rabin. “He understood security as well as the diplomatic issues that contribute to it,” Gantz told Army Radio. “He was a talking encyclopedia who remembered key aspects of history. The man never stopped looking forward, and it was amazing to see.”Gantz said he was not interested in revealing what they said to each other in private conversations. But he said he learned a great deal from Peres.“I prefer to leave the exact details between us,” he said. “But he did intend to ensure that I would continue in public life. He looked at it from a state-like perspective, not an opportunistic perspective.”