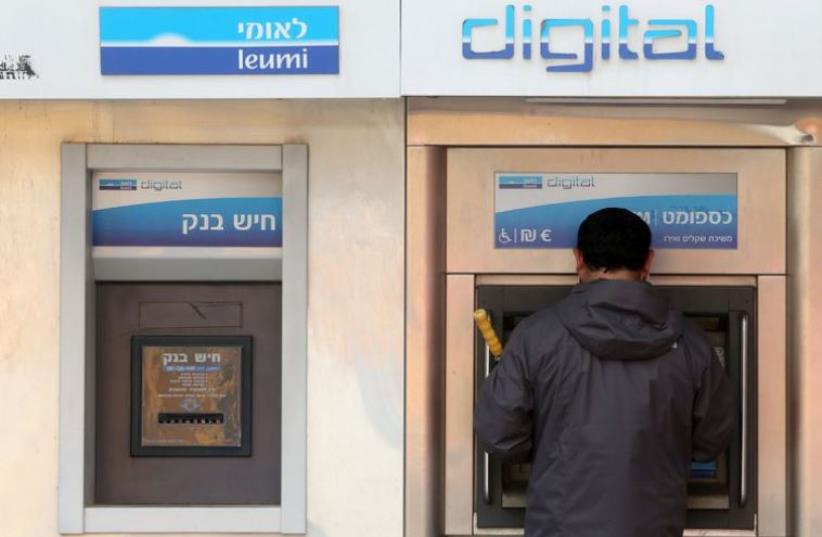 Man at an ATM in Israel
(photo credit: MARC ISRAEL SELLEM)
Advertisement
Dual American-Israeli citizens finally need to pay up.After years of the US Internal Revenue Service gradually baring down on American citizens living in Israel who evaded reporting income or paying taxes and numerous rounds of amnesty for those belatedly coming forward, September 30 has passed and a new Israel-US agreement has gone into effect with teeth for those who keep trying to hide.Mary F. Voce, head of Greenberg Traurig’s International Tax Practice, told The Jerusalem Post on Wednesday that “now that the regulations have gone into effect, those who did not do their tax homework are at greater risk of getting penalized, because the government now has effective tools to enforce the rules.”Greenberg Traurig, the only major international law firm with a full service office in Israel, is handling the issue on both sides of the ocean.What is this new American law and what are its implications? The Foreign Account Tax Compliant Act entails an agreement that the US has brought many other nations to sign on to in order to help track American citizens trying to evade taxes on overseas income or by living overseas.The agreement and corresponding legislation came about when “the US Treasury, Congress and the IRS lost their [sense of] humor for funds stashed offshore,” Voce said.Israel signed on to FATCA’s requirements in 2014 for it to share financial information of US citizens living in Israel and who have financial stakes held in Israeli financial institutions.The Knesset passed a law creating a domestic obligation to comply with that agreement in September and it got past a High Court of Justice objection in the same month.It is expected to “have a significant effect” for US residents and citizens living abroad who have not been reporting foreign income to the IRS, while having “no real effect” on those who have been reporting foreign income, explained Voce.What happens to US citizens who still do not report? According to Voce, FATCA says that “any financial institution and many companies receiving payment from the US must report its account holders and creditors to the US.”Those institutions that do not comply face a 30% withholding tax on payments received from the US.This means financial institutions doing business with the US must go through the list of their account holders and dig deep to find whether they are US residents or citizens.They must then report their findings to the Israeli tax authorities, who give the findings to the US.FATCA is not totally open and shut. Individuals and financial institutions were given until September 30 to file objections to their financial information being transferred to the Israel Tax Authority and then to the IRS.But without a valid objection, the US can pull or refuse to renew passports of US citizens who are behind in their tax statements.Israeli financial institutions can also take action against recalcitrant US citizen account holders. If US citizen account holders refuse to give over their information, they can tell the account holder that they are using his funds to pay the 30% US withholding tax or can close the account.Putting it bluntly, Voce said that many Israeli financial institutions may just “not want to deal with it.”Which financial institutions must report their US citizens’ financial information under FATCA? The broadly defined list includes banks, insurance companies, investment funds, trusts which are professionally managed and others.Government entities, pension funds and various international organizations are exempt from FATCA’s requirements, but essentially most commercial finance institutions fall under its authority. Even some nonfinancial foreign entities must comply with FATCA if 50% of their income is passive, explained Voce.There is one more bright side and dark side to FATCA.It could be worse, noted Voce.The OECD’s common reporting standards dig even deeper than the US’s FATCA into financial mazes, going all the way until the veil is pierced to find the ultimate financial beneficiary behind the complex financial entities.The dark side is that the financial scrutiny will get worse. Israel has already signed on to those OECD standards for the future – with their requirements set to kick in in 2018.