The Brits that want to see Netanyahu behind bars

Protestors, including British MP, say instead of welcoming the Israeli PM to London, Cameron should be imposing sanctions on him. 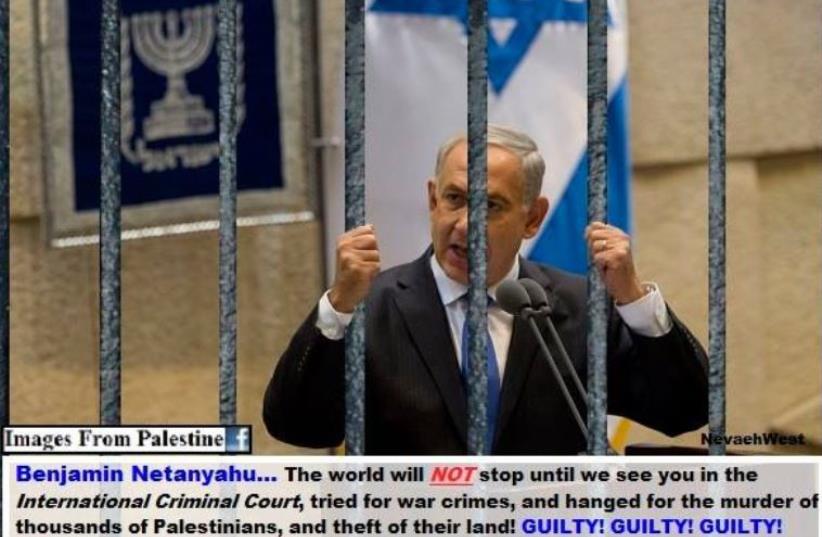 UK protesters release anti-Netanyahu propaganda pictures‏
(photo credit: SOCIAL MEDIA)
Advertisement
Prime Minister Benjamin Netanyahu will visit London on Wednesday, where he will be welcomed by his friend and ally British Prime Minister David Cameron. “The visit will provide the opportunity to explore new bilateral cooperation in a number of fields,” the Embassy of Israel in London said ahead of the visit, “and to discuss regional issues affecting both countries.”When Netanyahu’s convoy reaches Downing Street, however, he may notice that not everyone is happy about his trip. Several anti-Israeli organizations are planning a protest under the slogan “We tell Cameron: Netanyahu not welcome in the UK.”“Mr Cameron should get his priorities straight”, says Hugh Lanning, Chair of Palestine Solidarity Campaign who claims to have sent Cameron a letter with 10 thousand signatures, calling on the British prime minister to cancel Netanyahu's visit and instead impose sanctions and an arms embargo on Israel. “We want to know why David Cameron is welcoming a man directly responsible for UN-identified war crimes to the UK,” he states. “His welcome for Netanyahu sends out a very negative message about the UK government’s attitude towards Israel’s serial human rights abuses and the war crimes it committed in Gaza last year.”Participating in the protest is also Member of Parliament Tommy Sheppard of the Scottish National Party, who will be a keynote speaker.“I want to register on behalf of myself and my SNP colleagues a concern about Mr. Netanyahu being welcomed by Cameron to London when we think the British government should be trying to put pressure on the Israeli government to change some of its policies with regard to settlements, the occupied territories, treatment of Palestinians and actions in Gaza,” Sheppard said in an interview with The Jerusalem Post. “I believe the current policies of the Israeli government are probably the current largest obstacles to achieving peace in the Middle East.” 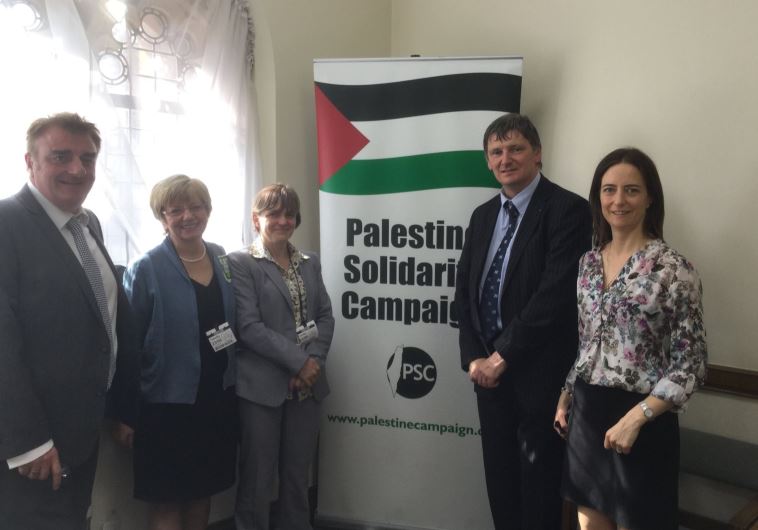 MP Tommy Sheppard (left) meets Pro-Palestinian activistsOn the heels of an anti-Semitic attack in Manchester on Monday, the Post questioned Sheppard over whether an anti-Israel protest could snowball into an anti-Jewish one, in light of oft seen tendencies to confuse the two. “Not if I have anything to do with it,” the MP responded, saying he is very clear on the difference between criticizing the Israeli government -- which he describes as “belligerent”-- and attacking the Jewish religion. Addressing his views on Hamas -- which was also accused of war crimes in the last Gaza war -- Sheppard said he thinks the terrorist organization needs to be part of the conversation about Middle East peace. Sheppard himself shies away from using the EU-designated term “terrorist organization” as a label for Hamas: "They represent a significant strand within Palestinian opinion and they have to be part of the solution rather than part of the problem." He opines that if Hamas were involved rather than ostracized, Palestinian rockets on Israel could be stopped.This protest is actually the climax of a long internet campaign that started on August 7, when a formal petition calling for Netanyahu’s arrest in the UK, created a media buzz that helped it reach more than 105 thousand signatures. “Benjamin Netanyahu is to hold talks in London this September.” The petitions states. “Under international law he should be arrested for war crimes upon arrival in the UK for the massacre of over 2000 civilians in 2014.” 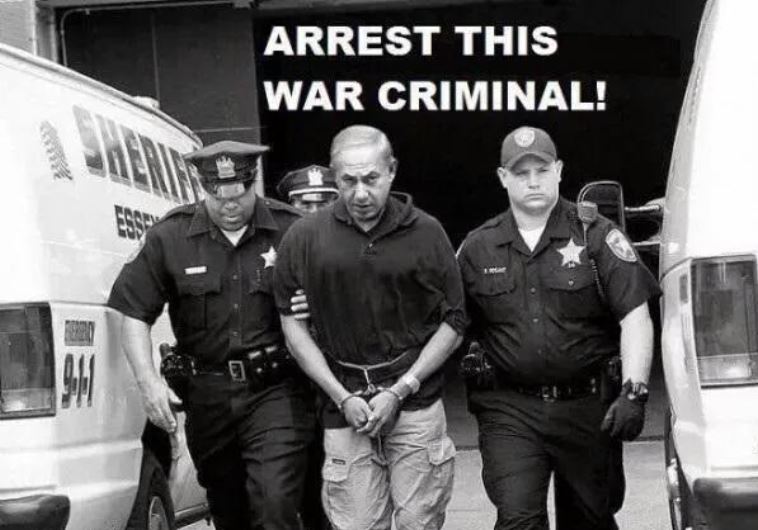 UK protesters release anti-Netanyahu propaganda picture
The government response was sharp and decisive: “Under UK and international law, visiting heads of foreign governments, such as Prime Minister Netanyahu, have immunity from legal process, and cannot be arrested or detained.”The government response was no surprise to petition initiator Damian Moran. “I didn’t really expect anything to happen,” admits 38-year-old Mancunian Moran in an interview with the Post, “For sure not with the UK’s current Prime Minister Cameron who supported South African apartheid and supports the current apartheid in Israel, but the petition does send a clear message that he (Netanyahu) is not welcome in the UK and that we haven’t forgotten his crimes.” But I cannot take the credit for all the hard work that has been done for this to go viral. I have a few good friends that I network with and they did all the hard work.” 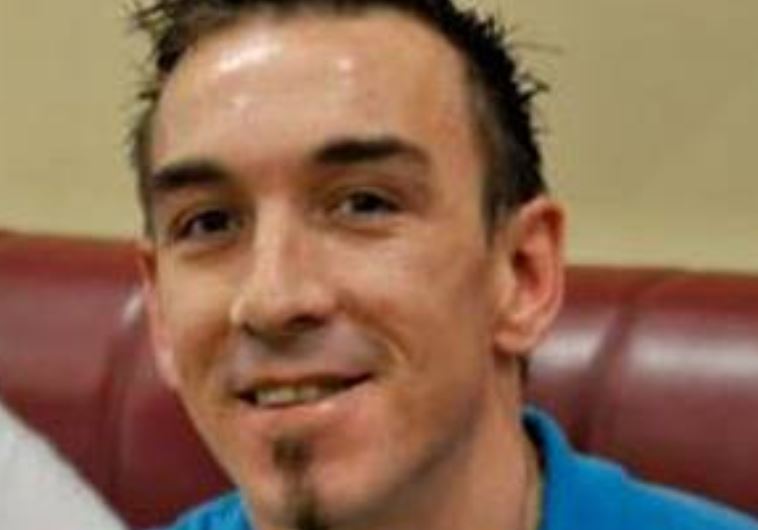 Some of his “few good friends” as he calls them are actually activists for numerous anti-Israeli, pro-BDS organizations, that are conducting an aggressive campaign, including graphic images, some of which have anti-Semitic undertones. One of these activists, who requested not to disclose his details out of fear of being heckled by pro-Israel activists - agreed to share his views and tactics with the Post.“Are we anti-Semites? anti Jewish?”, he asks and answers, “No. We do not campaign against Jewish people. Where is our campaign against Jewish people living in Poland or The USA? We don't have one. We campaign against the illegal occupation of Palestine by Israel.”This London based activist calls himself a “human right activist”, but has no problem tweeting pictures of Israeli leaders in Nazi uniforms, or horrific illustrations depicting IDF soldiers as vicious murderers. 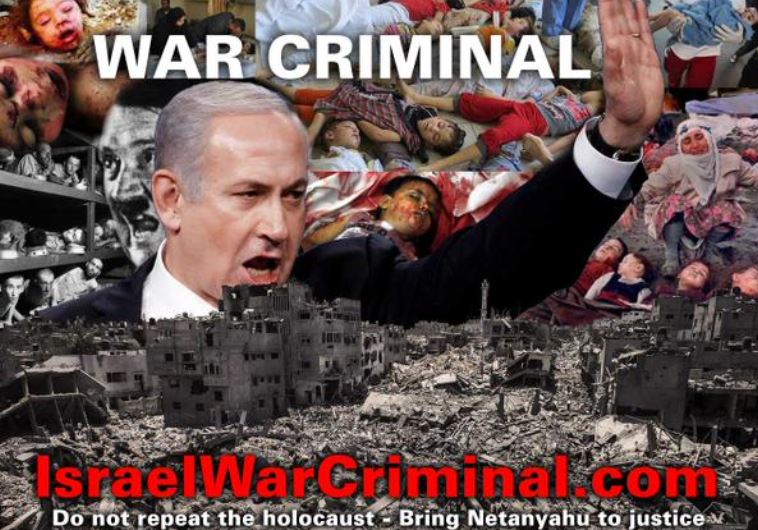 He claims that many people in the UK would like to see Netanyahu behind bars. “Anyone who saw how (Palestinian youth) Abu Khdeir was burned alive, anyone who saw Israeli people gathered on a hillside to watch and be entertained by children being killed in Gaza would understand why we don’t want anything to do with Israel.”Netanyahu will land in the UK, he won’t not be arrested, and he will meet and talk to Cameron on numerous subjects. Are these protesters just a noisy minority? Could be, but it does shine a light on Israel's diplomatic challenges in a not-always friendly Europe.